B. pertussis causes whooping cough, the most common vaccine-preventable disease among children.

B. pertussis causes whooping cough, the most common vaccine-preventable disease among children.

Whooping cough is also known as pertussis. Incubation period varies from 7 to 10 days. The disease typically has three stages (Fig. 39-2): (a) catarrhal stage, (b) paroxysmal stage, and (c) con-valescent stage.

Catarrhal stage: This is the first stage of whooping cough.This stage resembles that of upper respiratory tract infection with running nose, nasal congestion, sneezing, malaise, and 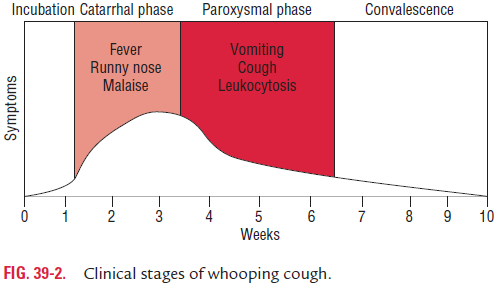 occasional cough. A low-grade fever may also be seen. This phase typically lasts 1–2 weeks. This stage is highly infectious because of the production of large number of bacteria during this stage of the disease.

Paroxysmal stage: This is the second stage of the disease. Thisstage is characterized by classic whooping cough or paroxysms. Each paroxysm consists of a series of repetitive intense and drawn out bouts of cough followed by an inspiratory whoop. The attack is more frequent at night with an average 15 attacks in a period of 24 hours. The paroxysm may end frequently with vomiting and exhaustion. During this stage, production of mucus in the respiratory tract is much frequent and is par-tially responsible for causing obstruction of the respiratory tract. Duration of this stage is highly variable, lasting within 1–6 weeks up to 10 weeks.

Convalescent stage: This is the third stage of the disease,which may last for weeks or months. It is characterized by a chronic cough that becomes less paroxysmal. This stage is marked by many complications. These include subconjunc-tival hemorrhage, respiratory distress, secondary bacterial pneumonia, and neurological complications, such as convul-sions. These neurological complications may result in per-manent sequelae, such as epilepsy, paralysis, blindness, and deafness.