The aetiology of most common mental health problems is poorly under-stood.

The aetiology of most common mental health problems is poorly under-stood. In most cases there appears to be interplay between genes and environment with polygenic pathways, multiple potential environmental risk factors and complex gene x environment interactions and associa-tions (Fig. 16.1). As a consequence the simple relationship depicted by example 1 is rare. Example 1 does, however, remind us that one condition may develop into another, e.g. the progression of oppositional defiant disorder to conduct disorder. Reverse causality is also possible e.g. head injury caused by impulsive risk taking behaviours s to ADHD. It is also the case that the presenting condition, for instance depression, may be s to earlier struggles with an eating disorder (example 2). The co-occurrence of disorders is common in child and adolescent mental health. Disorders A and B in examples 3 and 4 above are comorbid. An example of 3 is sexual abuse acting as a non-specific risk factor for later drug and alcohol use and deliberate self-harm. In example 4, the two conditions may co-occur, but are aetiologically unrelated. Other potential relationships between A and B are possible and indeed most cases will be much more complex than depicted here. 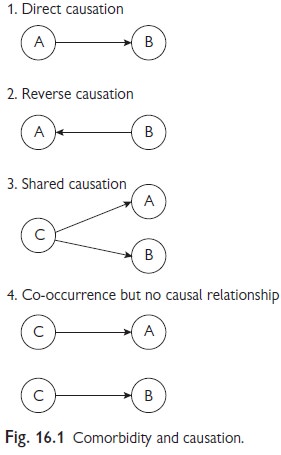