Home | | Modern Pharmacology with Clinical Applications | Oxidative and Reductive Enzymes: Phase I Reactions
Posted On :  22.12.2017 02:43 am

Phase I enzymes act by causing the drug molecule to undergo oxidation or more rarely, reduction.

Phase I enzymes act by causing the drug molecule to undergo oxidation or more rarely, reduction. Examples of oxidation reactions carried out by phase I enzymes are listed in Table 4.1 and encompass a broad range of drugs with varying chemical structures. However, as dis-cussed later, there is still a great deal of substrate speci-ficity within a given enzyme family. 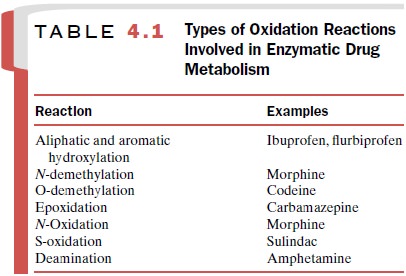 The cytochrome P450 (CYP450) enzyme superfamily is the primary phase I enzyme system involved in the ox-idative metabolism of drugs and other chemicals. These enzymes also are responsible for all or part of the me-tabolism and synthesis of a number of endogenous com-pounds, such as steroid hormones and prostaglandins.

Though it was originally described as the CYP450 en-zyme, it is now apparent that it is a group of related en-zymes, each with its own substrate specificity. To date, 12 unique isoforms (e.g., CYP3A4, CYP2D6) have been identified as playing a role in human drug metabolism, and others may be discovered. These isoforms, along with examples of compounds for which each isoform plays a substantial role in their metabolism, are listed in Table 4.2. More than one CYP isoform may be involved in the me-tabolism of a particular drug. For example, the calcium channel blocking drug verapamil is primarily metabolized by CYP3A4, but CYPs 2C9, 2C8 and 2D6 participate to some degree, particularly in the secondary metabolism of the verapamil metabolites. Thus, the degree to which a drug interaction involving competition for a CYP isoform may occur will depend on the extent of metabolism of each compound that can be attributed to that isoform. The more isoforms involved in the metabolism of a drug, the less likely is a clinically significant drug interaction.

Substrate Specificity of the CYP Enzymes

CYP3A4 is thought to be the most predominant CYP isoform involved in human drug metabolism, both in terms of the amount of enzyme in the liver and the vari-ety of drugs that are substrates for this enzyme isoform.

This isoform may account for more than 50% of all CYP-mediated drug oxidation reactions, and CYP3A4 is likely to be involved in the greatest number of drug–drug interactions. The active site of CYP3A4 is thought to be large relative to other isoforms, as evi-denced by its ability to accept substrates up to a molec-ular weight of 1200 (e.g., cyclosporine). This active site size allows drugs with substantial variation in molecular structure to bind within the active site. However, the fact that two drugs are metabolized predominantly by CYP3A4 does not mean that coadministration will re-sult in a drug–drug interaction, since drugs can bind in different regions of the CYP3A4 active site, and these binding regions may be distinct. In fact, it is believed that two drugs (substrates) can occupy the active site simul-taneously, with both available for metabolism by the en-zyme. This finding helps account for a number of absent interactions that would have been predicted to occur based on strict substrate specificity rules.

CYP3A5, whose amino acid sequence is similar to that of CYP3A4, appears to possess roughly the same substrate specificity characteristics as CYP3A4. How-ever, it differs in that it is not present in all individuals. Thus, patients expressing both CYP3A4 and CYP3A5 have the potential to exhibit increased metabolism of CYP3A substrates as compared to individuals express-ing only the CYP3A4 isoform.

The second most common CYP isoform involved in human drug metabolism is CYP2D6. It may account for 30% of the CYP-mediated oxidation reactions involv-ing drugs, including the metabolism of drugs in such diverse therapeutic categories as antipsychotic agents, tricyclic antidepressants, β-blocking agents, and opioid analgesics. Though this isoform accepts a number of drugs as substrates, its relative abundance in the liver is quite low. CYP2D6 is most known for its propensity to exhibit genetic polymorphisms.

The other isoform responsible for a substantial por-tion (about 10%) of the CYP-mediated drug oxidation reactions is CYP2C9. This isoform metabolizes several clinically important drugs with narrow therapeutic in-dices. Two of these drugs are the antiepileptic agent phenytoin and the anticoagulant warfarin. Any change in the metabolism of these two drugs, either increased or decreased, can have profound adverse effects. CYP2C9 appears to prefer weakly acidic drugs as sub-strates, which limits the number of drugs metabolized by this isoform, since most drugs are weak bases).

The remaining CYP isoforms involved in human drug metabolism (Table 4.2) are present in the liver in varying amounts, and each is thought to contribute 2–3% or less of the CYP-mediated drug oxidation reac-tions. Though they may not be involved in the metabo-lism of a broad range or significant number of drugs, if they are the primary enzyme responsible for the metab-olism of the drug of interest, then their importance in that instance is obviously increased.

Regulation of the CYP Enzymes

CYP450 enzymes can be regulated by the presence of other drugs or by disease states. This regulation can ei-ther decrease or increase enzyme function, depending on the modulating agent. These phenomena are com-monly referred to as enzyme inhibition and enzyme in-duction, respectively.

Enzyme inhibition is the most frequently observed re-sult of CYP modulation and is the primary mechanism for drug–drug pharmacokinetic interactions. The most common type of inhibition is simple competitive inhibi-tion, wherein two drugs are vying for the same active site and the drug with the highest affinity for the site wins out. In this scenario, addition of a second drug with greater affinity for the enzyme inhibits metabolism of the primary drug, and an elevated primary drug blood or tissue concentration is the result. In the simplest case, each drug has its own unique degree of affinity for the CYP enzyme active site, and the degree of inhibition depends on how avidly the secondary (or effector) drug binds to the enzyme active site. For example, ketocona-zole and triazolam compete for binding to the CYP3A4 active site and thus exhibit their own unique rate of me-tabolism. However, when given concomitantly, the me-tabolism of triazolam by the CYP3A4 enzyme (essen-tially the only enzyme that metabolizes triazolam) is decreased to such a degree that the patient is exposed to 17 times as much of parent triazolam as when keto-conazole is not present. Table 4.3 lists the common CYP isoforms and representative inhibitory agents. 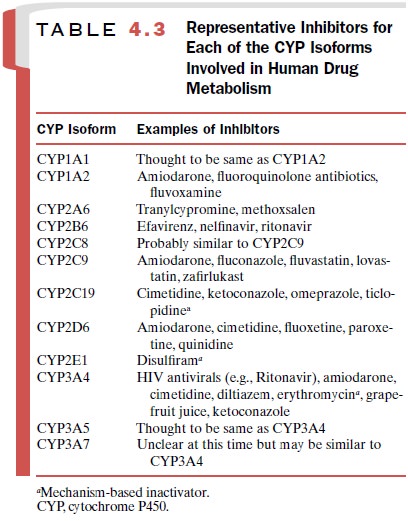 A second type of CYP enzyme inhibition is mecha-nism-based inactivation (or suicide inactivation). In this type of inhibition, the effector compound (i.e., the in hibitor) is itself metabolized by the enzyme to form a reactive species that binds irreversibly to the enzyme and prevents any further metabolism by the enzyme. This mechanism-based inactivation lasts for the life of the enzyme molecule and thus can be overcome only by the proteolytic degradation of that particular enzyme molecule and subsequent synthesis of new enzyme pro-tein. A drug that is commonly used in clinical practice and yet is known to be a mechanism-based inactivator of CYP3A4 is the antibiotic erythromycin.

Induction of drug-metabolizing activity can be due ei-ther to synthesis of new enzyme protein or to a decrease in the proteolytic degradation of the enzyme. Increased enzyme synthesis is the result of an increase in messen-ger RNA (mRNA) production (transcription) or in the translation of mRNA into protein. Regardless of the mechanism, the net result of enzyme induction is the in-creased turnover (metabolism) of substrate. Whereas one frequently associates enzyme inhibition with an in-crease in potential for toxicity, enzyme induction is most commonly associated with therapeutic failure due to in-ability to achieve required drug concentrations.

Table 4.4 lists representative inducers of each of the CYP isoforms. No inducers of CYP2D6 have been iden-tified. 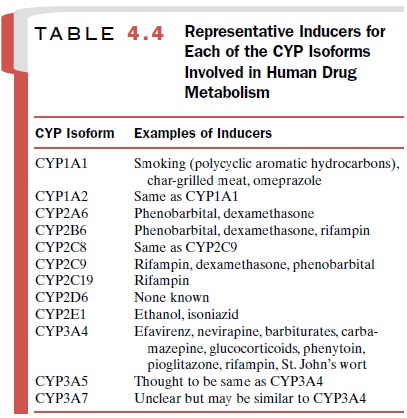 The time course of enzyme induction is important, since it may play a prominent role in the duration of the effect and therefore the potential onset and offset of the drug interaction. Both time required for synthesis of new enzyme protein (transcription and translation) and the half-life of the inducing drug affect the time course of induction. An enzyme with a slower turnover rate will require a longer time before induction reaches equilibrium (steady state), and conversely, a faster turnover rate will result in a more rapid induction. With respect to the drug inducer, drugs with a shorter half-life will reach equilibrium concentrations sooner (less time to steady state) and thus result in a more rapid maximal induction, with the opposite being true for drugs with a longer half-life.

The flavin monooxygenases (FMOs) are a family of five enzymes (FMO 1–5) that operate in a manner analo-gous to the cytochrome P450 enzymes in that they oxi-dize the drug compound in an effort to increase its elim-ination. Though they possess broad substrate specificity, in general they do not play a major role in the metabo-lism of drugs but appear to be more involved in the me-tabolism of environmental chemicals and toxins.