Excretion in Other Body Fluids

Excretion of drugs into sweat and saliva occurs but has only minor importance for most drugs.

EXCRETION IN OTHER BODY FLUIDS

Excretion of drugs into sweat and saliva occurs but has only minor importance for most drugs. The mechanisms involved in drug excretion are similar for sweat and saliva. Excretion mainly depends on the diffusion of the un-ionized lipid-soluble form of the drug across the ep-ithelial cells of the glands. Thus, the pKa of the drug and the pH of the individual secretion formed in the glands are important determinants of the total quantity of drug appearing in the particular body fluid. It is not definitely established whether active drug transport occurs across the ducts of the glands.

Lipid-insoluble compounds, such as urea and glyc-erol, enter saliva and sweat at rates proportional to their molecular weight, presumably because of filtration through the aqueous channels in the secretory cell membrane. Drugs or their metabolites that are excreted into sweat may be at least partially responsible for the dermatitis and other skin reactions caused by some therapeutic agents. Substances excreted into saliva are usually swallowed, and therefore their fate is the same as that of orally administered drugs (unless expectora-tion is a major characteristic of a person’s habits). The excretion of a drug into saliva accounts for the drug taste patients sometimes report after certain com-pounds are given intravenously.

Many drugs in a nursing mother’s blood are detectable in her milk (Table 4.7). The ultimate concentration of the individual compound in milk will depend on many fac-tors, including the amount of drug in the maternal blood, its lipid solubility, its degree of ionization, and the extent of its active excretion. Thus, the physico-chemical properties that govern the excretion of drugs into saliva and sweat also apply to the passage of drugs into milk. 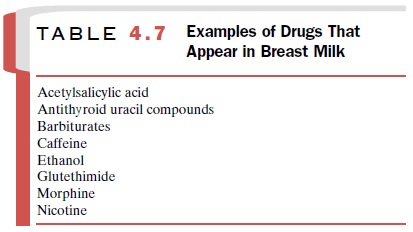 Since milk is more acidic (pH 6.5) than plasma, basic compounds (e.g., alkaloids, such as morphine and codeine) may be somewhat more concentrated in this fluid. In contrast, the levels of weak organic acids will probably be lower than those in plasma. In general, a high maternal plasma protein binding of drug will be associated with a low milk concentration.

A highly lipid-soluble drug should accumulate in milk fat. Low-molecular-weight un-ionized water-soluble drugs will diffuse pas-sively across the mammary epithelium and transfer into milk. There they may reside in association with one or more milk components, for example, bound to protein such as lactalbumin, dissolved within fat globules, or free in the aqueous compartment. Substances that are not electrolytes, such as ethanol, urea, and antipyrine, readily enter milk and reach approximately the same concentra-tion as in plasma. Compounds used in agriculture also may be passed from cows to humans by this route. Finally, antibiotics such as the tetracyclines, which can function as chelating agents and bind calcium, have a higher milk than plasma concentration.

Both maternal and infant factors determine the final amount of drug present in the nursing child’s body at any particular time. Variations in the daily amount of milk formed within the breast (e.g., changes in blood flow to the breast) as well as alterations in breast milk pH will affect the total amount of drug found in milk. In addition, composition of the milk will be affected by the maternal diet; for example, a high-carbohydrate diet will increase the content of saturated fatty acids in milk.

The greatest drug exposure occurs when feeding be-gins shortly after maternal drug dosing. Additional fac-tors determining exposure of the infant include milk vol-ume consumed (about 150 mL/kg/day) and milk composition at the time of feeding. Fat content is highest in the morning and then gradually decreases until about 10 P.M. A longer feed usually results in exposure of the infant to more of a fat-soluble drug, since milk fat con-tent increases somewhat during a given nursing period.

Whether or not a drug accumulates in a nursing child is affected in part by the infant’s ability to elimi-nate via metabolism and excretion the ingested com-pound. In general, the ability to oxidize and conjugate drugs is low in the neonate and does not approach full adult rates until approximately age 6. It follows, there-fore, that drug accumulation should be less in an older infant who breast-feeds than in a suckling neonate.

Although abnormalities in fetal organ structure and function can result from the presence of certain drugs in breast milk, it would be quite inappropriate to deny the breast-feeding woman appropriate and necessary drug therapy. A pragmatic approach on the part of both the physician and patient is necessary. Breast-feeding should be discouraged when inherent drug toxicity is known or when adverse pharmacological actions of the drug on the infant are likely. Infant drug exposure can be mini-mized, however, through short intermittent maternal drug use and by drug dosing immediately after breast-feeding.