The set of objects are considerably dissimilar from the remainder of the data o Example: Sports: Michael Jordon, Wayne Gretzky

The set of objects are considerably dissimilar from the remainder of the data o Example: Sports: Michael Jordon, Wayne Gretzky, ...

Indexing Structures such as R-tree (R+-tree), K-D (K-D-B) tree are built for the multi-dimensional database

The index is used to search for neighbors of each object O within radius D around that object.

Worst-case computation complexity is O(K*n2), K is the dimensionality and n is the number of objects in the dataset.

Cons: the index construction process may cost much time

Break data into blocks and then feed two blocks into the arrays.

Directly computes the distance between each pair of objects, inside the array or between arrays

Try to minimize the I/Os n cell based algorithm

Divide the dataset into cells with length

K is the dimensionality, D is the distance

·         Search a cell internally. If there are M objects inside, all the objects in this cell are not outlier

Distance-based outlier detection is based on global distance distribution

O2 would not normally be considered an outlier with regular distance-based outlier detection, since it looks at the global picture

Each data object is assigned a local outlier factor (LOF)

Objects which are closer to dense clusters receive a higher LOF

LOF varies according to the parameter MinPts 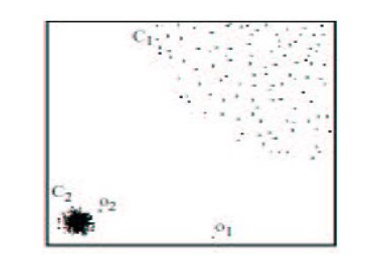 Objects that ―deviate‖ from this description are considered outliers

A cell value is considered an exception if it is significantly different from the expected value, based on a statistical model