What is Cluster? Cluster is a group of objects that belong to the same class.

Cluster is a group of objects that belong to the same class.

o  A cluster of data objects can be treated as a one group.

o  While doing the cluster analysis, the set of data into groups based on data similarity and then assign the label to the groups.

o  The main advantage of Clustering over classification.

o  Characterize their customer groups based on purchasing patterns.

o  In field of biology it can be used to derive plant and animal taxonomies, categorize genes with similar functionality and gain insight into structures inherent in populations.

o  Clustering also helps in classifying documents on the web for information discovery.

o  Clustering is also used in outlier detection applications such as detection of credit card fraud.

o  As a data mining function Cluster Analysis serve as a tool to gain insight into the distribution of data to observe characteristics of each cluster.

Requirements of Clustering in Data Mining

Here are the typical requirements of clustering in data mining:

o  Ability to deal with different kind of attributes - Algorithms should be capable to be applied on any kind of data such as interval based (numerical) data, categorical, binary data.

o  Discovery of clusters with attribute shape - The clustering algorithm should be capable of detect cluster of arbitrary shape. The should not be bounded to only distance measures that tend to find spherical cluster of small size.

o  Ability to deal with noisy data - Databases contain noisy, missing or erroneous data. Some algorithms are sensitive to such data and may lead to poor quality clusters.

o  Interpretability - The clustering results should be interpretable, comprehensible and usable.

The clustering methods can be classified into following categories:

Given k, the k-means algorithm is implemented in four steps:

3.     Assign each object to the cluster with the nearest seed point

Suppose we are given a database of n objects, the partitioning method construct k partition of data.

Each partition will represent a cluster and k≤n. It means that it will classify the data into k groups, which satisfy the following requirements:

o  Each group contain at least one object.

o  Each object must belong to exactly one group.

This method creates the hierarchical decomposition of the given set of data objects.:

This approach is also known as bottom-up approach. In this we start with each object forming a separate group. It keeps on merging the objects or groups that are close to one another. It keep on doing so until all of the groups are merged into one or until the termination condition holds.

This approach is also known as top-down approach. In this we start with all of the objects in the same cluster. In the continuous iteration, a cluster is split up into smaller clusters. It is down until each object in one cluster or the termination condition holds.

This method is rigid i.e. once merge or split is done, It can never be undone.

Here is the two approaches that are used to improve quality of hierarchical clustering:

Perform careful analysis of object linkages at each hierarchical partitioning.

BIRCH (1996): uses CF-tree and incrementally adjusts the quality of sub-clusters

Phase 1: scan DB to build an initial in-memory CF tree (a multi-level compression of the data that tries to preserve the inherent clustering structure of the data)

Phase 2: use an arbitrary clustering algorithm to cluster the leaf nodes of the CF-tree 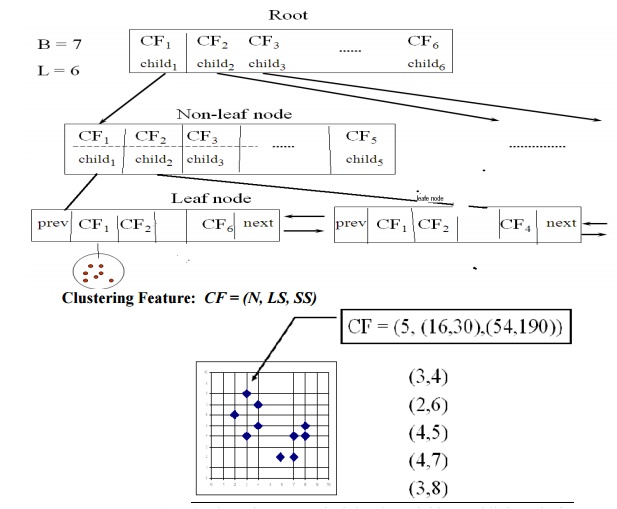 o   Use links to measure similarity/proximity

· Measures the similarity based on a dynamic model

Use a graph partitioning algorithm: cluster objects into a large number of relatively small sub-clusters

o   Use an agglomerative hierarchical clustering algorithm: find the genuine clusters by repeatedly combining these sub-clusters 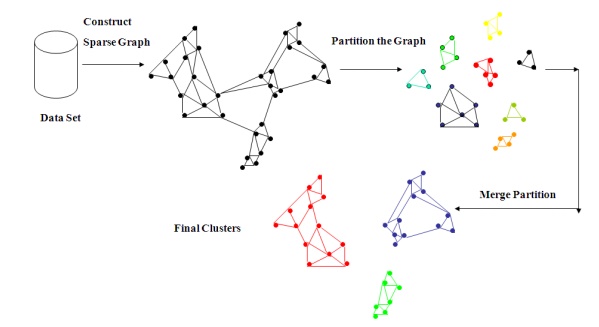 Clustering based on density (local cluster criterion), such as density-connected points

o   MinPts: Minimum number of points in an Eps-neighbourhood of that point

DBSCAN: Density Based Spatial Clustering of Applications with Noise

Relies on a density-based notion of cluster: A cluster is defined as a maximal set of density-connected points

Discovers clusters of arbitrary shape in spatial databases with noise

Retrieve all points density-reachable from p w.r.t. Eps and MinPts.

If p is a core point, a cluster is formed.

If p is a border point, no points are density-reachable from p and DBSCAN visits the next point of the database.

Continue the process until all of the points have been processed.

o   Can be represented graphically or using visualization techniques

o   Good for data sets with large amounts of noise

o   But needs a large number of parameters

o  The major advantage of this method is fast processing time.

o  It is dependent only on the number of cells in each dimension in the quantized space.

o  The spatial area area is divided into rectangular cells

o   Use a top-down approach to answer spatial data queries

·     How to apply wavelet transform to find clusters

·     Wavelet transform: A signal processing technique that decomposes a signal into different frequency sub-band (can be applied to n-dimensional signals)

·        Based on the assumption: Data are generated by a mixture of underlying probability distribution

o  In this method a model is hypothesize for each cluster and find the best fit of data to the given model.

o  This method also serve a way of automatically determining number of clusters based on standard statistics, taking outlier or noise into account. It therefore yields robust clustering methods.

o  An extension to k-means

Assign each object to a cluster according to a weight (prob. distribution)

New means are computed based on weighted measures

Starts with an initial estimate of the parameter vector

The rescored patterns are used to update the parameter updates

Patterns belonging to the same cluster, if they are placed by their scores in a particular component

o  Algorithm converges fast but may not be in global optima

A popular a simple method of incremental conceptual learning

Creates a hierarchical clustering in the form of a classification tree 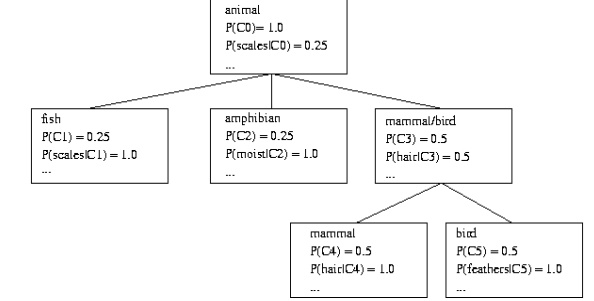 o  It maps all the points in a high-dimensional source space into a 2 to 3-d target space, s.t., the distance and proximity relationship (i.e., topology) are preserved as much as possible

o   Similar to k-means: cluster centers tend to lie in a low-dimensional manifold in the feature space

·     The winner and its neighbors learn by having their weights adjusted

Efficiency is improved by micro-clustering

E.g., having approximately same number of valued customers in each cluster?! — Can you solve it?