Chapter: Essentials of Anatomy and Physiology: The Integumentary System 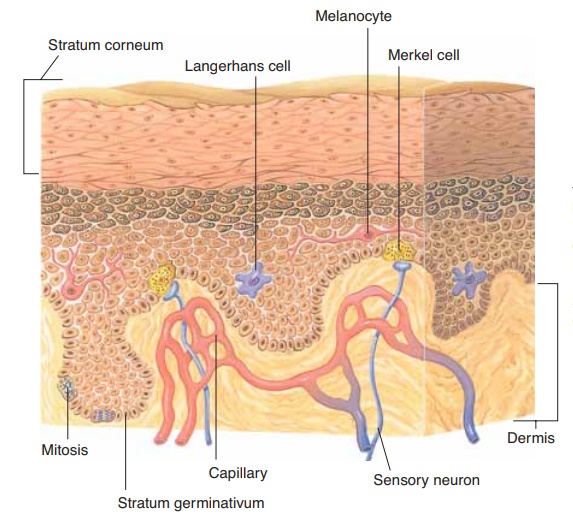 The epidermis is made of stratified squamous kera-tinizing epithelial tissue and is thickest on the palms and soles.

The two major layers of the skin are the outer epidermis and the inner dermis. Each of these layers is made of different tissues and has very different func-tions.

The epidermis is made of stratified squamous kera-tinizing epithelial tissue and is thickest on the palms and soles. The cells that are most abundant are called keratinocytes, and there are no capillaries present between them. Although the epidermis may be further subdivided into four or five sublayers, two of these are of greatest importance: the innermost layer, the stra-tum germinativum, and the outermost layer, the stra-tum corneum (Fig. 5–1). 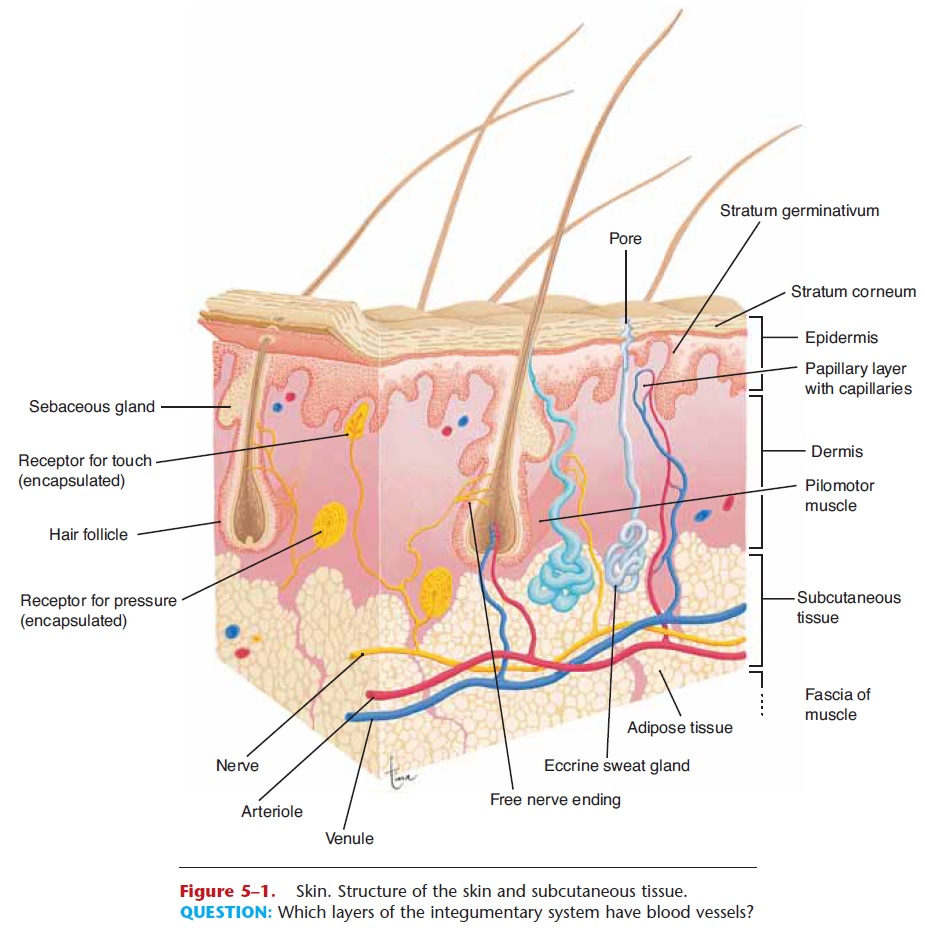 Figure 5–1. Skin. Structure of the skin and subcutaneous tissue.

QUESTION: Which layers of the integumentary system have blood vessels?

The stratum germinativum may also be called the stratum basale. Each name tells us something about this layer. To germinate means “to sprout” or “to grow.” Basal means the “base” or “lowest part.” The stratum germinativum is the base of the epidermis, the innermost layer in which mitosis takes place. New cells are continually being produced, pushing the older cells toward the skin surface. These cells pro-duce the protein keratin, and as they get farther away from the capillaries in the dermis, they die. As dead cells are worn off the skin’s surface, they are replaced by cells from the lower layers. Scattered among the keratinocytes of the stratum germinativum are very different cells called Merkel cells (or Merkel discs); these are receptors for the sense of touch (Fig. 5–2). 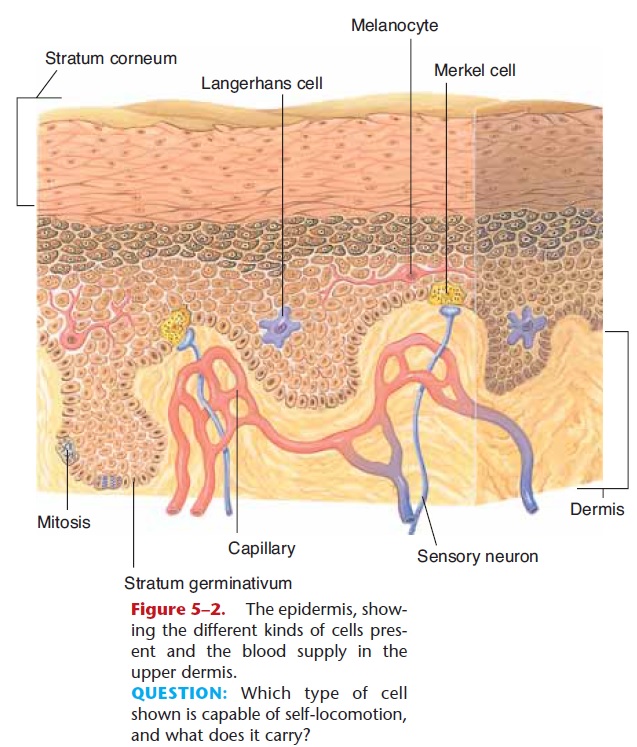 Figure 5–2. The epidermis, show-ing the different kinds of cells pres-ent and the blood supply in the upper dermis.

QUESTION: Which type of cell shown is capable of self-locomotion, and what does it carry?

The living keratinocytes are able to synthesize antimicrobial peptides called defensins; these and other chemicals are produced following any injury to the skin, as part of the process of inflammation. Defensins rupture the membranes of pathogens such as bacteria that may enter by way of breaks in the skin.

The living portion of the epidermis also produces a vitamin; the cells have a form of cholesterol that, on exposure to ultraviolet light, is changed to vitamin D (then modified by the liver and kidneys to the most active form, called 1,25-D, or calcitriol, which is con-sidered a hormone). This is why vitamin D is some-times referred to as the “sunshine vitamin.” People who do not get much sunlight depend more on nutri-tional sources of vitamin D, such as fortified milk. But sunlight is probably the best way to get vitamin D, and 15 minutes a day a few times a week is often enough. Vitamin D is important for the absorption of calcium and phosphorus from food in the small intestine; this function has been known for years. Recent research, however, suggests that vitamin D is also involved in maintaining muscle strength, especially in elderly peo-ple, in the functioning of insulin, and in some immune responses, where it may be protective for some types of cancer.

The stratum corneum, the outermost epidermal layer, consists of many layers of dead cells; all that is left is their keratin. The protein keratin is relatively waterproof, and though the stratum corneum should not be thought of as a plastic bag encasing the body, it does prevent most evaporation of body water. Also of importance, keratin prevents the entry of water. With-out a waterproof stratum corneum, it would be impos-sible to swim in a pool or even take a shower without damaging our cells.

The stratum corneum is also a barrier to pathogens and chemicals. Most bacteria and other microorgan-isms cannot penetrate unbroken skin. The flaking of dead cells from the skin surface helps remove micro-organisms, and the fatty acids in sebum help inhibit their growth. Most chemicals, unless they are corro-sive, will not get through unbroken skin to the living tissue within. One painful exception is the sap of poi-son ivy. This resin does penetrate the skin and initiates an allergic reaction in susceptible people. The inflam-matory response that characterizes allergies causes blisters and severe itching. The importance of the stratum corneum becomes especially apparent when it is lost.

Certain minor changes in the epidermis are undoubtedly familiar to you. When first wearing new shoes, for example, the skin of the foot may be sub-jected to friction. This will separate layers of the epi- dermis, or separate the epidermis from the dermis, and tissue fluid may collect, causing a blister. If the skin is subjected to pressure, the rate of mitosis in the stratum germinativum will increase and create a thicker epidermis; we call this a callus. Although cal-luses are more common on the palms and soles, they may occur on any part of the skin.

Within the epidermis are Langerhans cells, which are also called dendritic cells because of their branched appearance when they move (see Fig. 5–2). These cells originate in the red bone marrow, and are quite mobile. They are able to phagocytize foreign material, such as bacteria that enter the body through breaks in the skin. With such ingested pathogens, the Langerhans cells migrate to lymph nodes and present the pathogen to lymphocytes, a type of white blood cell. This triggers an immune response such as the production of antibodies (antibodies are proteins that label foreign material for destruction). Because of its position adjacent to the external environment, the skin is an important component of the body’s protective responses, though many of the exact aspects of this have yet to be determined.

Another type of cell found in the lower epidermis is the melanocyte, which is also shown in Fig. 5–2.

melanin. People of the same size have approxi-mately the same number of melanocytes, though these cells may differ in their level of activity. In people with dark skin, the melanocytes continuously produce large amounts of melanin. The melanocytes of light-skinned people produce less melanin. The activity of melanocytes is genetically regulated; skin color is one of our hereditary characteristics.

In all people, melanin production is increased by exposure of the skin to ultraviolet rays, which are part of sunlight and are damaging to living cells. As more melanin is produced, it is taken in by the epidermal cells as they are pushed toward the surface. This gives the skin a darker color, which prevents further expo-sure of the living stratum germinativum to ultraviolet rays. People with dark skin already have good protec-tion against the damaging effects of ultraviolet rays; people with light skin do not. Melanin also gives color to hair, though its protective function is confined to the hair of the head. Two parts of the eye obtain their color from melanin: the iris and the interior choroid layer of the eyeball.The functions of the epidermis and its cells are summarized in Table 5–1. 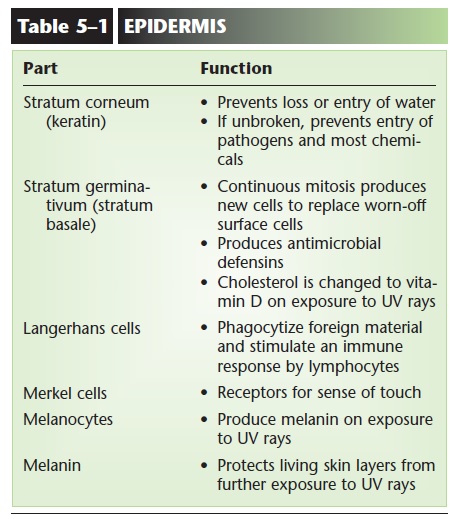