Origin, Evolution, and Growth of Consumerism

In the beginning of 20th century industrial economy reached a boom state.

Origin, Evolution, and Growth of Consumerism

Progressives, Women’s movements and Henry Ford and his assembly line would become characteristic icons of the time. As consumers took a closer look into the products they were buying and working class persons began to demand better working conditions, America hit a cross roads between industry and consumer satisfaction. Industrial reform for consumers would be an answerable to inconsistencies that existed between product, price, and consumer satisfaction. The first consumer wave marked a shift toward recognition “the centrality of consumers to the nation’s economy and polity (Cohen)” The companies began to make efforts towards targeting consumers on a more massive scale.

Progressives, as well as other American citizens began to realise the value in fighting for better quality goods. Consumers should be guaranteed for some type of accountability from industries in their quality for food and goods quality. Middle class progressive women began organisation like ‘The National Consumers League’ (NCL) in response to the substandard quality of goods and the lack of involvement by the government in protecting consumers against terrible food and other goods conditions.

The majority of the consumers in advanced countries are well educated, well –informed and are in a position to protect them. But our Indian situation is entirely different from the western, where adequate production and proper distribution of products exist. In India, industries have not achieved the level of affluence of technology and the existing markets of products run in shortages, adulteration, and black market prices. Indian people have less money at their disposal. The profit making attitude of the business failed to discharge social responsibilities of maintaining fair price, quality of goods and providing services etc. In short, consumerism is an outcome of sufferings and exploitation of consumers and some businessmen aim to make abnormal profit, which is at the cost of consumer’s safety and health. However, it has been accepted and agreed that “A consumer is a king of the market,” but in fact he is not. The majority of the Indian problems relating to consumers are adulteration, artificial scarcity, unreasonable prices etc.

There are different religious customs, traditions, and languages in India; and about three fourth of population live in rural areas, where cultivation is the source of livelihood, and there is wide disparity in the income of people. Majority of the people are mostly illiterate and have low income. In order to save or protect them, against exploitative practices of trade, consumerism has emerged and has been accepted as a defensive force to safeguard the interest of the customers.

The major causes of consumerism in India have been identified as rising prices, poor product performance and service quality, product shortages and deceptive advertising and inflation. Government has been very responsive to the consumer needs through legislative actions. Economic discontent has been generated out of spiralling inflation. Thus it has become necessary for the consumers to stand up for their rights through effective organisation in order to redress the grievances. The word consumerism came into existence in the year 1960.

Consumerism or consumer movement is an outcome of sufferings, and exploitations of consumers. It intends to shield the consumers from commercial terrorism and exploitative practices. Its aim is to safeguard their interests by establishing their rights and powers in relation to products and sellers.

Mr. Ralph Nader pioneered the fight against monopoly and unethical trade practices of large companies in the United States. He is considered to be the father of the Consumer Movement. He initially fought against automobile industry for violating safety standards and pollution control norms. But today, in almost all countries the consumer movement is well developed. Countries like Britan, Sweden, Netherlands, Denmark and even in Kenya have stringent laws against consumer exploitation in their respective countries. The United Nations General Assembly has adopted a set of general guidelines for consumer protection. 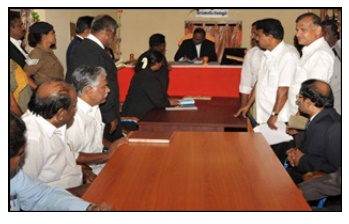