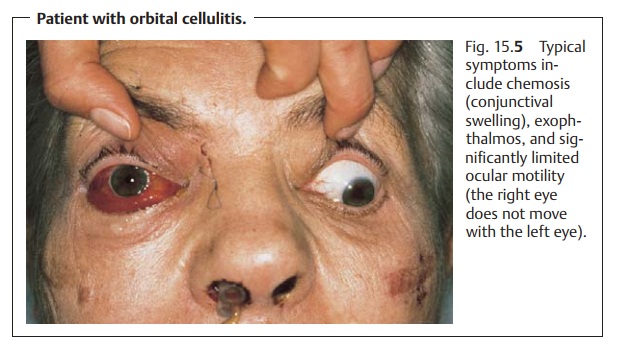 Acute inflammation of the contents of the orbital cavity with the cardinal symptoms of limited motility and general malaise.

Because of the close proximity of the orbital cavity to the paranasal sinuses, which are particularly susceptible to inflammation, orbital inflammation represents the second most frequent group of orbital disorders after Graves’ disease. Orbital cellulitis is the most severe of these.

Acute inflammation of the contents of the orbital cavity with the cardinal symptoms of limited motility and general malaise.

Orbital cellulitis is the most frequent cause of exophthalmos in children.

Acute orbital inflammation posterior to the orbital septum isusu-ally an inflammation that has spread from surrounding tissue. Over 60% of allcases (as high as 84% in children) may be classified as originating in the sinuses, especially the ethmoidal air cells and the frontal sinus. In infants, tooth germ inflammations may be the cause.Less frequently, this clinical pic-ture occurs in association with facial furuncles, erysipelas, hordeolum, panophthalmitis, orbital injuries, and sepsis.

Typical symptoms includeexophthalmoswithsevere chemosis (conjunctival swelling), eyelid swelling, and significantly limited ocular motility (“cemented” globe; see Fig. 15.5). Patients mayexhibit leukocytosis and an increased erythrocyte sedimentation rate. Where there is clinical evidence of suspected involvement of the paranasal sinuses, an ENT specialist should be consulted to evaluate the sinuses and initiate any necessary treatment. 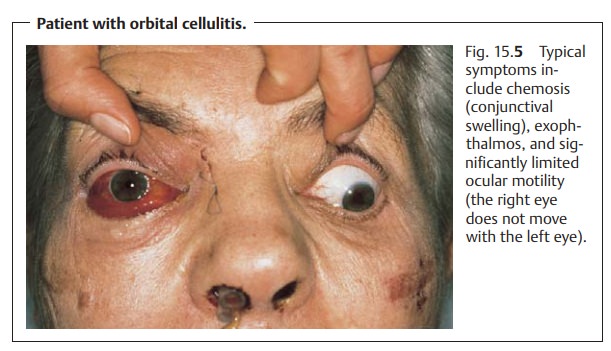 Preseptal cellulitis, which ismore frequently encoun-tered, should be excluded. The inflammation in preseptal cellulitis is anteriorto the orbital septum; chemosis and limited motility are absent. Rarer clinicalsyndromes that should also be considered in a differential diagnosis includean orbital pseudotumor, orbital periostitis which may be accompanied by a subperiosteal abscess, and an orbital abscess.

The crucial characteristic feature of orbital cellulitis for differential diag-nosis is the significantly limited ocular motility (“cemented” globe). A rhabdomyosarcoma should also be considered in children.

Orbital inflammation can lead toopticneuritis with subsequent atrophy and loss of vision. Purulent thrombophle-bitis of the orbital veins can result in cavernous sinus thrombosis with menin-gitis, cerebral abscess, or sepsis.