·              Empirical administration of naloxone, (can precipitate reaction in addicts).

––  Ipecac-induced emesis is not recommended because of the potential for CNS depression and seizures.

––  Consider prehospital administration of activated charcoal as an aqueous slurry in patients with a potentially toxic ingestion who are awake and able to protect their airway. Activated charcoal is most effec- tive when administered within one hour of ingestion.

b.  Naloxone is the antidote of choice for opiate poisoning,.

c.  The use of physostigmine salicylate (0.04 mg/kg IV)has been suggested for reversing respiratory depression if the regular opiate antidotes are not available, since it increases the acetylcholine content of the reticular formation of the brainstem which is suppressed by opiates. However, there is controversy regarding such a measure since physostigmine (unlike regular opiate antagonists) is a dangerous antidote with serious adverse effects.

It is effective against all opiates including pentazocine, but is not very effective against buprenorphine. Dramatic reversal of the following features is achieved: miosis, respiratory depression, hypotension, coma.

Dose: The usual initial dose is 1.2 mg for an adult and 0.4 mg for a child. The best route of administration is IV, but if venous access is difficult, the drug can be injected sublingually or intramuscularly, or even instilled down an endotracheal tube. Since the effect of a single bolus dose of naloxone is usually short-lived, repeated doses are required. Repeat doses of 2 mg may be given to achieve a clinical effect. Generally, if no response is observed after 10 mg has been administered, the diagnosis of opiate-induced toxicity should be questioned. Very large doses of naloxone (10 mg or more) may be required to reverse the effects of buprenorphine overdose. Some investigators state that a naloxone infusion is better than repeated injections. The following steps are suggested:

·     To determine the amount of naloxone (in mg) to add to the maintenance fluid for a 24-hour period, take the bolus dose required for initial response (in mg) and multiply by 2/3 and 24 (hrs).

·     To determine the desired rate of infusion (ml/hr), take the maintenance fluid, and divide by 24 (hrs)

This method is said to reduce the risk of possible fluid overload and pulmonary oedema. A continuous infusion of naloxone is espe-cially useful in circumstances of opiate overdose with long acting opiates. Naloxone can be diluted in normal saline or 5% dextrose, but should not be added in alkaline solutions. Any prepared solution of naloxone should be used up in 24 hours. Caution should be exercised in reversing opiate toxicity in addicts because of the risk of precipitating withdrawal reaction. Observe patients for evidence of CNS or respiratory depression for at least 2 hours after discontinuing the naloxone infusion.

The American Academy of Pediatrics recommends a neonatal dose of 0.1 mg/kg intravenously or intratracheally from birth until age 5 years or 20 kg body weight.

Naltrexone is a long-acting opiate antagonist which can be administered orally. It is usually used for treating opiate addiction. However, it must not be given to an opiate-dependant patient who has not been detoxified. A challenge dose of naloxone to confirm the lack of opiate dependence is recommended before beginning naltrexone.

Dose: 50 mg/day orally, which may have to be continued for several weeks or months.

Nalmefene is a naltrexone derivative with pure opiate antagonistic effects, and has a longer duration of effect than naloxone in acute opiate poisoning. It is usually given intravenously beginning with 0.1 mg, and if withdrawal reaction does not occur, 0.5 mg is admin-istered, followed by 1 mg in 2 to 5 minutes (if necessary). Nalmefene can also be given intramuscularly or subcutaneously

d. The use of drugs such as levorphanol and amiphena-zole is no more recommended today.

e. Convulsions may be treated with benzodiazepines in the usual manner (5 to 10 mg initially, repeat every 5 to 10 minutes as needed), though this is frequently not necessary if naloxone is available. Monitor for respira-tory depression, hypotension, arrhythmias, and the need for endotracheal intubation. Evaluate for hypoxia, electrolyte disturbances, and hypoglycaemia (or treat with intravenous dextrose 50 ml IV in an adult, or 2 ml/ kg in 25% dextrose for a child).

f. For hypotension: Infuse 10 to 20 ml/kg of isotonicfluid and place in Trendelenburg position. If hypoten-sion persists, administer dopamine (5 mcg per kg per min, progressing in 5 mcg per kg per min increments as needed), or noradrenaline (0.5 to 1 mcg per min, and titrate to maintain adequate blood pressure). Consider central venous pressure monitoring to guide further fluid therapy.

g. Prevention of rhabdomyolysis: Early aggressivefluid replacement is the mainstay of therapy and may help prevent renal insufficiency. Diuretics such as mannitol or furosemide may be needed to maintain urine output. Urinary alkalinisation is not routinely recommended.

·              A beta adrenergic blocker like propranolol (80 mg) is said to be quite effective in relieving the anxiety and craving associated with opiate addiction, but has no effect on physical symptoms. Alternatively, drugs such as clonidine can be used. Buprenorphine or naltrexone can also be used. Recent reports suggest favourable outcome with gabapentin combined with clonidine and naltrexone. The regimen suggested is clonidine 0.1 mg thrice a day for 7 days, followed by naltrexone 50 mg twice a day for 14 days, along with gabapentin 600 mg twice a day on all the 21 days.

·              Antispamodics for abdominal cramps associated with vomiting and diarrhoea.

·      Injection marks, dermal abscesses, scarring. Look for injec-tion marks in the antecubital fossae, forearms, back of the hands, neck, groin, and ankles.

·      Gross pulmonary oedema with froth exuding out of mouth and nostrils, especially in sudden heroin-related death.

·              Another frequent autopsy finding in heroin fatalities is undiagnosed pneumonia.

·      Congestion of liver with enlargement of hepatic lymph nodes. Chemical analysis of lymph nodes may reveal pres-ence of morphine.*

·      Myocardial damage, with focal lesions formed by small mono-nuclear inflammatory cells and with degenerated, necrotic myocardial fibres and congestion, has been shown to occur as a result of prolonged hypoxic coma following opiate intoxica-tion.

·      Samples of blood, urine, brain, liver, and bile must always be preserved for chemical analysis.

·              It is important to remember that infections such as serum hepa-titis and AIDS are common among intravenous drug abusers, and hence autopsies conducted in drug-related deaths must be done cautiously with necessary precautions.

·     Opiates are among the commonest of the drugs abused today in India. Heroin (brown sugar) is popular among all classes of addicts in metropolitan cities such as Mumbai, Delhi, Bangalore, etc. Opiates used for therapeutic purposes, e.g. morphine, pethidine, and pentazocine are more commonly abused by medical and paramedical personnel. Buprenorphine is emerging as a major drug of abuse even among non-medical personnel in recent times. Codeine which is easily available over the counter in the form of antitussive preparations is being increasingly abused especially by college-going youth.

·     Accidental deaths are not infrequent from overdose, particu-larly among intravenous abusers of heroin (“death on the needle”). Wound botulism, which has been associated with subcutaneous or intramuscular black tar heroin injections, has caused potentially lethal, descending, flaccid paralysis when Clostridium botulinum spores germinated in wounds, releasing neurotoxins.

·     “Cotton fever” is common among IV abusers, which is a febrile reaction that develops because these drugs are often filtered through cotton balls prior to being injected.

·   Suicidal deaths are also reported from time to time since opiates are reputed to cause a painless death. Homicides are rare, but a few cases have been documented in medical literature.

·   Body Packer Syndrome—Although this is more commonlyassociated with smuggling of cocaine, it has also been reported in the case of other drugs, especially heroin.

o     A “bodypacker” or “mule” is an individual who attempts to transport illicit drugs from one country to another by ingesting wrapped packages, or condoms (Fig 13.6), or balloons containing concentrated cocaine or heroin. After arrival at the destination, cathartics are self-administered and the packets are defaecated out. Sometimes rectal suppositories or disposable enemas are used. 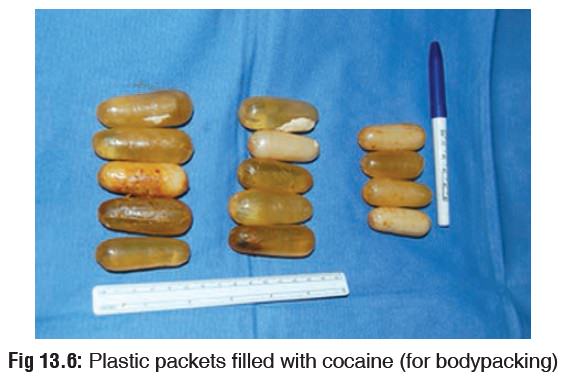 o     Although generally asymptomatic, in a few cases serious toxicity may result due to rupture of packets. Death due to intestinal obstruction and perforation has been reported in heroin body packers.

o     Diagnosis of an asymptomatic body packer can be accomplished with the help of an abdominal X-ray (Fig13.7), ultrasound, or CT scan. The last two methodsshould be resorted to only if X-ray is unclear. In some cases, faecal examination over a period of a few days may be necessary. Magnetic resonance does not visualise packets because of the lack of protons. 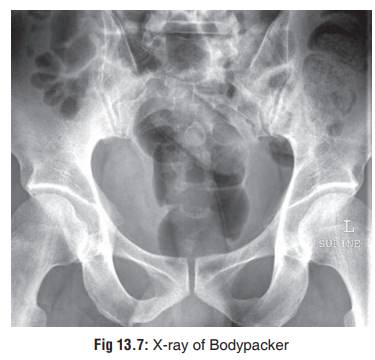 o     Asymptomatic patients should be treated by whole bowel irrigation with polythylene glycol solution. However some investigators do not approve of this method since the polythylene glycol can dissolve the heroin from a package, rupturing it and increasing absorption of heroin. Instead, a period of waiting is recommended so that all packages pass into the colon from the stomach, and then low-volume phosphosoda enemas or high-volume saline enemas are administered. Food ingestion must not be permitted until all packages have moved into the colon. Metoclopramide 10 mg, 8th hourly, may be administered to encourage gastric emptying. Bowel obstruction must be ruled out. It may be advisable to empty the rectum first by a bisacodyl suppository.