The basic structure of morphine (Fig. 26.1) can be al-tered in rather minor ways that drastically change the effects of the drug.

The basic structure of morphine (Fig. 26.1) can be al-tered in rather minor ways that drastically change the effects of the drug. Acetylation of the hydroxyl groups leads to the synthesis of heroin (diacetylmorphine), which has a much greater ability to pass the blood-brain barrier. In the brain, however, heroin is converted to morphine and monoacetyl morphine. Some researchers attribute heroin’s potent analgesic effects and rapid on-set of action solely to its conversion to morphine. Others contend that heroin produces analgesic effects distinct from the conversion to morphine and thus should be considered as a therapeutically useful anal-gesic. Heroin is not approved for medical use in the United States, although it is used therapeutically in other nations. 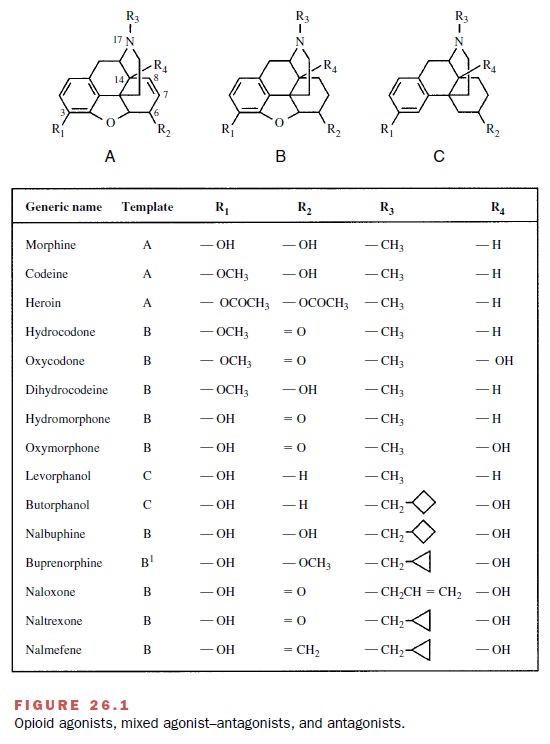 Morphine is glucuronidated in the liver at the phe-nolic hydroxyl group (C3). Protection of that group with a methyl group, as occurs in codeine and other codeine derivatives such as oxycodone, renders the molecule less susceptible to glucuronidation and decreases the first-pass effect in the liver. It is for this reason that codeine and its derivatives retain activity following oral administration to a greater degree than does morphine.

However, the glucuronidation of morphine at the hy-droxyl moiety on C6 leads to an active metabolite, morphine-6-glucuronide, which contributes to the activ-ity of morphine and extends its duration of action.

The endogenous opioids are naturally occurring pep-tides that are the products of four known gene families. The gene responsible for the production of the endo-morphins, a new class of endogenous opioids, has yet to be identified. The enkephalins, the first opioid peptides identified, were first discovered in the brain and were therefore given the name enkephalin, which means from the head. The dynorphins were so named because they were thought to be dynamic endorphins, having a wide range of activities in the body, a hypothesis that has proved to be accurate.

The endogenous opioids have been implicated in the modulation of most of the critical functions of the body, including hormonal fluctuations, thermoregulation, me-diation of stress and anxiety, production of analgesia, and development of opioid tolerance and dependence. The endogenous opioids maintain homeostasis, amplify signals from the periphery to the brain, and serve as neu-romodulators of the body’s response to external stimuli. As such, the endogenous opioids are critical to the main-tenance of health and a sense of well-being.

Opioid receptors and their precursor mRNAs are distributed throughout the brain and spinal cord. High levels of opioid binding have been found in the ascend-ing pathways for nociceptive transmission, including the dorsal horn of the spinal cord and in particular the sub-stantia gelatinosa lamina II. Other ascending tracts with high levels of binding include the spinothalamic tracts to the subcortical regions and limbic areas of the brain responsible for the discriminative and sensory aspects of pain and the euphoric effects of the drugs. Limbic ar-eas, including cortical sites and the amygdala, are in-volved in the anxiolytic effects of the drugs. Binding in the thalamus and hypothalamus is also very high. Binding in the hypothalamus is linked to the modula-tion of hormone release and to thermoregulation by the opioids and opioid peptides. Some descending pathways possess high levels of opioid receptors believed to be linked to the analgesic effects of the drugs. In addition, the receptor binding in medullary pathways has been linked to inhibitory neurotransmitter release in the dor-sal horn.

Opioid binding at medullary sites is consistent with the respiratory depressant effects of the drugs. Binding in the nucleus accumbens and the resultant release of dopamine by the μ- and δ-opioids is linked to the devel-opment of physical dependence. However, the κ-opioids, which also bind extensively in the nucleus accumbens, are linked to a decrease in dopamine release, possibly explaining their lower abuse liability. The localization of different receptor subtypes within different-size fiber pathways has been established. The μ- and δ-receptors appear associated with the large-diameter fibers, while the κ-receptors appear to be located in the small to medium-size fiber bundles of the dorsal root ganglia. Such differences may explain the modulation of specific types of nociceptive stimuli by the different opioid ago-nists and opioid peptides.

Most of the opioids are well absorbed from the GI tract in addition to being absorbed following transcutaneous administration. As described previously, the first-pass effect on drugs like morphine, which have a free hy-droxyl group in position 3, is glucuronidation by the liver. In the case of morphine, the conjugation to glu-curonide decreases the oral bioavailability of the drug. Following absorption, the drugs distribute rapidly to all tissues, although the distribution is limited by their lipophilicity. Fentanyl (highly lipophilic) distributes to the brain rapidly but also remains in fat, which serves as a slow-releasing pool of the drug. Certain of the drugs, notably methadone and fentanyl, have long half-lives inconsistent with their duration of action. This discrep-ancy is due to accumulation in various tissue and plasma reservoirs and redistribution from the brain to these reservoirs. Heroin passes readily into the brain. Codeine passes into the brain more readily than mor-phine, which is slow in crossing the blood-brain barrier. The drugs cross readily into fetal tissues across the pla- centa and therefore should be used with care during pregnancy and delivery. Moreover, glucuronidation by the fetus is slow, increasing buildup of the drugs and in-creasing their half-life in the fetus.

The majority of their metabolites are inactive with a few notable exceptions, such as morphine-6-glucuronide, which produces an analgesic effect; normeperidine and norpropoxyphene, which produce excitatory but not analgesic effects; and 6- -naltexol, which is less active than naltrexone as an antagonist but prolongs the action of naltrexone. Excretion of the metabolites requires ad-equate renal function, since excretion by routes other than the urine are of minor importance.

Opioid receptors are members of the G protein super-family of receptors. Drug-induced interaction with these receptors is associated with a decrease in activa-tion of the enzyme adenylyl cyclase and a subsequent decrease in cyclic adenosine monophosphate (cAMP) levels in the cell. Binding of opioids to their receptors produces a decrease in calcium entry to cells by de-creasing the phosphorylation of the voltage operating calcium channels and allows for increased time for the channels to remain closed. In addition, activation of opi-oid receptors leads to potassium efflux, and the result-ant hyperpolarization limits the entry of calcium to the cell by increasing the negative charge of the membrane to levels at which these calcium channels fail to activate. The net result of the cellular decrease in calcium is a de-crease in the release of dopamine, serotonin, and noci-ceptive peptides, such as substance P, resulting in block-age of nociceptive transmission.