Operation of Pumps in Series and Parallel

Operation of Pumps in Series and Parallel

Pumps are chosen for particular requirement. The requirements are not constant as per example the pressure required for flow through a piping system. As flow increases, the pressure required increases. In the case of the pump as flow increases, the head decreases. The operating condition will be the meeting point of the two curves representing the variation of head required by the system and the variation of head of the pump. This is shown in Figure.

The operating condition decides about the capacity of the pump or selection of the pump. If in a certain setup, there is a need for increased load; either a completely new pump may be chosen. This may be costlier as well as complete revamping of the setup. An additional pump can be the alternate choice. If the head requirement increases the old pump and the new pump can operate in series.

In case more flow is required the old pump and the new pump will operate in parallel. There are also additional advantages in two pump operation. When the Pump-load characteristics load is low one of the pump can operate with a higher efficiency when the load increases then the second pump can be switched on thus improving part load efficiency. The characteristics of parallel operation is depicted in Figure 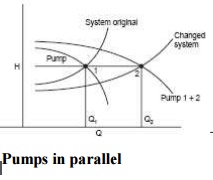 Providing a flow volume of Q2 as head H1. It is not necessary that similar pumps should be used. Suitable control system for switching on the second pump should be used in such a case. When the head requirement is changed with flow volume being the same, then the pumps should work in series. The characteristics are shown in Figure.

The flow requirement is Q. Originally head requirement was H1 met by the first pump alone. The new requirement is flow rate Q and head H2. This can be met by adding in series the pump2, which meets this requirement. It is also possible to meet changes in both head and flow requirements by the use of two pumps. Suitable control system should be installed for such purposes. 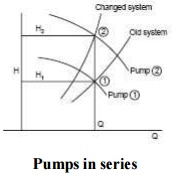 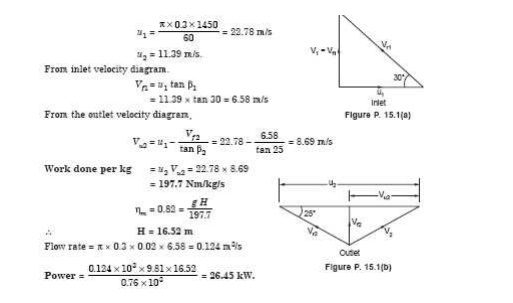 The pump manufacturer's specified margin of suction pressure above the boiling point of the liquid being pumped, is required to prevent cavitation. This pressure is called the 'Net Positive Suction Head' pressure (NPSH).

In order to ensure that a NPSH pressure is maintained, the Available NPSH should be higher than that required. The NPSH depends on the height and density of the liquid and the pressure above it.

Cavitations is a problem condition which may develop while a centrifugal pump is operating. This occurs when a liquid boils inside the pump due to insufficient suction head pressure. Low suction head causes a pressure below that of vaporization of the liquid, at the eye of the impeller. The resultant gas which forms causes the formation and collapse of 'bubbles' within the liquid. This, because gases cannot be pumped together with the liquid, causes violent fluctuations of pressure within the pump casing and is seen on the discharge gauge.

damage to the pump and, of course, cause pumping inefficiency.

3.    Throttle back on the discharge valve to decrease flow-rate.