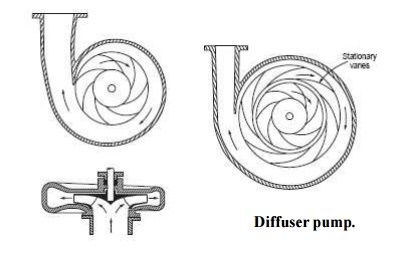 These are so called because energy is imparted to the fluid by centrifugal action of moving blades from the inner radius to the outer radius. The main components of centrifugal pumps are (1) the impeller, (2) the casing and (3) the drive shaft with gland and packing.

The liquid enters the eye of the impeller axially due to the suction created by the impeller motion. The impeller blades guide the fluid and impart momentum to the fluid, which increases the total head (or pressure) of the fluid, causing the fluid to flow out.

The fluid comes out at a high velocity which is not directly usable. The casing can be of simple volute type or a diffuser can be used as desired. The volute is a spiral casing of gradually increasing cross section. A part of the kinetic energy in the fluid is converted to pressure in the casing.

Figure shows a sectional view of the centrifugal pump. 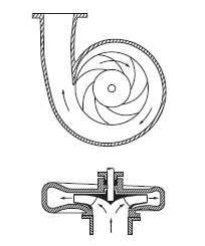 Gland and packing or so called stuffing box is used to reduce leakage along the drive shaft. By the use of the volute only a small fraction of the kinetic head can be recovered as useful static head.

A diffuser can diffuse the flow more efficiently and recover kinetic head as useful static head. A view of such arrangement is shown in figure Diffuser pump are also called as turbine pumps as these resembles Francis turbine with flow direction reversed. 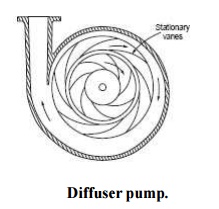 The impeller consists of a disc with blades mounted perpendicularly on its surface. The blades may of three different orientations.

These are (i) Radial, (ii) Backward curved, and (iii) Forward curved.

Backward and forward refers to the direction of motion of the disc periphery. Of these the most popular one is the backward curved type, due to its desirable characteristics, which reference to the  static    head  developed   and    power  variation with  flow     rate.

A simple  disc  with  blades mounted         perpendicularly on it  is  called  open impeller. If another disc is used to cover the blades, this type is called shrouded impeller. This is more popular with water pumps. Open impellers are well adopted for use with dirty or water containing solids. The third type is just the blades spreading out from the shaft.

These are used to pump slurries. Impellers may be of cast iron or bronzes or steel or special alloys as required by the application. In order to maintain constant radial velocity, the width of the impeller will be wider at entrance and narrower at the exit. The blades are generally cast integral with the disc. Recently even plastic material is used for the impeller. To start delivery of the fluid the casing and impeller should be filled with the fluid without any air pockets. This is called priming.

If air is present the there will be only compression and no delivery of fluid. In order to release any air entrained an air valve is generally provided

The one way foot value keeps the suction line and the pump casing filled with water.

As already mentioned, centrifugal pumps may be classified in several ways. On the basis of speed as low speed, medium speed and high speed pumps.

Single entry type and double entry type is another classification. Double entry pumps have  blades  on  both  sides  of  the  impeller  disc.  This  leads      to      reduction    in axial thrust and increase in flow for the same speed and diameter.

When the head required is high and which cannot  be  developed    by  a  single impeller,  multi   staging  is  used.  In  deep  well  submersible pumps     the     diameter is limited by the diameter of the bore well casing. In this case multi stage pump becomes a must. In multi stage pumps several impellers are mounted on the same shaft and the outlet flow of one impeller is led to the inlet of the next impeller and so on. The total head developed equals the sum of heads developed by all the stages.

Pumps may also be operated in parallel to obtain large volumes of flow. The characteristics under series and parallel operations are discussed later in the chapter. The classification may also be based on the specific speed of the pump.  the  dimensionless parameters have been derived in the case of hydraulic machines. The same is also repeated in example.

The expression for the dimensionless specific speed is given in equation

5 Pressure Developed By The Impeller 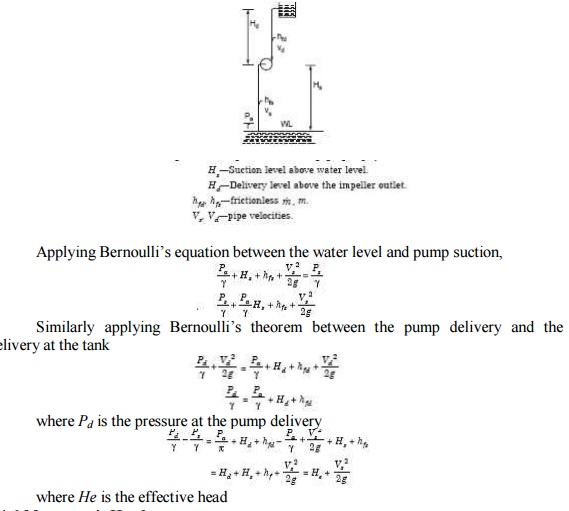 where He is the effective head

The official code defines the head on the pump as the difference in total energy heads at the suction and delivery flanges. This head is defined as manometric head.

The total energy at suction inlet (expressed as head of fluid)

where Zs is the height of suction gauge from datum. The total energy at the delivery of the pump

Z2 is the height of delivery gauge from datum. The difference in total energy is defined as Hm

The energy transfer is given by Euler Turbine equation applied to work absorbing machines,

The velocity diagrams at inlet and outlet of a backward curved vaned impeller is shown in figure The inlet whirl is generally zero. There are no guide vanes at inlet to impart whirl. So the inlet triangle is right angled. 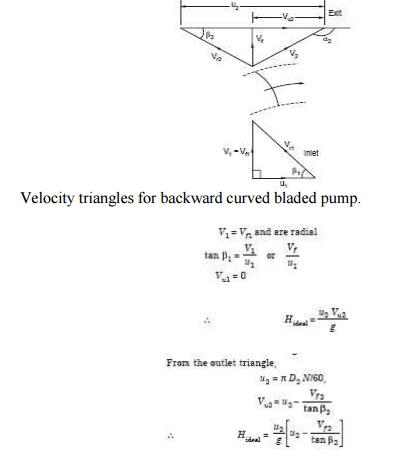 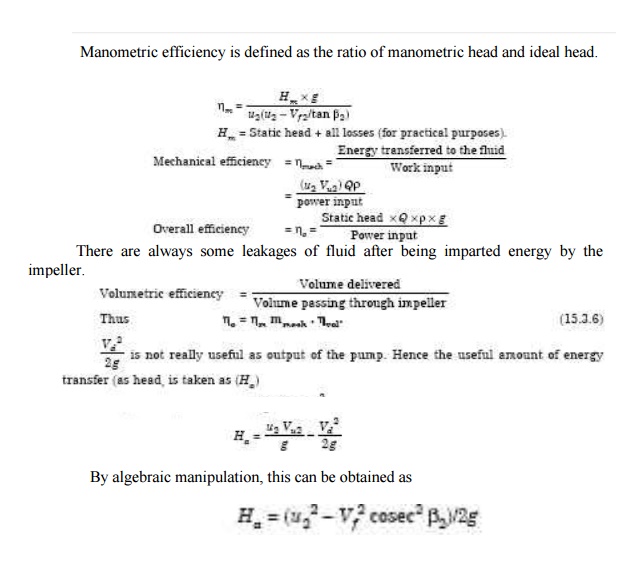 The average angle at which the fluid leaves the blade is less than the blades angle. The result is a reduction in the exit whirl velocity Vu2. This is illustrated in the following figure. The solid lines represent the velocity diagram without slip. The angle ?2 is the blade angle. The dotted lines represent the velocity diagram after slip. The angle ?2? < ?2. It may be seen that Vu2? < Vu2. The ratio Vu2?/Vu2 is known as slip factor. The result of the slip is that the energy transfer to the fluid is less than the theoretical value.

Mainly there are three specific losses which can be separately calculated. These are 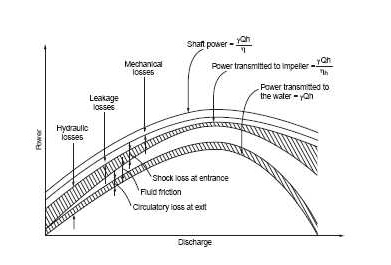 (i) Mechanical friction losses between the fixed and rotating parts in the bearings and gland and packing.

(ii) Disc friction loss between the impeller surfaces and the fluid. 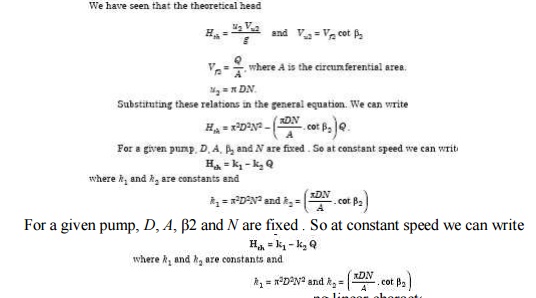 Hence at constant speed this leads to a drooping linear characteristics for backward curved blading. This is shown by curve 1 in Figure 15.4.1. The slip causes drop in the head, which can be written as ? Vu2 u2/g. As flow increases this loss also increases. 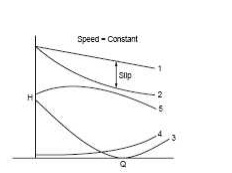 12 Characteristics of a centrifugal pump

The characteristic of a centrifugal pump at constant speed is shown in Figure. It may be noted that the power increases and decreases after the rated capacity. In this way the pump is self limiting in power and the choice of the motor is made easy. The distance between the brake power and water power curves gives the losses.

The pump characteristics at various speeds including efficiency contours in shown in Figure. Such a plot helps in the development of a pump, particularly in specifying the head and flow rates. 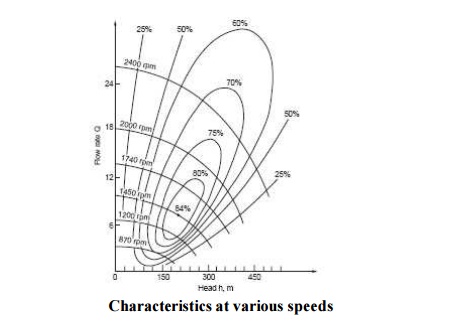