A pulse that satisfies the above condition at multiples of the bit period Tb will result in zero– ISI if the whole spectrum of that signal is received. The reason for which these zero–ISI pulses (also called Nyquist–criterion pulses) cause no ISI is that each of these pulses at the sampling periods is either equal to 1 at the center of pulse and zero the points other pulses are centered.

In fact, there are many pulses that satisfy these conditions. For example, any square pulse that occurs in the time period –Tb to Tb or any part of it (it must be zero at –Tb and Tb) will satisfy the above condition.

Also, any triangular waveform („Δ‟ function) with a width that is less than 2Tb will also satisfy the condition. A sinc function that has zeros at t = Tb, 2Tb, 3Tb, … will also satisfy this condition. The problem with the sinc function is that it extends over a very long period of time resulting in a lot of processing to generate it. The square pulse required a lot of bandwidth to be transmitted. The triangular pulse is restricted in time but has relatively large bandwidth.

There is a set of pulses known as raised–cosine pulses that satisfy the Nyquist criterion and require slightly larger bandwidth than what a sinc pulse (which requires the minimum bandwidth ever) requires.

The spectrum of these pulses is given by

Sketching the spectrum of these pulses we get 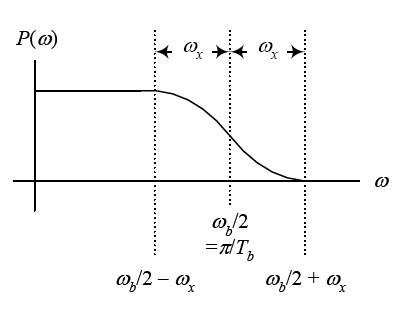 We can easily verify that when ωx = 0, the above spectrum becomes a rect function, and therefore the pulse p(t) becomes the usual sinc function. For ωx = b/2, the spectrum is similar to a sinc function but decays (drops to zero) much faster than the sinc (it extends over 2 or 3 bit periods on each side). The expense for having a pulse that is short in time is that it requires a larger bandwidth than the sinc function (twice as much for ωx =ω b/2). Sketch of the pulses and their spectrum for the two extreme cases of ω x =ωb/2 and ωx = 0 are shown below 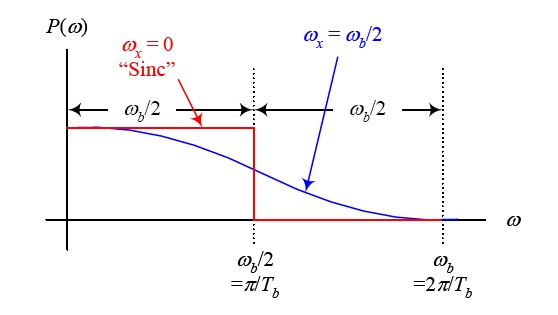