Nongenetic and Genetic Basis of Resistance

Resistance by bacteria against antibiotic may be classified as: a) Nongenetic basis b) Genetic basis

Resistance by bacteria against antibiotic may be classified as:

Nongenetic basis of resistance plays a less important role in the development of drug resistance:

a)        Certain bacteria under ordinary circumstances are usually killed by penicillins. But these bacteria, if lose their cell wall and become protoplast, become nonsusceptible to the action of cell wall–acting drug such as penicillins.

b)         In certain conditions, such as in the abscess cavity, bacteria can be walled off, which prevents drugs to penetrate effec-tively into bacteria. Surgical drainage of pus, however, makes these bacteria again susceptible to the action of antibiotics.

d)       Nonreplicating bacteria in their resting stage are less sensi-tive to the action of cell wall inhibitors such as penicillin and cephalosporins. This is particularly true for certain bacteria such as Mycobacterium tuberculosis that remains in resting stage in tissues for many years, during which it is insensitive to drugs. However, when these bacteria begin to multiply, they become susceptible to antibiotics.

Chromosome-mediated resistance occurs as a result of spon-taneous mutation. This is caused by mutation in the gene that codes for either the target of drug or the transport system in the membrane of the cell wall, which controls the entry of drugs into cells. The frequency of chromosomal mutation is much less than the plasmid-mediated resistance. It varies between 10 7 and 10 9.

Plasmid-mediated drug resistance in bacteria occurs by transfer of plasmid and genetic materials. It is mediated by resistance plasmid, otherwise known as R factor.

R factors: These are circular, double-stranded DNA moleculesthat carry the genes responsible for resistance against variety of antibiotics. These factors may carry one or even two or more resistant genes. The genes encode for a variety of enzymes that destroy the antibiotics by degrading antibiotics or modify membrane transport system. For example, the genes code for enzymes like -lactamases that destroy -lactam ring (which is responsible for the antibactericidal action of -lactam antibiot-ics, such as penicillins and cephalosporins). Table 9-3 lists dif-ferent mechanisms of plasmid-mediated resistance in bacteria. 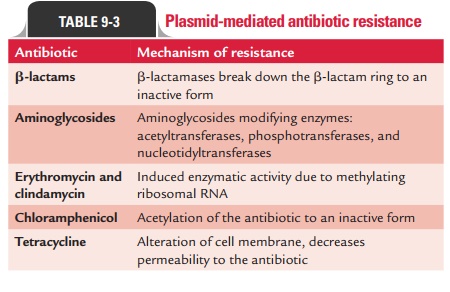 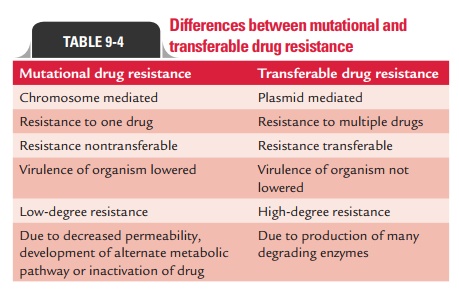