Mechanisms of Action of Antimicrobial Drugs

Mechanisms of Action of Antimicrobial Drugs

·           Bactericidal drugs are very much useful in (a) life- threatening situations, (b) endocarditis, (c) patients with low polymor-phonuclear count (below 500/ L), and (d) conditions in which bacteriostatic drugs do not cause a cure.

·           The bacteriostatic drugs depend on the host defense mecha-nisms, such as phagocytes to kill the bacteria. Hence, these drugs are not used when the patient has too few neutrophils.

Antibiotics act against bacteria by the following mechanisms:

b)       Inhibition of protein synthesis

Penicillins, cephalosporins, and vancomycin are the antibiot-ics that act against bacteria by interfering with their cell wall synthesis. Penicillins and cephalosporins are called -lactam antibiotics because they possess an intact -lactam ring essen-tial for antimicrobial activity.

The penicillins are called -lactam antibiotics because they have a common chemical nucleus (6-aminopenicillanic acid) that contains a -lactam ring. They are bactericidal antibiotics that act by inhibiting bacterial cell wall synthesis. They act primarily against Gram-positive organisms. Other penicillins, such as ampicillin, amoxicillin, carbenicillin, ticarcillin, piperacillin, etc., act against both Gram-positive and Gram-negative organisms. Penicillins kill bacteria by the following mechanisms:

·           The intact peptidoglycan in the cell wall of the bacteria has chains of N-acetyl muramic acid (NAM) and N-acetyl glucosamine (NAG) glycans cross-linked by peptide bridges. Penicillins and cephalosporins act by inhibiting penicillin-binding proteins (PBPs), also known as transpeptidases, that link the cross-bridges between NAMs, thereby, greatly weakening the cell wall meshwork. Streptococcus pneumoniae is an example of bacteria that show resistance against penicillins due to mutations that occur in the genes encoding PBPs.

Cephalosporins like penicillins are -lactam antibiotics. However, they differ from penicillins in having 7-amino-cephalosporanic acid instead of 6-aminopenicillanic acid in their structure. They exhibit bactericidal activity similar to that of penicillin. They are effective against a wide variety of bacterial pathogens.

The important cephalosporins are listed in Table 9-1.

Carbapenems (such as imipenem) and monobactams (such as aztreonam) are other examples of –lactam antibiotics, but these are structurally different from penicillins and cephalosporins.

Vancomycin is a glycopeptide, but its mode of action is very similar to that of -lactam antibiotics, such as penicillins and cephalosporins. It kills bacteria by inhibiting their cell wall syn-thesis. Vancomycin is a bactericidal antibiotic and is used:

·           Most widely against Clostridium spp. and Staphylococcus spp. infections;

·           Orally for treatment of antibiotics-associated colitis; and

Teicoplanin is a glycopeptide antibiotic extracted from Actinoplanes teichomyceticus, with a similar spectrum of activityto vancomycin. Its mechanism of action is to inhibit bacterial cell wall synthesis. Teicoplanin is used in:

·           Prophylaxis and treatment of serious infections caused by Gram-positive bacteria, including MRSA and Enterococcusfaecalis.

·           Treatment of pseudomembranous colitis and Clostridium dif-ficile-associated diarrhea, with comparable efficacy with van-comycin. Its strength is considered to be due to the length of the hydrocarbon chain.

Bacteria have 30S and 50S ribosomal units, whereas mam-malian cells have 80S ribosomes. The subunits of each type of ribosome, their chemical composition, and their functional specificities are sufficiently different, which explains why these antimicrobial drugs can inhibit protein synthesis in bacte-rial ribosomes without having a major effect on mammalian ribosomes. 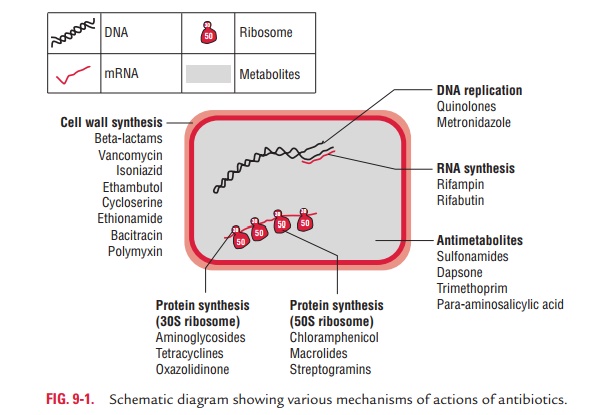 Aminoglycosides are a family of drugs that include streptomy-cin, gentamicin, tobramycin, amikacin, and neomycin, which are increasingly used in different clinical conditions. They kill bacteria by inhibiting protein synthesis. They do so by binding to the 30S subunit ribosome, which blocks the initiation com-plex, leading to no formation of peptide bonds or polysomes. They act mostly against Gram-negative bacteria.

Tetracyclines are a family of drugs that include dimethylchlo-rotetracyclines, doxycycline, and rolitetracycline. They are bacteriostatic drugs. They act by inhibiting protein synthesis of the bacteria by blocking the binding of aminoacyl t-RNA to the 30S ribosomal subunits. Therefore, they prevent introduction of new amino acids to the nascent peptide chain. The action is usually inhibitory and reversible upon withdrawal of the drug. They are variably effective in infections caused by both cocci and bacilli. They are also highly effective against rickettsial and chlamydial infections. Doxycycline, dimethylchlorotetra-cycline, and rolitetracycline are the examples of semisynthetic tetracyclines.

Macrolides (such as erythromycin, azithromycin, clarithromy-cin, and roxithromycin) have a macrolide ring to which sug-ars are attached. They are bacteriostatic antibiotics. They act by inhibiting protein synthesis of the bacteria by blocking the release of the t-RNA after it has transferred its amino acids to the growing polypeptide. Erythromycin is effective against Gram-positive cocci including MRSA, Neisseria spp., and Haemophilusinfluenzae.

Chloramphenicol is mainly a bacteriostatic agent, and growth of bacteria resumes when the drug is withdrawn. It acts by bind-ing to the 50S subunit of the ribosome and blocking peptidyl transferase, the enzyme that delivers the amino acid to the grow-ing polypeptide, resulting in the inhibition of bacterial protein synthesis. Chloramphenicol is used less frequently nowadays.

The mode of action of clindamycin is similar to that of eryth-romycin. It inhibits bacterial protein synthesis by blocking the release of t-RNA after it has transferred its amino acids to the growing polypeptide.

Sulfonamides, trimethoprim, quinolones, and rifampin are examples of drugs that act by inhibition of nucleic acid synthesis.

Sulfonamides and trimethoprim inhibit nucleic acid synthesis by inhibiting nucleotide synthesis. Sulfonamides are structural analogs of para-aminobenzoic acid (PABA). Due to structural similarity to PABA, sulfonamide competes with the latter during bacterial metabolism. Sulfonamides enter into the reaction in place of PABA and compete for the active center of the enzyme. As a result, nonfunctional analogs of folic acid are formed, preventing further growth of the bacterial cell. The inhibitory action of sulfonamides on bacterial growth can be counteracted by an excess of PABA in the environment (competitive inhibi-tion). Many other bacteria, however, synthesize folic acid, as mentioned above, and consequently are susceptible to action by sulfonamides. Sulfonamides are bacteriostatic drugs effective against a variety of Gram-negative and Gram-positive bacteria.

Trimethoprim (3,4,5-trimethoxybenzylpyrimidine) is a bac-teriostatic drug active against both Gram-positive and Gram-negative organisms. The compound inhibits the enzyme dihydrofolic acid reductase 50,000 times more efficiently in bacteria than in mammalian cells. This enzyme reduces dihydrofolic to tetrahydrofolic acid, leading to decreased syn-thesis of purines and ultimately of DNA.

Sulfonamides and trimethoprim inhibit the synthesis of tet-rahydrofolic acid, the main donor of the methyl groups that are essential to synthesize adenine, guanine, and cytosine.

Quinolones are synthetic analogs of nalidixic acid. They are a fam-ily of drugs that include ciprofloxacin, ofloxacin, and levofloxacin. They are bactericidal and act by inhibiting bacterial DNA synthesis by blocking DNA gyrase. DNA gyrase is the enzyme that unwinds DNA strands, so they can be replicated. Quinolones are effective against both Gram-positive and Gram-negative organisms.

Rifampin inhibits bacterial growth by binding strongly to the DNA-dependent RNA polymerase of bacteria. Thus, it inhibits bacterial RNA synthesis. The mechanism of rifampin action on viruses is different. It blocks a late stage in the assembly of poxviruses.

Polymyxins bind to the cell membrane and alter its structure, making it more permeable. The resulting water uptake leads to cell death. They are cationic, basic proteins that act like detergents (surfactants). Side-effects include neurotoxicity and acute renal tubular necrosis. It is commonly used in the topical first-aid preparation.

Cellular target sites of antimicrobial drugs are listed in Table 9-2. 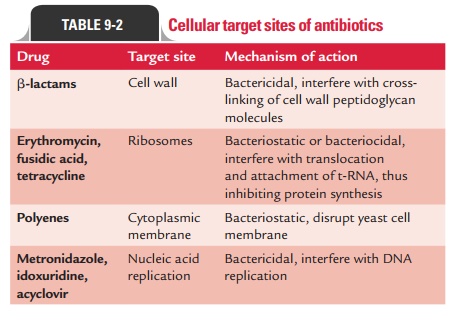