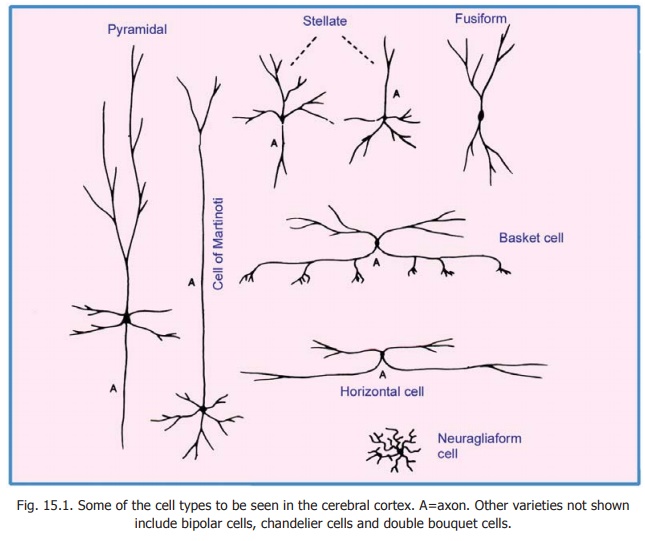 Cortical neurons vary in size, in the shape of their cell bodies, and in the lengths, branching patterns and orientation of their processes.

Cortical neurons vary in size, in the shape of their cell bodies, and in the lengths, branching patterns and orientation of their processes. Some of these are described below (Fig. 15.1).

1.   The most abundant type of cortical neurons are the pyramidal cells. (In contrast all other neurons in the cortex are referred to as non-pyramidal neurons). About two thirds of all cortical neurons are pyramidal. Their cell bodies are triangular, with the apex generally directed towards the surface of the cortex. A large dendrite arises from the apex. Other dendrites arise from basal angles. The axon arises from the base of the pyramid. The processes of pyramidal cells extend vertically through the entire thickness of cortex and establish numerous synapses. The axon of a pyramidal cell may terminate in one of the following ways.

a.              It may travel to other regions like the basal ganglia, the brainstem or the spinal cord. Fibres that leave the cortex commonly give off collaterals that terminate within the cortex.

2.   The stellate neurons are relatively small and multipolar. They form about one third of the total neuronal population of the cortex. Under low magnifications (and in preparations in which their processes are not demonstrated) these neurons look like granules. They have, therefore, been termed granularneurons by earlier workers. Stellate cells are of various types depending on their location, and on thepattern of ramification of their processes. Their axons are short and end within the cortex. Their processes extend chiefly in a vertical direction within the cortex, but in some cases they may be orientated horizontally. Some cells included under the term stellate may be fusiform rather than stellate, with one large process arising at either end. Some varieties of stellate cells are illustrated in Fig. 15.1. Depending on the density of synaptic spines on their dendrites, stellate neurons are classified as spiny and nonspiny. 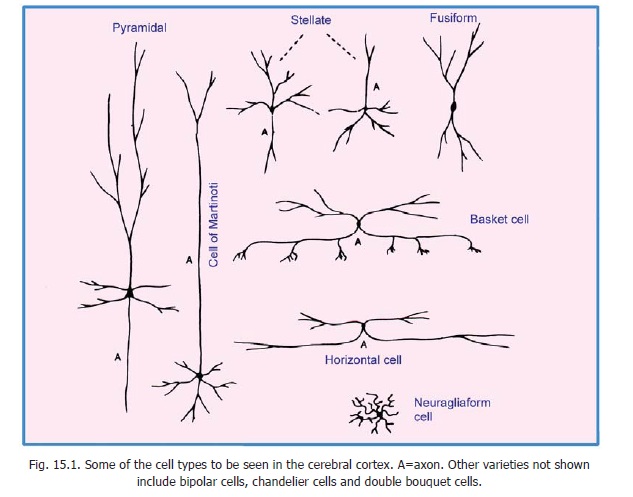 In addition to the stellate and pyramidal neurons the cortex contains numerous other cell types some of which are illustrated in Fig. 15.1.