On the basis of light microscopic preparations stained by methods in which the cell bodies are displayed (e.g., Nissl method) and those where myelinated fibres are stained (e.g., Weigert method) the cerebral cortex is described as having six layers or laminae.

On the basis of light microscopic preparations stained by methods in which the cell bodies are displayed (e.g., Nissl method) and those where myelinated fibres are stained (e.g., Weigert method) the cerebral cortex is described as having six layers or laminae (Fig. 15.2). From the superficial surface downwards these laminae are as follows. 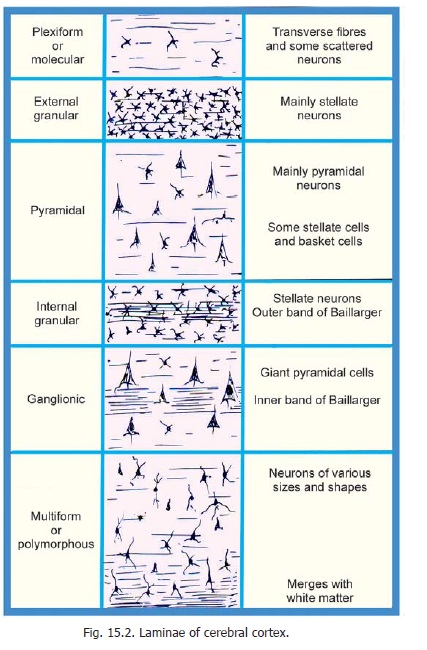 The plexiform layer is made up predominantly of fibres although a few cells are present. All the remaining layers contain both stellate and pyramidal neurons as well as other types of neurons. The external and internal granular layers are made up predominantly of stellate (granular) cells. The predominant neurons in the pyramidal layer and in the ganglionic layer are pyramidal. The largest pyramidal cells (giant pyramidal cells of Betz) are found in the ganglionic layer. The multiform layer contains cells of various sizes andshapes.

In addition to the cell bodies of neurons the cortex contains abundant nerve fibres. Many of these are vertically orientated. Some of these fibres represent afferents entering the cortex. In addition to the vertical fibres the cortex contains transversely running fibres that form prominent aggregations in certain situations. One such aggregation, present in the internal granular layer is called the external band of Baillarger.Another, present in the ganglionic layer is called the internal bandof Baillarger. The space betweenthe cell bodies of neurons is permeated by a dense plexus formed by their processes. This plexus is referred to as the neuropil. (Some workers use theterm neuropil for the entire mass of nervous tissue including grey matter as well as white matter).

The structure of the cerebral cortex shows considerable variation from region to region, both in terms of thickness and in the prominence of the various laminae described above. As already mentioned finer variations form the basis of the subdivisions into Brodmann’s areas. Other workers divide the cortex into five broad varieties. These are as follows.

(1) In the agranular cortex the external and internal granular laminae are inconspicuous. This type of cortex is seen most typically therefore, believed to be typical of ‘motor’ areas. It is also seen in areas 6, 8, 44 and in parts of the limbic system.

(2) In the granular cortex the granular layers are highly developed while the pyramidal and ganglionic layers are poorly developed or absent. This type of cortex is seen most typically in ‘sensory’ areas including the postcentral gyrus, the visual cortex, and the acoustic areas . In the visual area the external band of Baillarger is prominent and forms a white line that can be seen with the naked eye when the region is freshly cut across. This stria of Gennari gives the name striatecortex to the visual cortex.

Between the two extremes represented by the agranular and granular varieties of cortex, three intermediate types are described as follows.

The frontal type is nearest to the agranular cortex, the pyramidal cells being prominent; while the polar type is nearest to the granular cortex. The terms frontal and parietal are unfortunate as these types are not confined to the regions suggested by their names. The approximate distribution of the five types of cortex described above, on the superolateral surface of the cerebral hemisphere, is shown in Fig. 15.3

Before terminating this section on the structure of the cerebral cortex it is necessary to emphasise the following facts, revealed by both anatomical and physiological studies.

a)              From the point of view of function one has to think in terms of ‘vertical columns’ of cortex rather than in terms of laminar structure.

b)             The similarities between different regions of the cortex, in terms of the total neuronal population per unit volume of cortex, and in terms of the ratios of pyramidal and stellate (granular) neurons, are more striking than differences in laminar structure. Counts of neurons in delimited zones of cortex have shown that the total number of neurons is remarkably constant over different areas. However, the striate area (area 17) is an important exception, the neurons being much more numerous (about two and a half times) here as compared to other parts of cortex. In a given area of cortex about two thirds of neurons are pyramidal, and one third non-pyramidal.