Networks for embedded computing span a broad range of requirements; many of those requirements are very different from those for general-purpose networks.

The I2C bus is used in microcontroller-based systems.

The Controller Area Network (CAN) bus was developed for automotive electronics. It provides megabit rates and can handle large numbers of devices.

Ethernet and variations of standard Ethernet are used for a variety of control applications.

The I2C bus [Phi92] is a well-known bus commonly used to link microcontrollers into systems. It has even been used for the command interface in an MPEG-2 video chip [van97]; while a separate bus was used for high-speed video data, setup information was transmitted to the on-chip controller through an I2C bus interface.

I2C is designed to be low cost, easy to implement, and of moderate speed (up to 100 KB/s for the standard bus and up to 400 KB/s for the extended bus). As a result, it uses only two lines:

the serial data line (SDL) for data and the serial clock line (SCL), which indicates when valid data are on the data line. Figure 4.6 shows the structure of a typical I2C bus system.

Every node in the network is connected to both SCL and SDL. Some nodes may be able to act as bus masters and the bus may have more than one master. Other nodes may act as slaves that only respond to requests from masters. 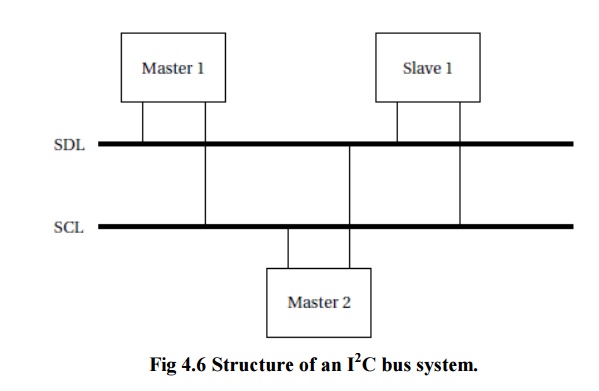 The basic electrical interface to the bus is shown in Figure 4.7.The bus does not define particular voltages to be used for high or low so that either bipolar or MOS circuits can be connected to the bus.

Both bus signals use open collector/open drain circuits.1 A pull-up resistor keeps the default state of the signal high, and transistors are used in each bus device to pull down the signal when a 0 is to be transmitted. 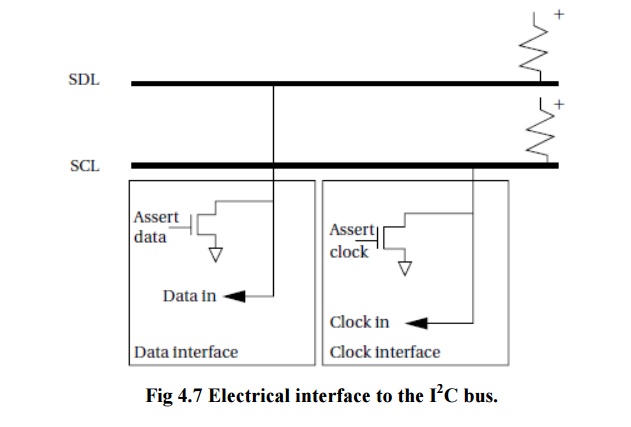 The Open collector/open drain signaling allows several devices to simultaneously write the bus without causing electrical damage. The open collector/open drain circuitry allows a slave device to stretch a clock signal during a read from a slave. The master is responsible for generating the SCL clock, but the slave can stretch the low period of the clock (but not the high period) if necessary.

The I2C interface on a microcontroller can be implemented with varying percentages of the functionality in software and hardware [Phi89]. As illustrated in Figure 4.8, a typical system has a 1-bit hardware interface with routines for byte level functions. 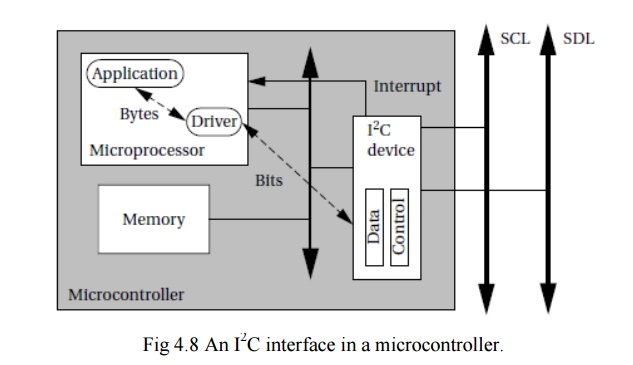 The I2C device takes care of generating the clock and data. The application code calls routines to send an address, send a data byte, and so on, which then generates the SCL and SDL, acknowledges, and so forth.

One of the microcontroller’s timers is typically used to control the length of bits on the bus. Interrupts may be used to recognize bits. However, when used in master mode, polled I/O may be acceptable if no other pending tasks can be performed, since masters initiate their own transfers.

Ethernet is very widely used as a local area network for general-purpose computing. Because of its ubiquity and the low cost of Ethernet interfaces, it has seen significant use as a network for embedded computing.

Ethernet is particularly useful when PCs are used as platforms, making it possible to use standard components, and when the network does not have to meet rigorous real-time requirements.

The physical organization of an Ethernet is very simple, as shown in Figure 8.14. The network is a bus with a single signal path; the Ethernet standard allows for several different implementations such as twisted pair and coaxial cable.

Unlike the I2C bus,nodes on the Ethernet are not synchronized they can send their bits at any time. I2C relies on the fact that a collision can be detected and quashed within a single bit time thanks to synchronization.

But since Ethernet nodes are not synchronized, if two nodes decide to transmit at the same time, the message will be ruined. The Ethernet arbitration scheme is known as Carrier Sense Multiple Access with Collision Detection (CSMA/CD).

The H1 standard uses a twisted-pair physical layer that runs at 31.25 MB/s. It is designed for device integration and process control. The High Speed Ethernet standard is used for backbone networks in industrial plants. It is based on the 100 MB/s Ethernet standard. It can integrate devices and subsystems.