Designing a distributed embedded system around a network involves some of the same design tasks we faced in accelerated systems.

Designing a distributed embedded system around a network involves some of the same design tasks we faced in accelerated systems. We must schedule computations in time and allocate them to PEs. Scheduling and allocation of communication are important additional design tasks required for many distributed networks.

Many embedded networks are designed for low cost and therefore do not provide excessively high communication speed. If we are not careful, the network can become the bottleneck in system design. In this section we concentrate on design tasks unique to network-based distributed embedded systems.

We know how to analyze the execution time of programs and systems of processes on single CPUs, but to analyze the performance of networks we must know how to determine the delay incurred by transmitting messages. Let us assume for the moment that messages are sent reliably we do not have to retransmit a message.

where tx is the transmitter-side overhead, tn is the network transmission time, and tr is the receiver-side overhead. In I2C, tx and tr are negligible relative to tn

If messages can interfere with each other in the network, analyzing communication delay becomes difficult. In general, because we must wait for the network to become available and then transmit the message, we can write the message delay as

where td is the network availability delay incurred waiting for the network to become available. The main problem, therefore, is calculating td. That value depends on the type of arbitration used in the network.

Of course,a round-robin arbitrated network puts all communications at the same priority. This does not eliminate the priority inversion problem because processes still have priorities. Thus far we have assumed a single-hop network: A message is received at its intended destination directly from the source,without going through any other network node.

The hardware platform has two separate networks ( perhaps so that communications between subsets of the PEs do not interfere),but there is no direct path from M1 to M5.The message is therefore routed through M3, which reads it from one network and sends it on to the other one. 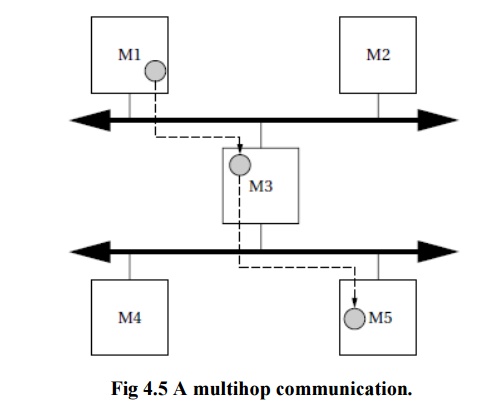 Analyzing delays through multihop systems is very difficult. For example,the time that the message is held at M3 depends on both the computational load of M3 and the other messages that it must handle.

For example, if we move a computation to a slower PE, its results will be available later, which may mean rescheduling both the process that uses the value and the communication that sends the value to its destination.