The Internet Protocol (IP) [Los97, Sta97A] is the fundamental protocol on the Internet. It provides connectionless, packet-based communication. Industrial automation has long been a good application area for Internet-based embedded systems.

Information appliances that use the Internet are rapidly becoming another use of IP in embedded computing. Internet protocol is not defined over a particular physical implementation it is an internetworking standard. Internet packets are assumed to be carried by some other network, such as an Ethernet. In general, an Internet packet will travel over several different networks from source to destination.

The IP allows data to flow seamlessly through these networks from one end user to another. The relationship between IP and individual networks is illustrated in Figure 4.6. IP works at the network layer. 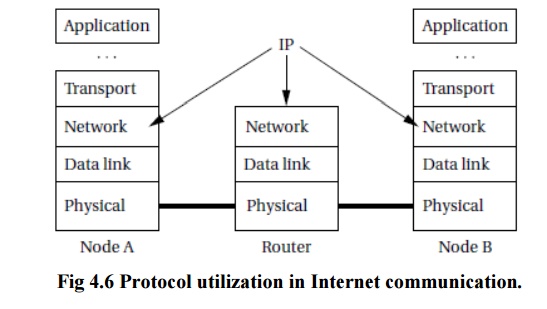 When node A wants to send data to node B, the application’s data pass through several layers of the protocol stack to send to the IP. IP creates packets for routing to the destination, which are then sent to the data link and physical layers. A node that transmits data among different types of networks is known as a router.

The router’s functionality must go up to the IP layer, but since it is not running applications, it does not need to go to higher levels of the OSI model.

In general, a packet may go through several routers to get to its destination. At the destination, the IP layer provides data to the transport layer and ultimately the receiving application.

As the data pass through several layers of the protocol stack, the IP packet data are encapsulated in packet formats appropriate to each layer. 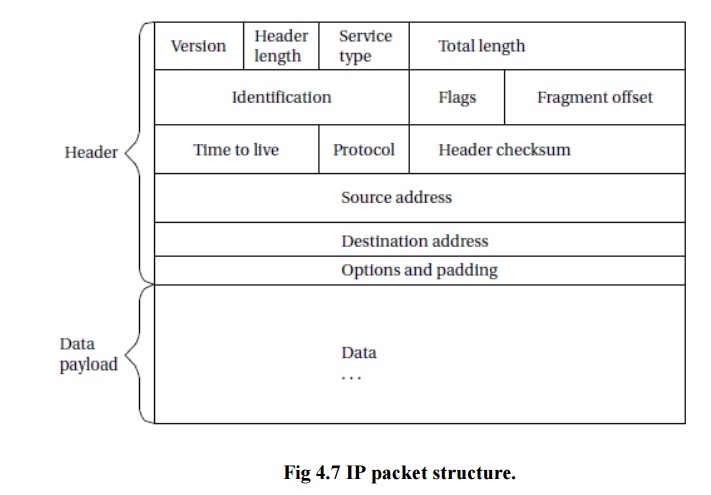 An Internet address is a number (32 bits in early versions of IP, 128 bits in IPv6). The IP address is typically written in the form xxx.xx.xx.xx. The names by which users and applications typically refer to Internet nodes, such as foo.baz.com, are translated into IP addresses via calls to a Domain Name Server, one of the higher-level services built on top of IP.

The fact that IP works at the network layer tells us that it does not guarantee that a packet is delivered to its destination. Furthermore, packets that do arrive may come out of order. This is referred to as best-effort routing.

Since routes for data may change quickly with subsequent packets being routed along very different paths with different delays, real-time performance of IP can be hard to predict.

The Transmission Control Protocol (TCP) is one such example. It provides a connection oriented service that ensures that data arrive in the appropriate order, and it uses an acknowledgment protocol to ensure that packets arrive. Because many higher-level services are built on top of TCP, the basic protocol is often referred to as TCP/IP.

A separate transport protocol, User Datagram Protocol, is used as the basis for the network management services provided by the Simple Network Management Protocol. 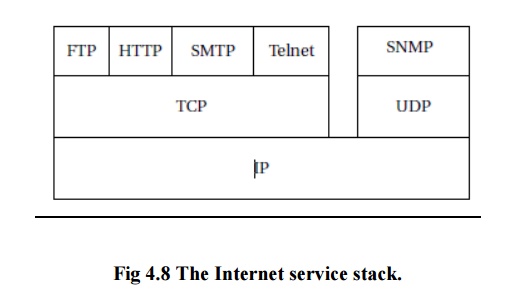 The Internet provides a standard way for an embedded system to act in concert with other devices and with users, such as:

One of the earliest Internet-enabled embedded systems was the laser printer. High-end laser printers often use IP to receive print jobs from host machines.

A home control system allows the homeowner to remotely monitor and control home cameras, lights, and so on.

Although there are higher-level services that provide more time-sensitive delivery mechanisms for the Internet, the basic incarnation of the Internet is not well suited to hard real-time operations. However, IP is a very good way to let the embedded system talk to other systems.

IP provides a way for both special-purpose and standard programs (such as Web browsers) to talk to the embedded system. This non–real-time interaction can be used to monitor the system, set its configuration, and interact with it.