The complete architectural design of the accelerated system depends on the application being implemented.

The complete architectural design of the accelerated system depends on the application being implemented. However, it is helpful to think of an architectural framework into which our accelerator fits. Because the same basic techniques for connecting the CPU and accelerator can be applied to many different problems, understanding the framework helps us quickly identify what is unique about our application.

The accelerator will almost certainly use registers for basic control. Status registers like those of

I/O devices are a good way for the CPU to test the accelerator’s state and to perform basic operations such as starting, stopping, and resetting the accelerator.

Large-volume data transfers may be performed by special-purpose read/write logic. Figure 4.2 illustrates an accelerator with read/write units that can supply higher volumes of data without CPU intervention. A register file in the accelerator acts as a buffer between main memory and the accelerator core.

The read unit can read ahead of the accelerator’s requirements and load the registers with the next required data; similarly, the write unit can send recently completed values to main memory while the core works with other values.

In order to avoid tying up the CPU, the data transfers can be performed in DMA mode, which means that the accelerator must have the required logic to become a bus master and perform DMA operations. 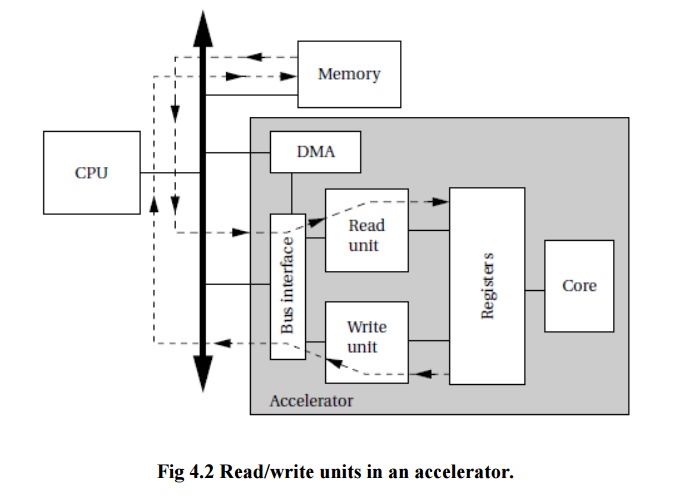 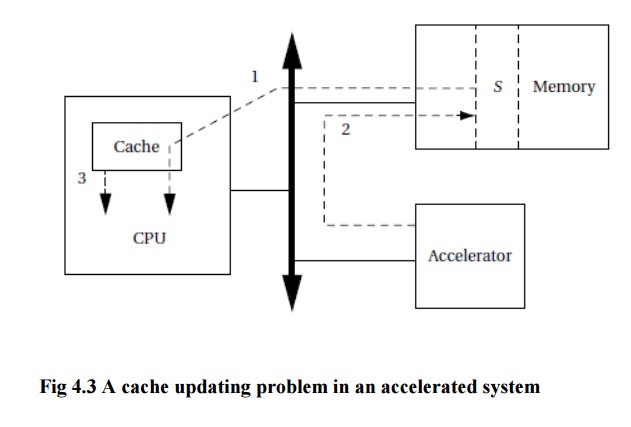 The CPU cache can cause problems for accelerators. Consider the following sequence of operations as illustrated in Figure 4.3:

If the CPU has cached location S,the program will not see the value of S written by the accelerator. It will instead get the old value of S stored in the cache.To avoid this problem, the CPU’s cache must be updated to reflect the fact that this cache entry is invalid. Your CPU may provide cache invalidation instructions; you can also remove the location from the cache by reading another location that is mapped to the same cache line

Some CPUs are designed to support multiprocessing. The bus interface of such machines provides mechanisms for other processors to tell the CPU of required cache changes. This mechanism can be used by the accelerator to update the cache.

If the CPU and accelerator operate concurrently and communicate via shared memory, it is possible that similar problems will occur in main memory, not just in the cache. If one PE reads a value and then updates it, the other PE may change the value, causing the first PE’s update to be invalid. In some cases, it may be possible to use a very simple synchronization scheme for communication.

The CPU writes data into a memory buffer, starts the accelerator, waits for the accelerator to finish, and then reads the shared memory area. This amounts to using the accelerator’s status registers as a simple semaphore system.