This section develops the necessary and sufficient conditions for an n-variable function f(X) to have extrema.

This section develops the necessary and sufficient conditions for an n-variable function f(X) to have extrema. It is assumed that the first and second partial derivatives of f(X) are continuous for all X.

We show by contradiction that Ñf(X o) must vanish at a minimum point Xo. For suppose it does not, then for a specific j the following condition will hold.

This result contradicts the assumption that X o is a minimum point. Thus, Ñf(X o) must equal zero. A similar proof can be established for the maximization case.

Because the necessary condition is also satisfied for inflection and saddle points, it is more appropriate to refer to the points obtained from the solution of Ñf(Xo) = 0 as stationary points. The next theorem establishes the sufficiency conditions for X o to be an extreme point.

Theorem 18.1-2. A sufficient condition for a stationary point X o to be an extremum is that the Hessian matrix H evaluated at X o satisfy the following conditions: 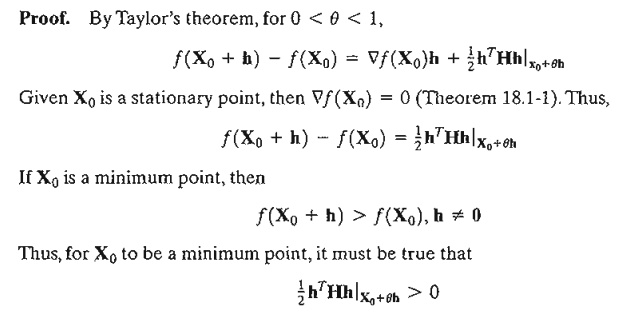 Given that the second partial derivative is continuous, the expression  ½  hTHh must have the same sign at both Xo and Xo + qh. Because hTHhl Xo defines a quadratic form (see Section 0.3 on the CD), this expression (and hence hTXh|Xo+qh) is positive if and only if, H|x0 is positive-definite. This means that a sufficient condition for the stationary point X o to be a minimum is that the Hessian matrix, H, evaluated at the same point is positive-definite. A similar proof for the maximization case shows that the corresponding Hessian matrix must be negative-definite. 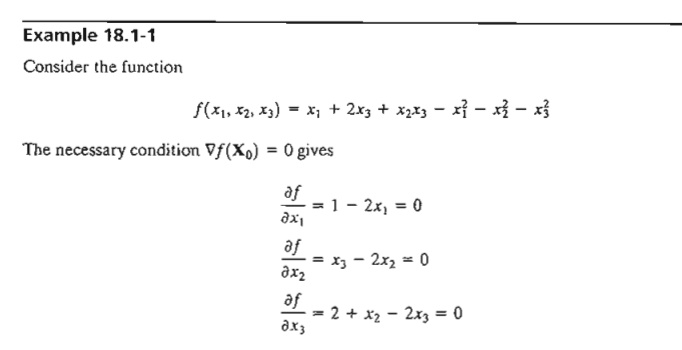 In general, if H|x0 is indefinite, Xo must be a saddle point. For nonconclusive cases, Xo mayor may not be an extremum and the sufficiency condition becomes rather involved, because higher-order terms in Taylor's expansion must be considered.

The sufficiency condition established by Theorem 18.1-2 applies to single-variable functions as follows. Given that yo is a stationary point, then

If f” (y0) = 0, higher-order derivatives must be investigated as the following theorem requires.

3. Verify that the function

*4. Solve the following simultaneous equations by converting the system to a nonlinear objective function with no constraints.