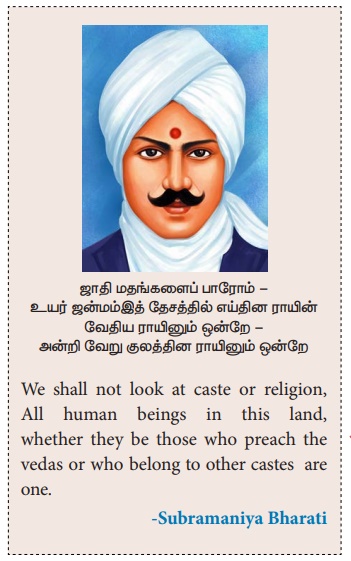 C. Subramaniya Bharathiyar was a poet, freedom fighter and social reformer from Tamil Nadu. He was known as Mahakavi Bharathiyar and the laudatory epithet Mahakavi means a great poet. He is considered as one of India’s greatest poets. His songs on nationalism and freedom of India helped to rally the masses to support the Indian Independence Movement in Tamil Nadu.

Bharathi: A poet and a Nationalist

Bharathi is considered as a national poet due to his number of poems of the patriotic flavour through which he exhorted the people to join the independence struggle and work vigorously for the liberation of the country. Instead of merely being proud of his country he also outlined his vision for a free India. He published the sensational “Sudesa Geethangal” in 1908.

Bharathi as a Journalist

Many years of Bharathi’s life were spent in the field of journalism, Bharathi, as a young man began his career as a journalist and as a sub-editor in “Swadesamitran” in November 1904.“India” saw the light of the day in May, 1906. It declared as its motto the three slogans of the French Revolution, Liberty, Equality and Fraternity. It blazed a new trail in Tamil Journalism. In order to proclaim its revolutionary ardour, Bharathi had the weekly printed in red paper. “India” was the first paper in Tamil Nadu to publish political cartoons. He also edited and published 'Vijaya', a Tamil daily “Bala Bharatha” an English monthly, and 'Suryothayam' a local weekly of Pondicherry.

It is not surprising therefore that soon a warrant was waiting at the door of the “India” office for the arrest of the editor of the magazine. It was because of this worsening situation in 1908 that Bharathi decided to go away to Pondicherry, a French territory at that time, and continue to publish the “India” magazine. Bharathi resided in Pondicherry for sometime to escape the wrath of the British imperialists. 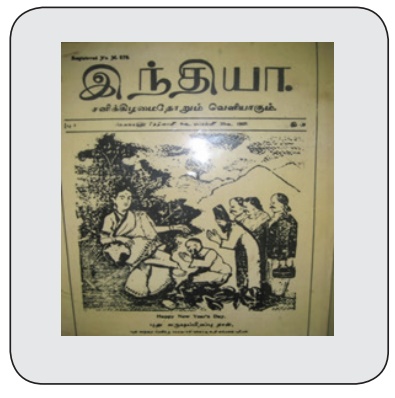 During his exile, Bharathi had the opportunity to mingle with many leaders of the militant wing of the independence movement such as Aurobindo, Lajpat Rai and V.V.Subramaniam who had also sought asylum in the French ruled Pondicherry. The most profitable years of Bharathi’s life were the ten years he spent in Pondicherry. From Pondicherry, he guided the Tamil youth of Madras to tread in the path of nationalism. This increased the anger of the British towards Bharathi’s writings as they felt that it was his writings that induce and influence the patriotic spirit of the Tamil youth. Bharathi met Mahatma Gandhi in 1919 in Rajaji’s home at Madras. Bharathi entered British India near Cuddalore in November 1918 and was promptly arrested. Even in prison, he spent his time in writing poems on freedom, nationalism and country’s welfare.

In his early days of youth he had good relations with Nationalist Tamil Leaders like V.O.Chidambaram, Subramanya Siva, Mandayam Thirumalachariar and Srinivasachari. Along with these leaders he used to discuss the problems facing the country due to British rule. Bharathi used to attend the Annual sessions of Indian National Congress and discuss national issues with extremist Indian National Leaders like Bipin Chandra Pal, B.G. Tilak and V.V.Subramaniam. His participation and activities in Benaras Session (1905) and Surat Session (1907) of the Indian National Congress impressed many national leaders about his patriotic fervour. Bharathi had maintained good relations with some of the national leaders and shared his thoughts and views on the nation and offered his suggestions to strengthen the nationalist movement. Undoubtedly, his wise suggestions and steadfast support to the cause of nationalism rejuvenated many national leaders. Thus Bharathi played a pivotal role in the freedom of India.

Bharathiyar as a social reformer

Bharathi was also against caste system. He declared that there were only two castes-men and women and nothing more than that. Above all, he himself had removed his sacred thread. He had also adorned many scheduled caste people with sacred thread. He used to take tea sold in shops run by Muslims. He along with his family members attended church on all festival occasions. He advocated temple entry of Dalits. For all his reforms, he had to face opposition from his neighbours. But Bharathi was very clear that unless Indians unite as children of Mother India, they could not achieve freedom. He believed in women’s rights, gender equality and women emancipation. He opposed child marriage, dowry system and supported widow remarriage.

Bharathi as a poet, journalist, freedom fighter and social reformer had made a great impact not only on the Tamil society but also on the entire human society. He followed what all he preached and it is here that his greatness is manifested. His prophecy during the colonial period about the independence of India came true after two and half decades after his demise. His vision about a glorious India has been taking a shape in the post-Independence era. Bharathi did not live for himself but for the people and nation. That is why he is respectfully called as Bharathiyar. Even today, after many decades, Subramaniya Bharathiyar stands as an undying symbol of Indian freedom and vibrant Tamil nationalism.