In Arathupal of Thirukkural, Valluvar was a great enunciator of morals; In Inbathupal, he has become a poet and in Porutpal, he is known to be a political philosopher.

In Arathupal of Thirukkural, Valluvar was a great enunciator of morals; In Inbathupal, he has become a poet and in Porutpal, he is known to be a political philosopher. The political philosophy of Thiruvalluvar is applicable across times even today. 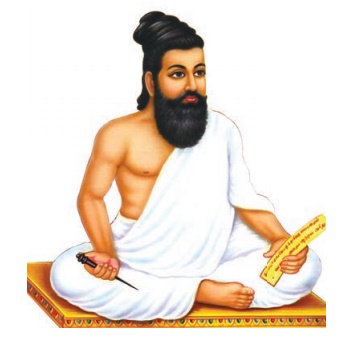 “An army, people, wealth, a minister, friends, fort; six things Who owns them all, a lion lives amid the kings” (Kural: 381)

Thus, in porutpal, at the first verse itself valluvar differentiated the six categories essential for a state. Thus, different parts of government are ministry, army, wealth, people, friendship and citizens, which determines the rule of a king. Moreover, these components are categorized for king in a separate way, thus contributing a lot of ideas regarding administration of a state and assets for a king.

Nature of a king – 25 Chapters

In porutpal, Valluvar mentioned about nature of a king in detailed manner in 25 chapters starting from Qualities of ruler (Iraimatchi – chapter 39) to idukkan azhaiyaamai (Unfazed in the face of trouble – chapter 63) in 25 chapters, in the name of “Arasar”, “Vender”, “Nilan Aandavar” “Mannavar” he has indicated 46 times about the king.

Valluvar lived in the period of monarchy. However, his ideas and ideals are also applicable for the present leaders of democracy. He also indicated the nature of state and government in the king’s rule. The words of Valluvar regarding government and state is applicable and suitable to all over the period as well as every organization in the world.

To put it in simple words, Valluvar’s political system is based on welfare state. For instance, in Iraimatchi (Qualities of a ruler), he says

Who guards the realm and justice strict maintains, That king as god over subject people reigns. (Kural: 388)

If a king delivered justice by doing the duties honestly, he may be regarded as a God. Ideal path and welfare – arrived kings can be respected and kept on par with divine. This kind of view is not only applicable to monarchical period but it also applicable to present democratic period.

The characteristics of a state is to maintain ethics, the eradication of wrong doing activity, mandating impartiality of justice and protection of honour.

King’s path is the peoples’ path, king should act as a guide for his subjects, if he does harm or evil activities, it may influence all. It is because of his position as a leader, his discipline and private life will spread to all in the kingdom. Moral and ethical life is quite essential for the ruling kings. Indicating “Respect” in a broad manner relating it with nation, Valluvar gave priority for great honour which may be equated with the courage. He stressed that king must be loyal to the nation, it is the honour of nation.

Ideal State and Welfare of people

All earth looks up to heaven where raindrops fall; All subjects look to king that ruleth all. (Kural: 542)

In this couplet Valluvar indicates “Kol” as ideal rule which not only applies for monarchy but also for democracy.

Whose heart embraces subjects all, lord over mighty land Who rules, the world his feet embracing stands. (Kural: 544)

This means that for a King, who protects his citizens with love and affection, his feet will be embraced by his subjects with love. This is an everlasting phrase propounded by Valluvar related to good governance.

In the chapter “Kodungonmai”, (Cruel Scepter) Valluvar explained it in negative words. The suppressive and exploitative rule of evil king may kindle unknown and indefinite agonies among the people. Those tears are most powerful and may annihilate the entire kingdom.

His people’s tears of sorrow past endurance, are not they Sharp instrument to wear the marches wealth away. (Kural: 555)

Sad tears of suffering citizens may dethrone and destroy the entire government, says Thiruvalluvar. Tears were equated with army, thus Valluvar’s visualization stands unique among others.

Autocrats and Dictators like Hitler, Mussolini and Czar were the negative players for whom, Thirukkural served as a funeral sound.

A king should be an able handed administrator in increasing the income of government. Further he should be an expert in handling the budget.

A king is be who treasure gains, stores up, defends,

At first point, a king should search for the different sources of income. For this, he calls it as “Iyatral”. Then, the second point is that, all such resources should be put together, which is called as “Ettal”. Third, the resources thus collected must be protected with all precautionary measures which is called as “Kaathal”

Fourth one, is most important (i.e) allotting the resources to various sectors for the welfare of the people, this he called it as “Vagutthal”. Thus iyatral, eetall, kaathal and vaguthal are the four ways of utilizing the income to be expertise by the king of nation. It is a primary duty of the king.

These innovative and practical ideas were accepted by political and as well as economic exponents as the basic idea of socialistic society.

The Educational qualities that are indicated by Valluvar for a king may also apply to the citizens. Thus, he used the words “Idukkan Ariyamai”, “Kalvi” for “Vazhum Uyirku”, “Maandharkku” which is for all the people.

The political ideas advocated by Valluvar in porutpal highly circumvent around morals and noble principles.

“People’s-welfare” is the basic foundation of his contribution.

To put it in a different way, Valluvar’s contribution to politics is applicable to the present democratic governance for the welfare of all the people.

The qualities that were indicated by Valluvar for a king may also apply to the citizens. Thus, he used the words “Idukkan Ariyamai”, “Kalvi” for “Vazhum Uyirku”, “Maandharkku” which is for all the people.

The political ideas advocated by Valluvar in porutpal highly circumvent around morals and noble principles. “People’s-welfare” is the basic foundation of his contribution.

To put it in a different way Valluvar’s contribution to politics is majorly applicable to the present democratic governance for the great welfare of all the people.