Listen to the teacher and read this section.

Listen to the teacher and read this section.

When I returned home from the outset of my second voyage to England, my brother Jyotirindra and sister-in-law were living in a river-side villa at Chandernagore, and there I went to stay with them.

The Ganges again! Again those ineffable days and nights, languid with joy, sad with longing, attuned to the plaintive babbling of the river along the cool shade of its wooded banks. This Bengal sky-full of light, this south breeze, this flow of the river, this right royal laziness, this broad leisure stretching from horizon to horizon and from green earth to blue sky, all these were to me as food and drink to the hungry and thirsty. Here it felt indeed like home, and in these I recognised the ministrations of a Mother.

That was not so very long ago, and yet time has wrought many changes. Our little riverside nests, clustering under their surrounding greenery, have been replaced by mills which now, dragon-like, everywhere rear their hissing heads, belching forth black smoke. In the midday glare of  modern life even our hours of mental siesta have been narrowed down to the lowest limit, and hydra-headed unrest has invaded every department of life. Maybe, this is for the better, but I, for one, cannot account it wholly to the good.

These lovely days of mine at the riverside passed by like so many dedicated lotus blossoms floating down the sacred stream. Some rainy afternoons I spent in a veritable frenzy, singing away old Vaishnava songs to my own tunes, accompanying myself on a harmonium. On other afternoons, we would drift along in a boat, my brother Jyotirindra accompanying my singing with his violin. And as, beginning with the Puravi,[50] we went on varying the mode of our music with the declining day, we saw, on reaching the Behaga,[50] the western sky close the doors of its factory of golden toys, and the moon on the east rise over the fringe of trees. 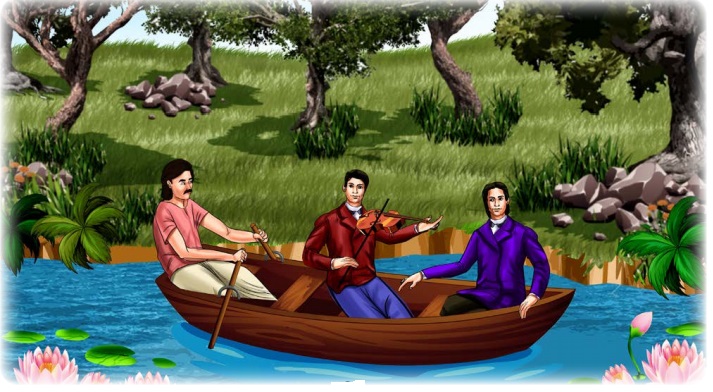 Then we would row back to the landing steps of the villa and seat ourselves on a quilt spread on the terrace facing the river. By then a silvery peace rested on both land and water, hardly any boats were about, the fringe of trees on the bank was reduced to a deep shadow, and the moonlight glimmered over the smooth flowing stream.

The villa we were living in was known as ‘Moran’s Garden’. A flight of stone-flagged steps led up from the water to a long, broad verandah which formed part of the house. The rooms were not regularly arranged, nor all on the same level, and some had to be reached by short flights of stairs. The big sitting room overlooking the landing steps had stained glass windows with coloured pictures.

One of the pictures was of a swing hanging from a branch half-hidden in dense foliage, and in the checkered light and shade of this bower, two persons were swinging; and there was another of a broad flight of steps leading into some castle-like palace, up and down which men and women in festive garb were going and coming. When the light fell on the windows, these pictures shone wonderfully, seeming to fill the river-side atmosphere with holiday music. Some far-away long-forgotten revelry seemed to be expressing itself in silent words of light; the love thrills of the swinging couple making alive with their eternal story the woodlands of the river bank.

The topmost room of the house was in a round tower with windows opening to every side. This I used as my room for writing poetry. Nothing could be seen from thence save the tops of the surrounding trees, and the open sky. I was then busy with the Evening Songs and of this room I wrote:

There, where in the breast of limitless space clouds are laid to sleep, I have built my house for thee, O Poesy! 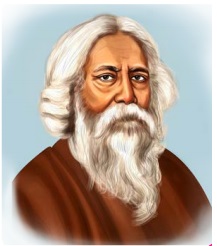 Rabindranath Tagore (1861-1941) , Nobel prize-winning Bengali poet, author, philosopher, artist, and educator wrote “Gitanjali” (1912) . "My Reminiscences" was written and published in his fiftieth year, shortly before he started on a trip to Europe and America for his failing health in 1912. It was in the course of this trip that he wrote for the first time in the English language for publication.