Conventional radiographs are the most frequently obtained imaging studies. They are chiefly useful for evaluation of the bones, but useful information about the adjacent soft tissues may also be obtained. Gas in the soft tissues may be a clue to an open wound, ulcer, or infection with a gas-producing or-ganism. Calcifications in the soft tissues can indicate a tumor, myositis ossificans, or systemic disorders such as scleroderma or hyperparathyroidism. 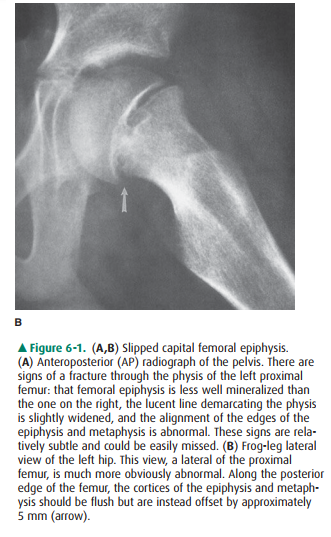 To get the most information possible from conventional radiographs, you should carefully choose the study to be or-dered. At most hospitals and clinics, standardized sets of views have been developed that are routinely obtained to-gether for evaluation of specific body areas in certain clinical settings. It is useful to know what will routinely be obtained when a certain set of films is ordered. Radiographs of the ankle, for example, usually include a straight frontal view of the ankle, a frontal view obtained with approximately 15 degrees internal rotation of the ankle (the mortise view), and a lateral view. There will be some variation among institutions, however. At a minimum, two views at right angles to one an-other should be obtained when a fracture or dislocation is suspected, because such injuries are notorious for being very subtle or even invisible in one projection, even when they are glaringly obvious in another view (Figure 6-1). Radiographs should be focused on the anatomic area being evaluated, free of overlapping, extraneous anatomy (Figure 6-2). If the kneeis the site of trouble, do not order views of the entire tibia and fibula; you will be disappointed with the visualization of the knee. This principle must be abandoned more or less in young children and mentally impaired individuals who may not be able to localize their symptoms well, and also in trauma victims with so many injuries that the relatively minor ones may be overlooked. 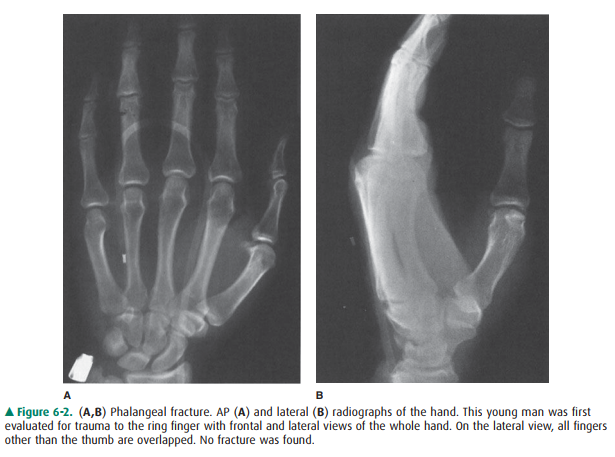 In addition, when the radiographs will be studied by a consulting radiologist, it is helpful to provide a succinct yet accurate history pinpointing your clinical concerns. Simply indicating the site of injury will improve the likelihood that a subtle fracture will be discovered. 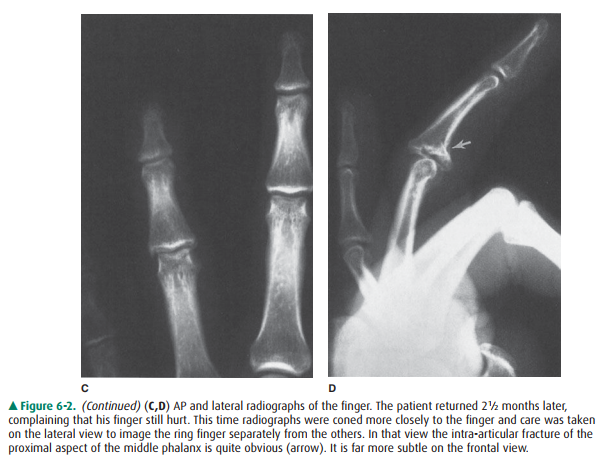 A conventional radiograph of a normal bone will show a smooth, homogenous cortex surrounding the medullary space. The cortex will be thicker along the shaft (diaphysis) of long bones and thinner in small, irregular bones such as the carpal and tarsal bones and at the ends of long bones (Figure 6-3). Exceptions are the normal roughening of the cortex at tendon and ligament insertion sites and the normal interrup-tion of the cortex at the site of the nutrient arteries. Naturally these occur at predictable places that differ from bone to bone. Within the medullary space of normal bone are trabec-ulae. These are visible in radiographs as thin, crisp white lines that are arranged not randomly but in predictable patterns that enhance the stress-bearing capability of the bone. 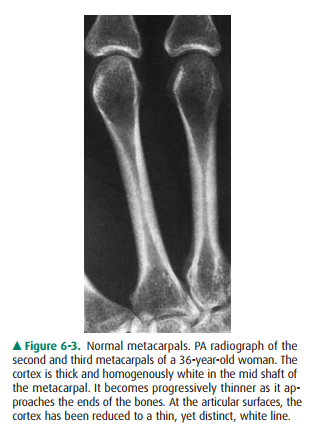 When questions arise concerning whether a particular appearance is normal or abnormal, several solutions are possible. Two books, Keats’s Normal Variants and Kohler’s Borderlands, are very useful in helping to distinguish the nor-mal from the abnormal (see suggested reading). Correlation with the results of the history and physical examination may also be helpful. Finally, comparison with the patient’s prior radiographs or with a radiograph of the opposite extremity may also help (Figure 6-4). Comparison views of the oppo-site extremity are especially helpful in children, in whom the open physes and accessory centers of ossification may vary considerably from individual to individual but tend to vary less from side to side than among different people. 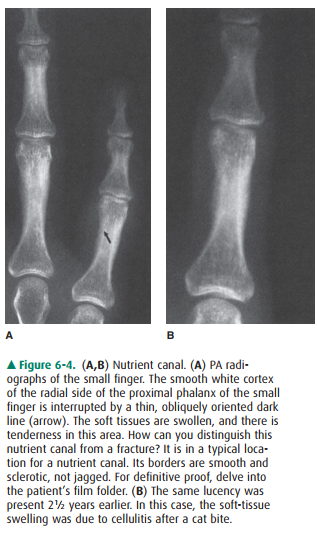 Any soft-tissue area that can be pulled away from the skeleton and placed between the compression paddle and detector may be imaged with mammographic technique. In extremity imag-ing, mammographic technique is occasionally used to search for small calcifications or foreign bodies in the soft tissues.

Fluoroscopy plays an important role in evaluation of joint mo-tion. It is often used by orthopedic surgeons to monitor place-ment of hardware. It may be of assistance in positioning patients for unusual or difficult conventional radiographic views. 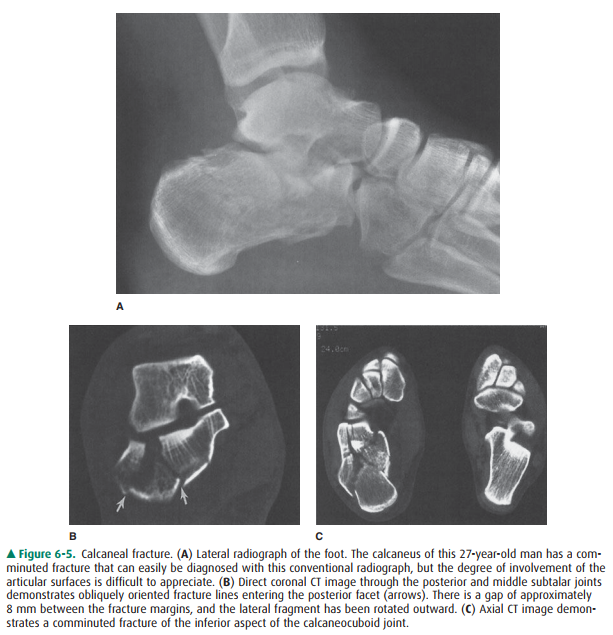 Tomography (either conventional complex-motion tomog-raphy or computed tomography [CT]) has two major uses in skeletal imaging. The first is evaluation of fracture frag-ment position. CT provides excellent delineation of fractures purposes, as they can often be understood by less experienced individuals. They do not, however, contain information be-yond that available in tomographic images. 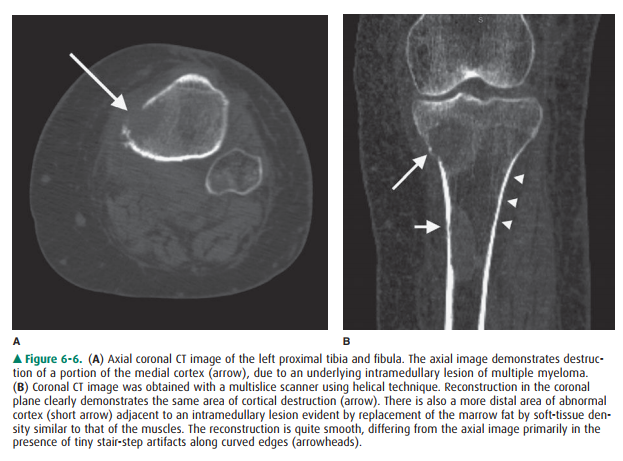 The second major use of CT is in evaluation of bone tu-mors or tumor-like diseases. For this purpose, magnetic reso-nance (MR) imaging is the principal competing technique. CT is more sensitive than MRI in demonstrating small amounts of calcium and can show early periosteal new bone formation or small amounts of matrix calcification before they may be seen with conventional radiography. This finding can be helpful in narrowing the differential diagnosis of a tumor. MRI can easily obtain images in sagittal and coronal planes, which was once an advantage this technique had over CT. Multislice CT scan-ners have negated this advantage (Figure 6-6). Before MRI was developed, CT was also used widely for determining the extent of soft-tissue tumors, including osseous tumors that have spread into the soft tissues. MRI, however, is now more often used for staging. Its superior contrast resolution greatly eases the task of determining tumor extent within bone marrow and muscle or other soft tissues (Figure 6-7). 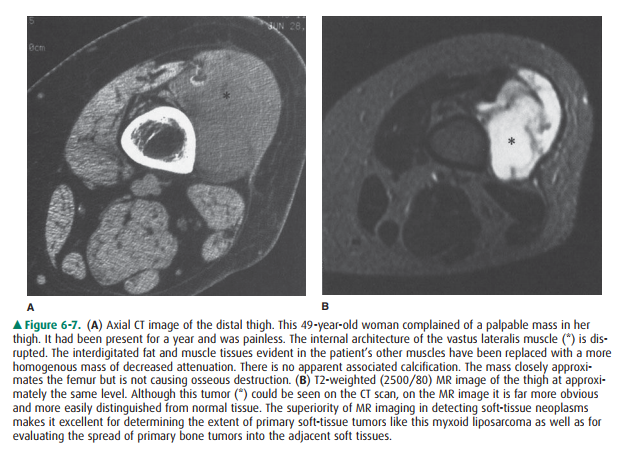 The exquisite contrast of MRI makes it ideal for evaluation of soft tissues. Its most frequent use in skeletal imaging, there-fore, is for diagnosis of injuries to muscles, tendons, or liga-ments about joints. This superb contrast resolution also makes it very useful for evaluating disorders of the bone mar-row including neoplasm, marrow-packing diseases such asGaucher’s disease, osteomyelitis, fractures that are occult on conventional radiographs, and avascular necrosis. Unfortu-nately, although MRI is very sensitive to these abnormalities, it is also very nonspecific. Many diseases of marrow cause similar signal alteration. One must then narrow the differen-tial diagnosis based on the distribution of the abnormalities together, the radiographic appearance, and the clinical his-tory. Diffusion-weighted MR imaging may be used to identify areas of an organ that have recently been damaged or injured. Diffusion-weighted MR imaging of the vertebral body may differentiate benign from malignant fracture, although its usefulness is still controversial.

Several nuclear medicine studies are used for skeletal dis-ease. The two most common are the technetium bone scan and fused positron emission tomography and computed to-mography (PET-CT). One of several phosphate compounds of technetium-99m is selected for use in bone scan. Methyl-ene diphosphonate (MDP) is used most frequently. If there is a specific anatomic area of interest, images may be ac-quired over that area at the time the radionuclide is injected, as well as 3 to 4 hours later. The immediate images reflect the amount of blood flow to the area; the delayed images reflect the amount of bone remodeling occurring there.

Bone scintigraphy is a sensitive but not very specific tech-nique. Most osseous abnormalities of clinical significance will cause an increase in radionuclide accumulation. Exceptions are destructive lesions that incite little reparative reaction in the host bone or that destroy bone so quickly that it cannot remodel.

Because of their sensitivity and because they provide physiologic rather than anatomic information, bone scans can be used to find abnormalities before they are detectable by conventional radiography. In particular, they are often used for screening for bone metastases in patients with known malignancy. Both multiple myeloma in adults and Langerhans cell histiocytosis in children, however, are notori-ous for causing no increased accumulation on bone scans. Therefore, in these diseases conventional radiographs or skeletal surveys are better than bone scans for screening for osseous involvement. MR imaging is sometimes also used for screening for myeloma or metastatic disease.

Fused positron emission tomography–computed tomogra-phy (PET/CT) combines in a single gantry system both PET scanner and CT scanner, so that images acquired from both techniques can be taken sequentially in the same session and combined into a single superimposed image. Thus, functional imaging obtained by PET, which depicts the spatial distribution of metabolic or biochemical activity in the body, can be more precisely aligned or correlated with anatomic imaging obtained by CT scanning. Other imaging studies may also be fused to combine metabolic information of a nuclear study with anatomic information. For example, a SPECT bone scan may be combined with CT or a PET scan may be combined with MRI.

When tumor or infection is suspected, it is often useful to ob-tain a tissue sample for cytologic or histologic analysis or for culture. This may be accomplished by means of an “open” procedure in the operating room or a percutaneous needle puncture of the lesion to obtain a cellular aspirate or slender core of tissue. Needle biopsies of palpable lesions do not nec-essarily need radiologic intervention. When the lesion is not palpable, however, biopsy may be accomplished under fluo-roscopic, CT, ultrasound, or MRI guidance.

When skeletal lesions should be biopsied and by whom are important questions that can have a tremendous impact on the patient’s outcome. For example, sarcomas have been reported to grow along the surgical or needle tracks after diagnostic biopsies. Therefore, when planning biopsies of suspected mus-culoskeletal sarcomas, care must be taken to approach the le-sion through a track that can be resected en bloc with the tumor at the time of ultimate excision. These biopsies should always be carried out in close consultation with the surgeon who will be performing the definitive surgery.

When systemic disease such as metastatic carcinoma is the primary consideration, percutaneous needle biopsy is the most efficacious means of making a diagnosis if the lesion is amenable to this procedure. In this setting, the yield of needle biopsy is very good (90% or more of such biopsies yield a positive diagnosis when tumor is truly present) and a nega-tive result is less likely to lead to open biopsy than it would in some suspected primary tumors. Nonetheless, biopsy should still be performed in consultation with the oncologist or other physician giving overall care.