6-6. Based on the history, physical examination, and radi-ographs for Case 6-6 (Figure 6-19), which of the fol-lowing choices is the best working diagnosis? 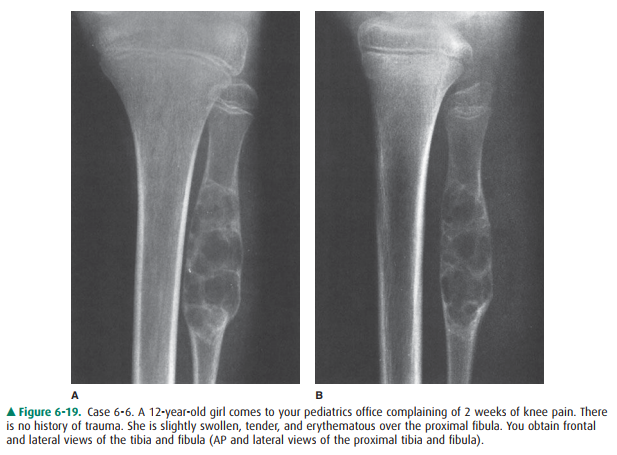 A.   A bone tumor, most likely benign

B.   A bone tumor, most likely malignant

C.   An infection of the bone

D.   A stress fracture of the proximal fibula 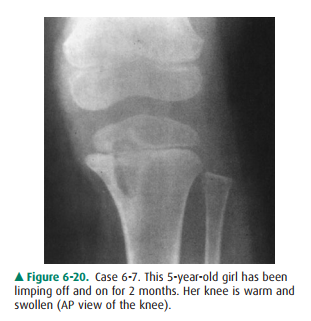 B.   A malignant bone tumor 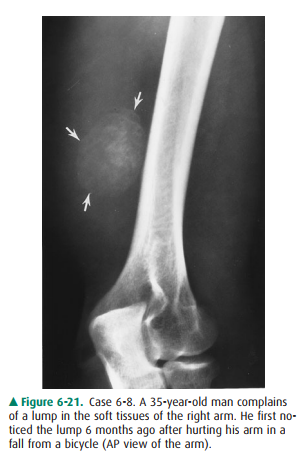 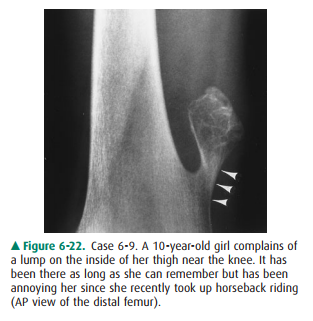 6-6. Focal lytic lesion in the proximal fibular metadia-physis with an intact shell of new cortex and a well-defined, short zone of transition between itself and adjacent normal bone (A is the correct answer to Question 6-6).

6-7. There is a well-defined lytic lesion in the proximal tibia. Its edges are slightly sclerotic. It extends across the physis to involve portions of both the metaph-ysis and epiphysis (A is the correct answer to Ques-tion 6-7).

6-8. A well-defined ossified mass projects in the muscula-ture of the posterolateral arm. It has a thin but dis-tinct cortex (arrows) surrounding trabeculae (Figure 6-21) (C is the correct answer to Question 6-8).

6-9. Arising from the medial cortex of the femur is an ossified mass topped by a cauliflower-like thin shell of cortex (Figure 6-22). The cortex of the remainder of the femur is continuous with the cortex of the tumor (arrowheads), and the trabecular bone of the femoral metaphysis blends imperceptibly with that of the mass. The mass has grown away from its metaphyseal place of origin and points toward the diaphysis and away from the joint (B is the correct answer to Question 6-9).

Case 6-6: The radiographs demonstrate a focal lytic lesion in the proximal fibular metadiaphysis. The cortex appears intact around the lesion, and the bone is widened. Cortex is not pli-able; it will not stretch to accommodate a growing lesion. In-stead it will slowly remodel by resorption of endosteal bone and deposition of periosteal new bone. The process takes time, so intact but extended cortex implies a slow growth rate for this lesion. Another indication of a slow growth rate is the sharp demarcation or short zone of transition between the lesion and adjacent normal bone.

In general, osteomyelitis will not cause apparent expan-sion of bone the way this lesion has. Stress fractures are usu-ally linear lesions and usually are oriented transversely across the bone, though there are exceptions. Stress fractures may be lucent, if a gap in cortical bone is their primary man-ifestation, or sclerotic, either due to compression of trabecu-lae with resultant overlap or due to healing. The periosteal reaction that they engender may cause them to be mistaken for bone tumors, but they will not look like this particular le-sion (Figure 6-23).

Of the choices given in the question, the remaining ones are benign and malignant bone tumor. For the most part, malignant bone tumors in children have a rapid growth rate. This will cause them to have poorly defined borders. In addi-tion, where they destroy cortex, the periosteum will be unable to contain them with solidly mineralized new bone, as has occurred here. There may be gaps in the cortex where tumor has broken through (Figure 6-24). The periosteal new bone may mineralize at 90-degree angles to the diaphysis or may be lamellated (like onion skin) or incomplete. The intact shell of periosteal new bone seen in this patient and the short zone of transition are more typical of a benign than a malignant tumor. 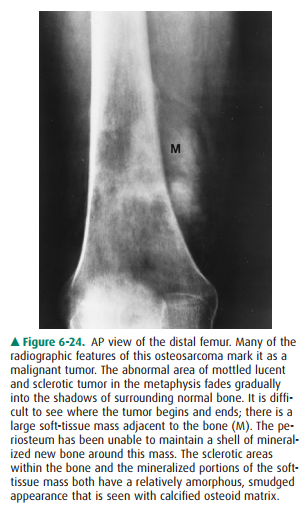 A primary bone tumor, no matter how benign its appear-ance, is most appropriately handled by an orthopedic oncologic surgeon experienced with tumors. As you have been stipulated to be a pediatrician, the patient should be sent to an orthopedic surgeon who specializes in the treatment of tumors.

Performing a percutaneous needle biopsy has the poten-tial to cause great harm if a poorly chosen route is taken. For example, if the needle passed close to the common peroneal nerve and then the lesion proved unexpectedly to be malig-nant, the nerve might have to be sacrificed in order to obtain a curative resection.

Obtaining additional imaging studies to evaluate this lesion further is not a bad idea. It is better, however, to allow the orthopedic surgeon to whom the patient will be referred (in consultation with the radiologist) to decide which imaging tests are most appropriate to evaluate the lesion more thoroughly rather than ordering additional tests before referral.

Case 6-7: The edges of malignant tumors are usually not as well defined as those of this lesion. Malignant tumors may extent across the growth plate, but it is uncommon for them to do so while they are still as small as this lesion.

Osteomyelitis, on the other hand, often breaches the growth plate. The most common organisms to cause os-teomyelitis are species of Staphylococcus and Streptococcus (Figure 6-25). The relatively long history of limping, how-ever, should suggest a more indolent organism. This case was due to Mycobacterium tuberculosis. Skeletal tuberculo-sis is uncommon and thus often is overlooked as a diagnos-tic possibility. Today, it is most commonly seen in the immunocompromised individual. Because it is curable yet responds to very different drugs than would be used for pyogenic osteomyelitis, it is important to keep it in mind. It may occur at any site, but it is most common in the spine. In the extremities, it most often occurs in or near the hip and knee.

Langerhans cell histiocytosis (eosinophilic granuloma) is much less common than osteomyelitis and is thus not as likely a diagnosis. When it does occur, its favorite location is the skull. 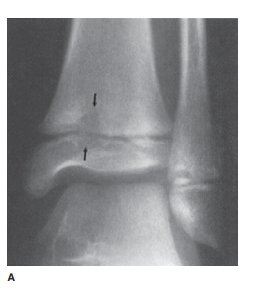 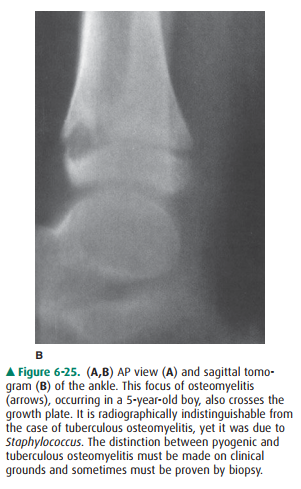 Case 6-8: This ossified mass represents myositis ossificans, also known as heterotopic new bone formation. Though often associated with trauma, it may also be seen in patients without a distinct history of trauma. When it resembles ma-ture bone as closely as in this patient, it is not a diagnostic dilemma, and you can reassure the patient that there is a be-nign cause for his lump.

Occasionally, myositis ossificans warrants excision on the basis of mechanical interference with the use of a mus-cle or joint. Recurrence is less likely if excision is per-formed after the lesion has matured. A bone scan may help to distinguish between mature and immature lesions. An immature lesion that is still undergoing ossification will exhibit marked radionuclide uptake. Once ossification is complete, radionuclide accumulation will resemble that of other bones.

Myositis ossificans may be diagnosed more confidently with radiography than with histology. An immature lesion will be full of immature, rapidly proliferating cells that may be mistaken for sarcoma by the pathologist. Radiologically, however, there is a distinct difference between the two. Myositis ossificans ossifies from the outside in. Sarcomas os-sify from the inside out. See Figure 6-24 and notice that the central portion of the soft-tissue mass is denser (more ossi-fied) than the outer portion. If it is not entirely clear from conventional radiographs where and how the ossification is occurring, a CT scan is the test of choice because of its ability to demonstrate calcium. 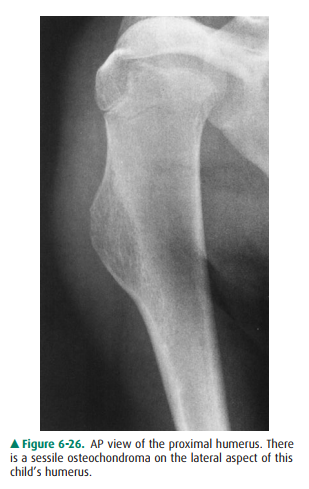 Case 6-9: This mass has the characteristic appearance of an osteochondroma, the most common of all benign, carti-laginous neoplasms. Osteochondromas may be very large or very small, pedunculated or sessile (Figure 6-26). They grow as the child grows and should cease growth by adulthood. Often asymptomatic, they may be an incidental finding. They may, however, cause a wide range of symptoms. The most common complaint is that they interfere with activities or with wearing certain clothes, such as tight blue jeans. They may be painful as a result of irritation of an overlying bursa (Figure 6-27). And they are subject to fracture. An un-common (1% or less) but feared complication is malignant transformation, usually resulting in chondrosarcoma. Signs of such transformation include enlargement of the osteo-chondroma in an adult, thickening of the cartilaginous cap that covers the tumor, development of a soft-tissue mass, and destruction of bone. 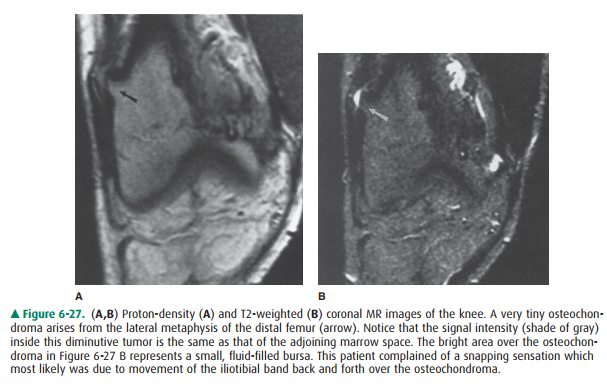 When further radiologic studies are needed, MR imaging or ultrasound are probably the most useful modalities. Both can demonstrate the cartilage cap and any associated soft tis-sue mass. When the diagnosis is not as obvious as in this case by conventional radiography, MRI can assist in confirming the identity of the tumor by demonstrating continuity be-tween the cortices and medullary spaces of the tumor and the host bone.