Within the muscle fiber are thousands of individual contracting units called sarcomeres, which are arranged end to end in cylinders called myofibrils.

We will now look more closely at a muscle fiber, keep-ing in mind that there are thousands of these cylindri-cal cells in one muscle. Each muscle fiber has its own motor nerve ending; the neuromuscular junction is where the motor neuron terminates on the muscle fiber (Fig. 7–2). The axon terminal is the enlarged tip of the motor neuron; it contains sacs of the neuro-transmitter acetylcholine(ACh). The membrane of the muscle fiber is the sarcolemma, which contains receptor sites for acetylcholine, and an inactivator called cholinesterase. The synapse (or synaptic cleft) is the small space between the axon terminal and the sarcolemma. 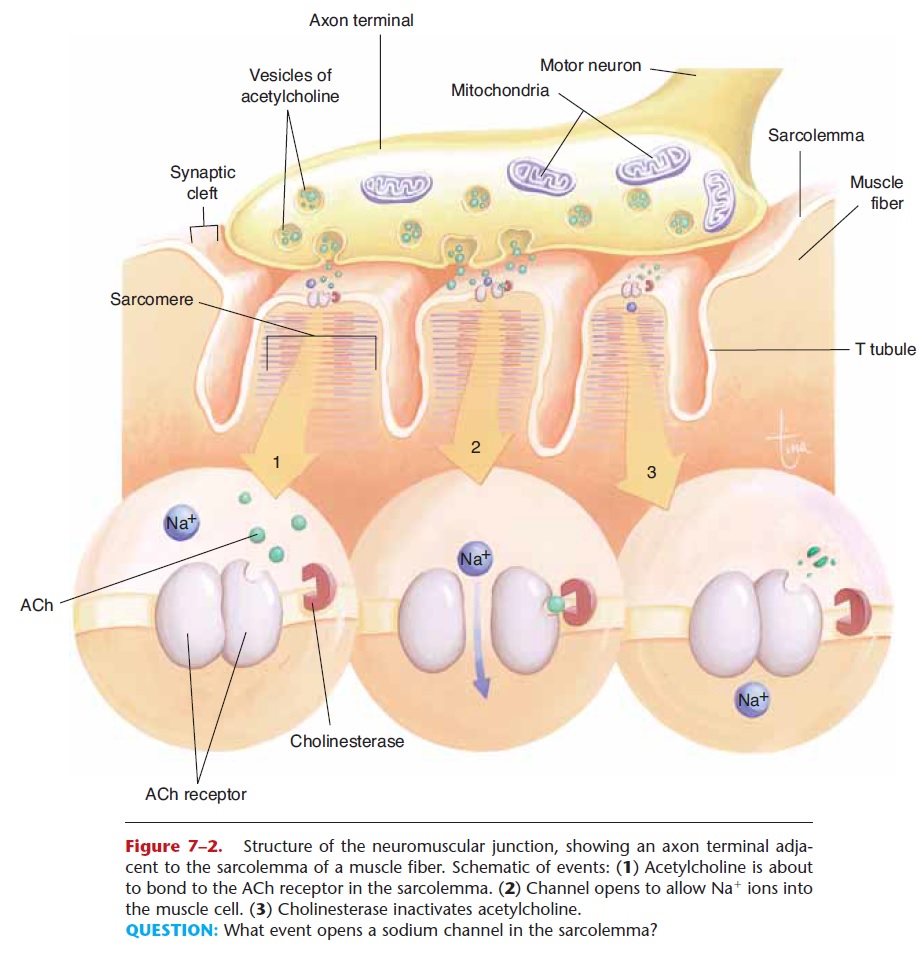 Figure 7–2. Structure of the neuromuscular junction, showing an axon terminal adja-cent to the sarcolemma of a muscle fiber. Schematic of events: (1) Acetylcholine is about to bond to the ACh receptor in the sarcolemma. (2) Channel opens to allow Na+ ions into the muscle cell. (3) Cholinesterase inactivates acetylcholine.

QUESTION: What event opens a sodium channel in the sarcolemma? 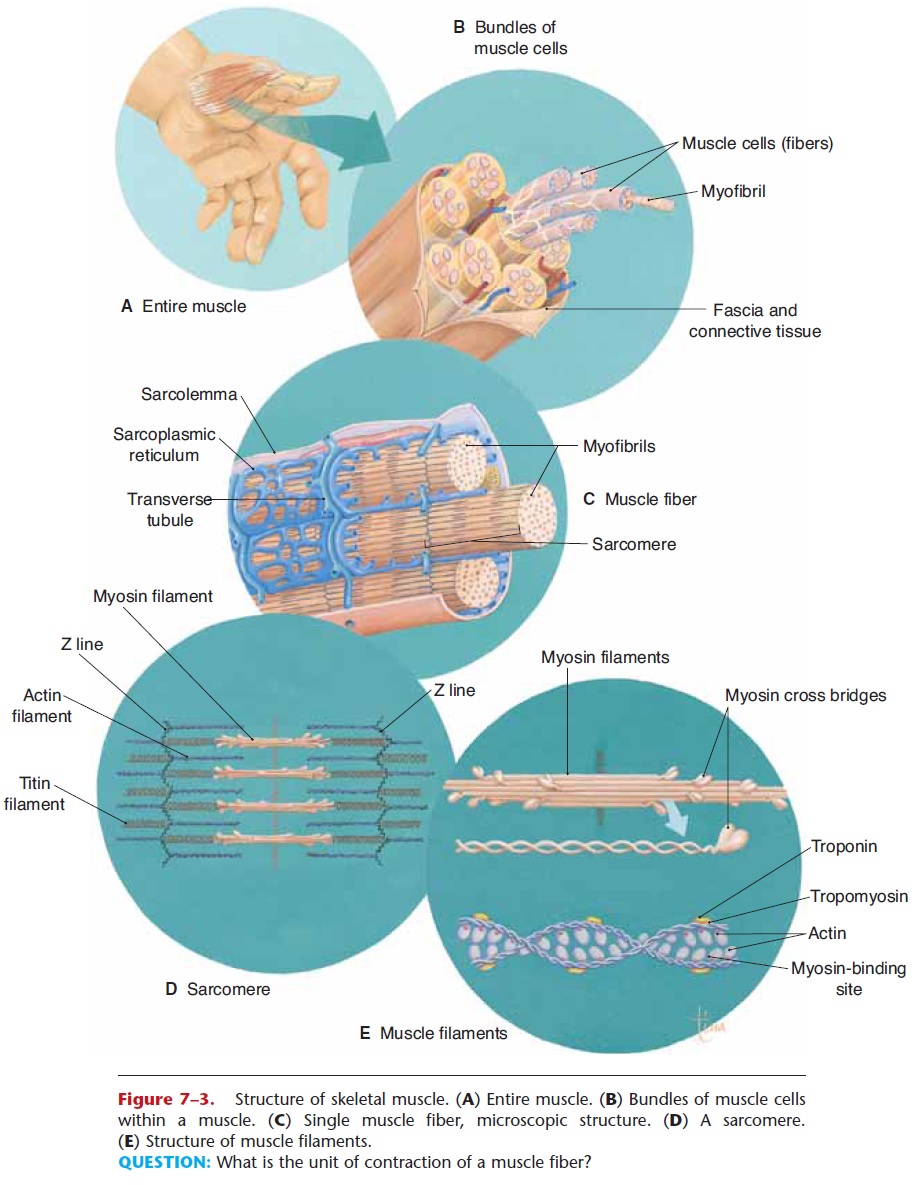 QUESTION: What is the unit of contraction of a muscle fiber?

Myosin and actin are the contractile proteins of a muscle fiber. Their interactions produce muscle con-traction. Also present are two inhibitory proteins, tro-ponin and tropomyosin, which are part of the actin filaments and prevent the sliding of actin and myosin when the muscle fiber is relaxed.

All of these parts of a muscle fiber are involved in the contraction process. Contraction begins when a nerve impulse arrives at the axon terminal and stimu-lates the release of acetylcholine. Acetylcholine gener-ates electrical changes (the movement of ions) at the sarcolemma of the muscle fiber. These electrical changes initiate a sequence of events within the mus-cle fiber that is called thesliding filament mecha-nism of muscle contraction. We will begin our discussion with the sarcolemma.

When a muscle fiber is relaxed, the sarcolemma is polarized (has a resting potential), which refers to a difference in electrical charges between the outside and the inside. During polarization, the outside of the sarcolemma has a positive charge relative to the inside, which is said to have a negative charge. Sodium ions (Na+) are more abundant outside the cell, and potassium ions (K+) and negative ions are more abun-dant inside (Fig. 7–4). 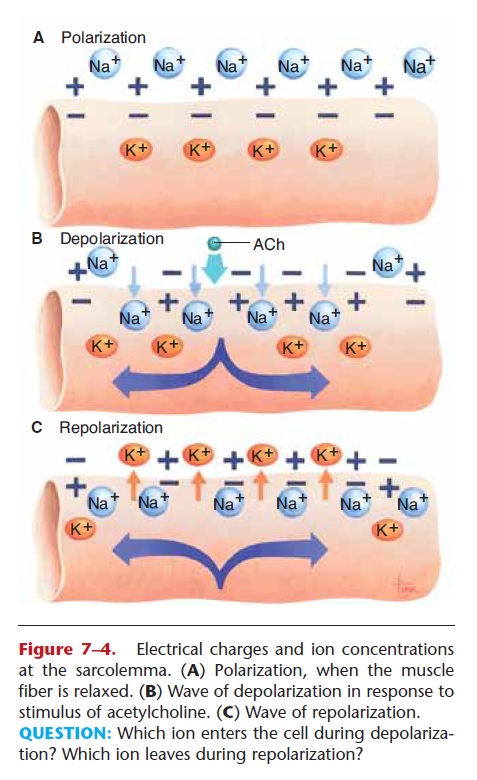 Figure 7–4. Electrical charges and ion concentrations at the sarcolemma. (A) Polarization, when the muscle fiber is relaxed. (B) Wave of depolarization in response to stimulus of acetylcholine. (C) Wave of repolarization.

The Na+ ions outside tend to diffuse into the cell, and the sodium pump transfers them back out. The K+ ions inside tend to diffuse outside, and the potassium pump returns them inside. Both of these pumps are active transport mechanisms, which, you may recall, require ATP. Muscle fibers use ATP to maintain a high concentration of Na+ ions outside the cell and a high concentration of K+ inside. The pumps, there-fore, maintain polarization and relaxation until a nerve impulse stimulates a change.

When a nerve impulse arrives at the axon terminal, it causes the release of acetylcholine, which diffuses across the synapse and bonds to ACh receptors on the sarcolemma. By doing so, acetylcholine makes the sarcolemma very permeable to Na+ ions, which rush into the cell. This makes the inside of the sarcolemma positive relative to the outside, which is now consid-ered negative. This reversal of charges is called depo-larization. The electrical impulse thus generated (called an action potential) then spreads along the entire sarcolemma of a muscle fiber. The sarcolemma has inward folds called T tubules (transverse tubules, shown in Fig. 7–2), which carry the action potential to the interior of the muscle cell. Depolarization initiates changes within the cell that bring about contraction. The electrical changes that take place at the sar-colemma are summarized in Table 7–1 and shown in Fig. 7–4. 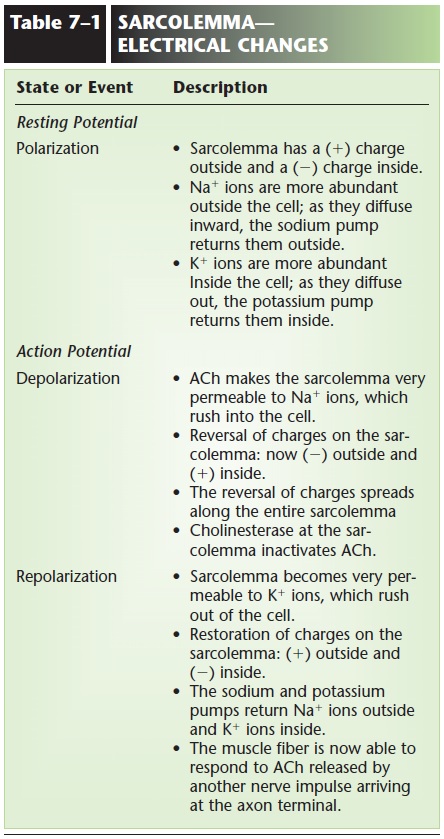