All of the parts of a muscle fiber and the electrical changes described earlier are involved in the contrac-tion process, which is a precise sequence of events called the sliding filament mechanism.

All of the parts of a muscle fiber and the electrical changes described earlier are involved in the contrac-tion process, which is a precise sequence of events called the sliding filament mechanism.

1.           A nerve impulse arrives at the axon terminal; acetylcholine is released and diffuses across the synapse.

2.           Acetylcholine makes the sarcolemma more per-meable to Na+ ions, which rush into the cell.

3.           The sarcolemma depolarizes, becoming negative outside and positive inside. The T tubules bring the reversal of charges to the interior of the mus-cle cell.

4.           Depolarization stimulates the release of Ca12 ions from the sarcoplasmic reticulum. Ca12 ions bond to the troponin–tropomyosin complex, which shifts it away from the actin filaments.

5.           Myosin splits ATP to release its energy; bridges on the myosin attach to the actin filaments and pull them toward the center of the sarcomere, thus making the sarcomere shorter (Fig. 7–5).

7. The sarcolemma repolarizes: K+ ions leave the cell, restoring a positive charge outside and a neg-ative charge inside. The pumps then return Na+ ions outside and K+ ions inside.

8. Cholinesterase in the sarcolemma inactivates acetylcholine.

10. When there are no further impulses, the muscle fiber will relax and return to its original length. 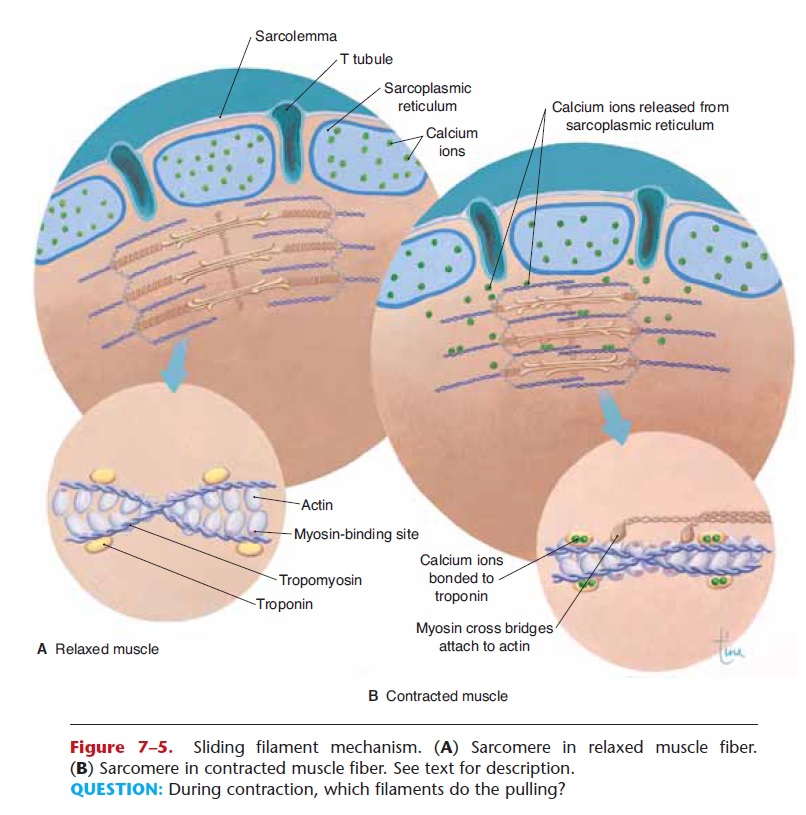 QUESTION: During contraction, which filaments do the pulling?

Steps 1 through 8 of this sequence describe a single muscle fiber contraction (called a twitch) in response to a single nerve impulse. Because all of this takes place in less than a second, useful movements would not be possible if muscle fibers relaxed immediately after contracting. Normally, however, nerve impulses arrive in a continuous stream and produce a sustained con-traction calledtetanus, which is a normal state not to be confused with the disease tetanus. When in tetanus, muscle fibers remain contracted and are capable of effective movements. In a muscle such as the biceps brachii that flexes the forearm, an effective movement means that many of its thousands of muscle fibers are in tetanus, a sustained contraction.

As you might expect with such a complex process, muscle contraction may be impaired in many different ways. Perhaps the most obvious is the loss of nerve impulses to muscle fibers, which can occur when nerves or the spinal cord are severed, or when a stroke (cerebrovascular accident) occurs in the frontal lobes of the cerebrum. Without nerve impulses, skele-tal muscles becomeparalyzed, unable to contract. Paralyzed muscles eventually atrophy, that is, become smaller from lack of use.