Major Muscles of the Body 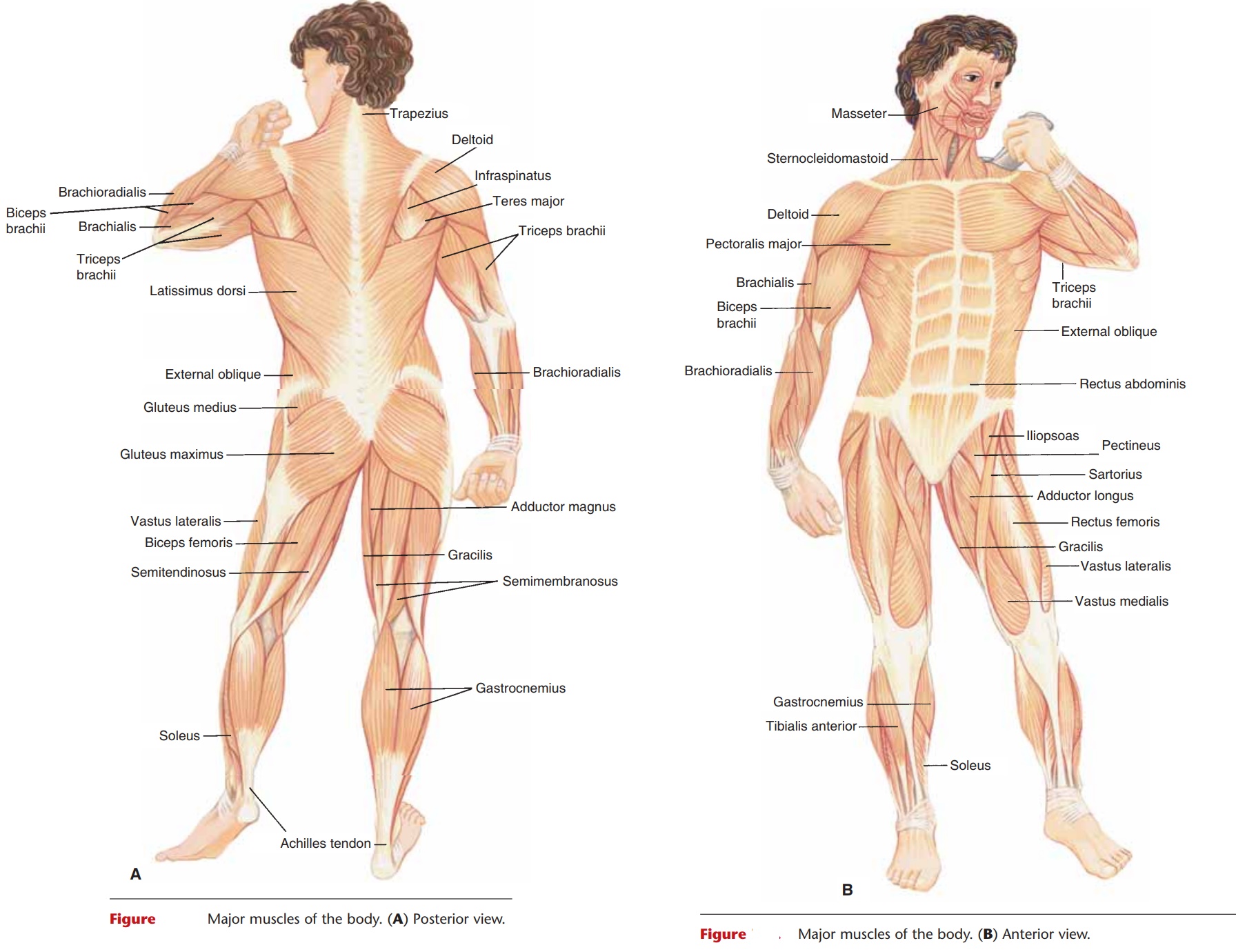 The actions that muscles perform are listed in Table 7–2 and some are shown in Fig. 7–7. Most are in pairs as antagonistic functions.

MAJOR MUSCLES OF THE BODY

The actions that muscles perform are listed in Table 7–2 and some are shown in Fig. 7–7. Most are in pairs as antagonistic functions. 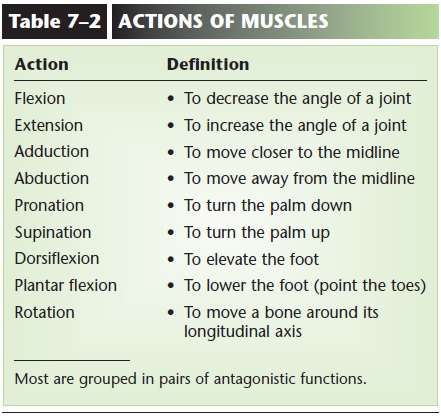 After the brief summaries of the muscles of each body area that follow, the major muscles are shown in Fig. 7–8. They are listed, according to body area, in Tables 7–3 through 7–7, with associated Figs. 7–9 through 7–13, respectively. When you study the dia-grams of these muscles, and the tables that accompany them, keep in mind the types of joints formed by the bones of their origins and insertions. Muscles pull bones to produce movement, and if you can remember the joints involved, you can easily learn the locations and actions of the muscles.

The name of the muscle may also be helpful, and again, many of the terms are ones you have already learned. Some examples: “abdominis” refers to an abdominal muscle, “femoris” to a thigh muscle, “brachii” to a muscle of the upper arm, “oculi” to an eye muscle, and so on. Other parts of muscle names may be words such as “longus” or “maximus” that tell you about size, or “flexor” that tells you about function. 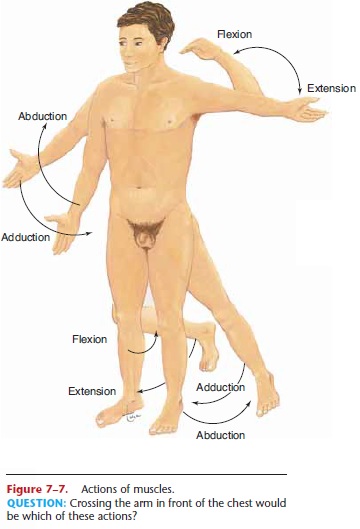 QUESTION: Crossing the arm in front of the chest would be which of these actions?

MUSCLES OF THE HEAD AND NECK

Three general groups of muscles are found in the head and neck: those that move the head or neck, the mus-cles of facial expression, and the muscles for chewing. The muscles that turn or bend the head, such as the sternocleidomastoids (flexion) and the pair of splenius capitis muscles (extension), are anchored to the skull and to the clavicle and sternum anteriorly or the ver-tebrae posteriorly. The muscles for smiling or frown-ing or raising our eyebrows in disbelief are anchored to the bones of the head or to the undersurface of the skin of the face. The masseter is an important chewing muscle in that it raises the mandible (closes the jaw).

MUSCLES OF THE TRUNK

The muscles of the trunk cannot be described with one or two general functions. Some form the wall of the trunk and bend the trunk, such as the rectus abdo-minis (f lexion) and the sacrospinalis group (exten-sion). The trapezius (both together form the shape of a trapezoid) is a large muscle that can raise (shrug) the shoulder or pull it back, and can help extend the head. Other muscles found on the trunk help move the arm at the shoulder. The pectoralis major is a large muscle of the chest that pulls the arm across the chest (flexion and adduction). On the posterior side of the trunk, the latissimus dorsi pulls the arm downward and behind the back (extension and adduction). These muscles have their origins on the bones of the trunk, the ster-num, the or vertebrae, which are strong, stable anchors. Another set of muscles forms the pelvic floor, where the muscles support the pelvic organs and assist with urination and defecation. Yet another category is the muscles that are concerned with breathing. These are the intercostal muscles between the ribs and the diaphragm that separates the thoracic and abdominal cavities (see Fig. 15–6).

MUSCLES OF THE SHOULDER AND ARM

The triangular deltoid muscle covers the point of the shoulder like a cap, and can pull the humerus to the side (abduction), forward (flexion), or backward (extension). You already know the functions of the biceps brachii and triceps brachii, the muscles that form the bulk of the upper arm. Other muscles par-tially in the upper arm help bend the elbow (flexion). The muscles that form the bulk of the forearm are the flexors and extensors of the hand and fingers. You can demonstrate this yourself by clasping the middle of your right forearm with your left hand, then moving your right hand at the wrist and closing and opening a fist; you can both feel and see the hand and finger muscles at work.

MUSCLES OF THE HIP AND LEG

The hip muscles that move the thigh are anchored to the pelvic bone and cross the hip joint to the femur. Among these are the gluteus maximus (extension), gluteus medius (abduction), and iliopsoas (flexion). The muscles that form the thigh include the quadri-ceps group anteriorly and the hamstring group posteriorly. For most people, the quadriceps is stronger than the hamstrings, which is why athletes more often have a “pulled hamstring” rather than a “pulled quadriceps.” Movement of the knee joint depends on thigh muscles and lower leg muscles. Movement of the foot depends on lower leg muscles such as the gastrocnemius (dorsiflexion or flexion) and the tibialis anterior (plantar flexion or extension). 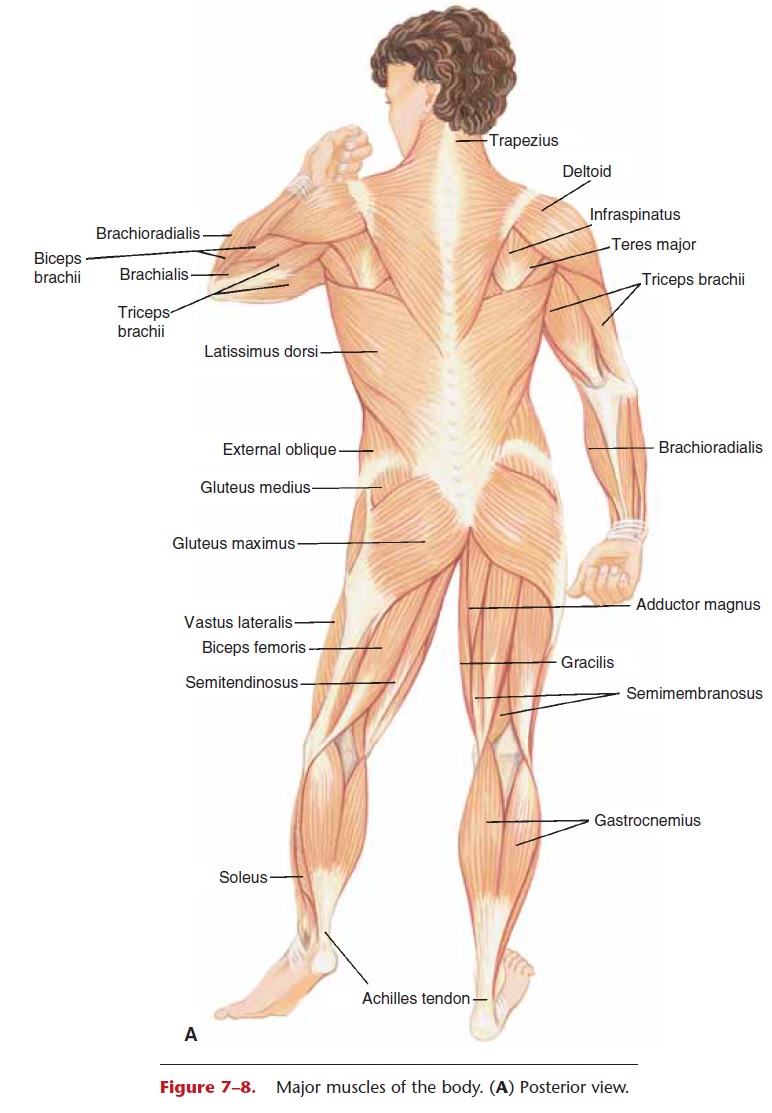 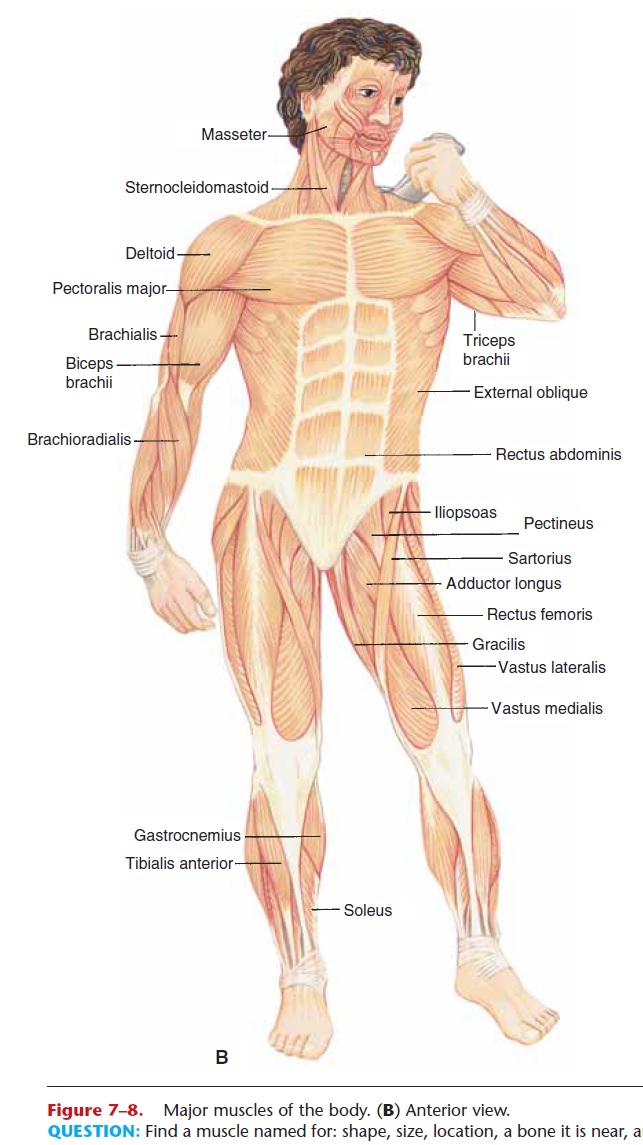 Figure 7–8. Major muscles of the body. (B) Anterior view.

QUESTION: Find a muscle named for: shape, size, location, a bone it is near, and function. 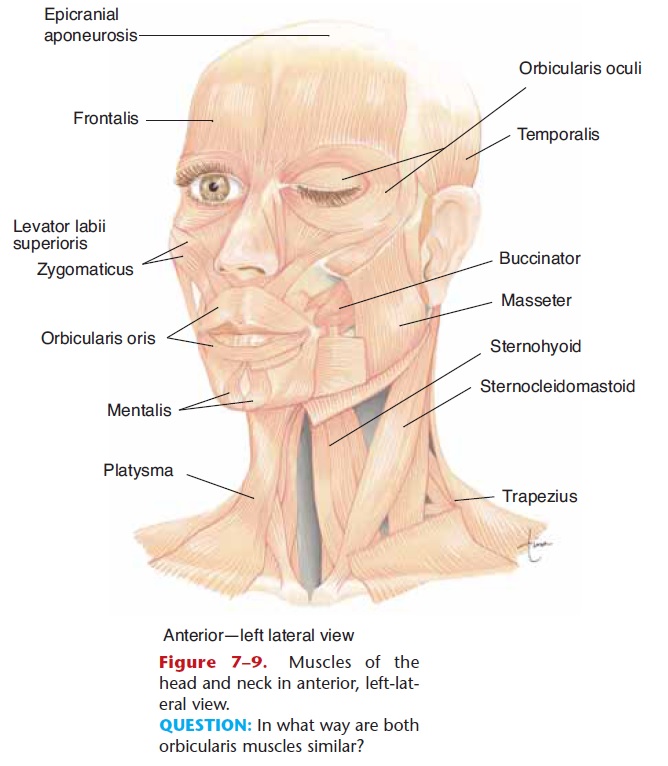 Figure 7–9. Muscles of the head and neck in anterior, left-lat-eral view.

QUESTION: In what way are both orbicularis muscles similar? 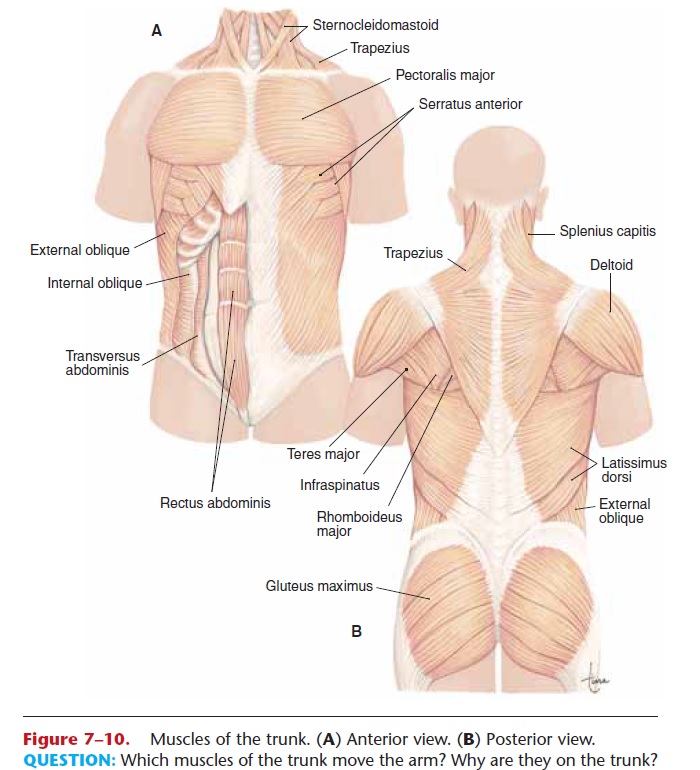 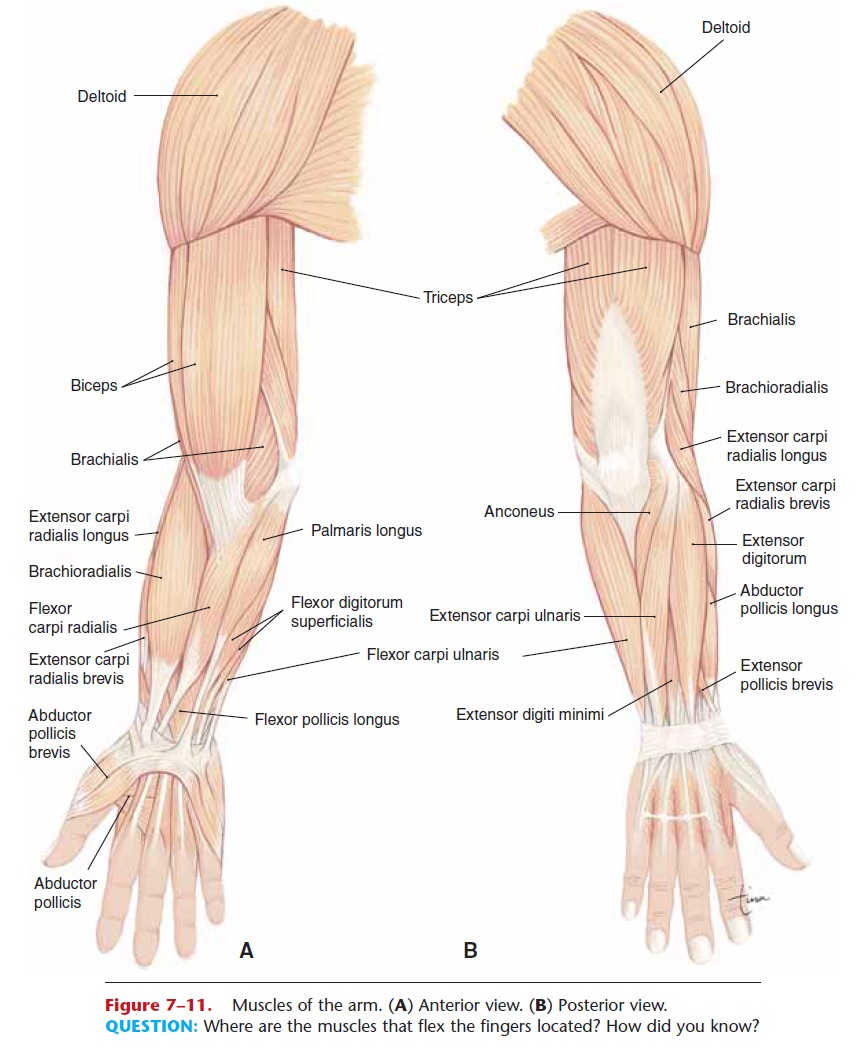 Figure 7–11. Muscles of the arm. (A) Anterior view. (B) Posterior view. QUESTION: Where are the muscles that flex the fingers located? How did you know? 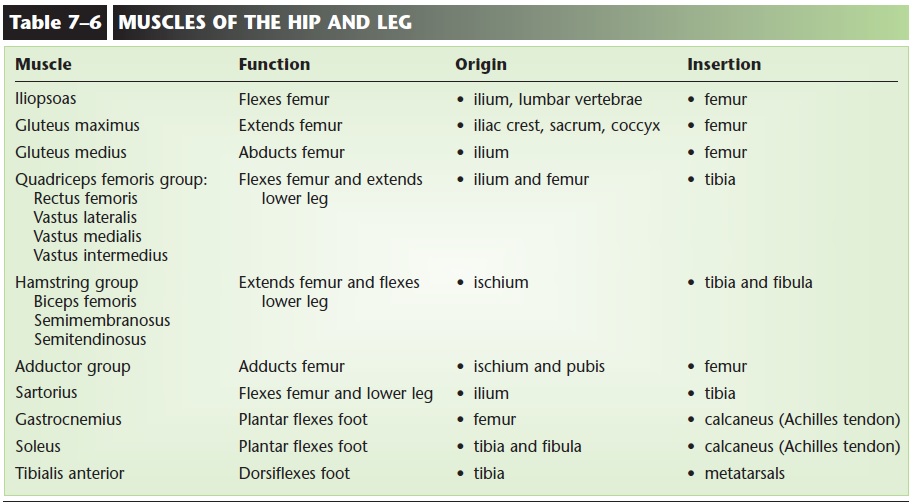 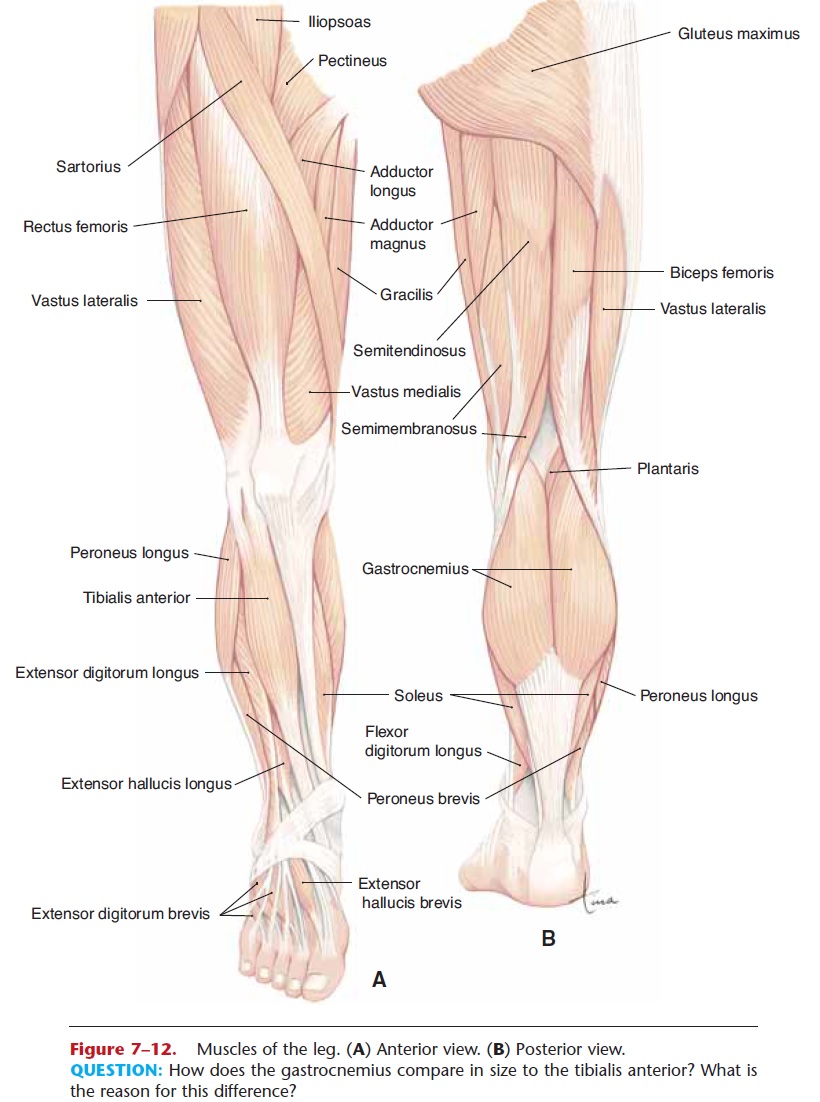 QUESTION: How does the gastrocnemius compare in size to the tibialis anterior? What is the reason for this difference? 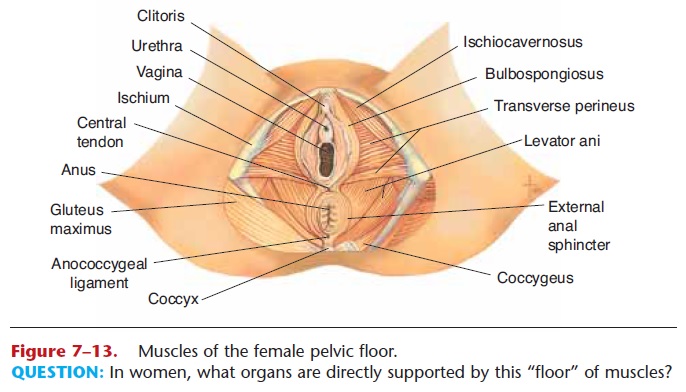 QUESTION: In women, what organs are directly supported by this “floor” of muscles?