A multiprocessor is, in general, any computer system with two or more processors coupled together.

A multiprocessor is, in general, any computer system with two or more processors coupled together. Multiprocessors used for scientific or business applications tend to have regular architectures: several identical processors that can access a uniform memory space. We use the term processing element (PE) to mean any unit responsible for computation, whether it is programmable or not.

Embedded system designers must take a more general view of the nature of multiprocessors. As we will see, embedded computing systems are built on top of an astonishing array of different multiprocessor architectures.

The first reason for using an embedded multiprocessor is that they offer significantly better cost/performance—that is, performance and functionality per dollar spent on the system—than would be had by spending the same amount of money on a uniprocessor system. The basic reason for this is that processing element purchase price is a nonlinear function of performance [Wol08].

The cost of a microprocessor increases greatly as the clock speed increases. We would expect this trend as a normal consequence of VLSI fabrication and market economics. Clock speeds are normally distributed by normal variations in VLSI processes; because the fastest chips are rare, they naturally command a high price in the marketplace.

Because the fastest processors are very costly, splitting the application so that it can be performed on several smaller processors is usually much cheaper.

Even with the added costs of assembling those components, the total system comes out to be less expensive. Of course, splitting the application across multiple processors does entail higher engineering costs and lead times, which must be factored into the project.

Because we pay for that overhead at the nonlinear rate for the processor, as illustrated in Figure 3.7, the savings by segregating time-critical processes can be large—it may take an extremely large and powerful CPU to provide the same responsiveness that can be had from a distributed system.

Many of the technology trends that encourage us to use multiprocessors for performance also lead us to multiprocessing for low power embedded computing. 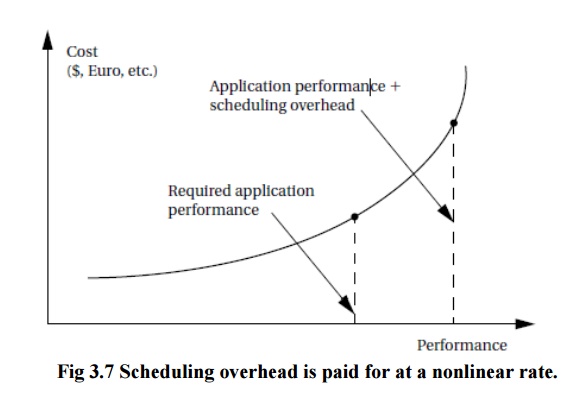 Austin et al. [Aus04] showed that general-purpose computing platforms are not keeping up with the strict energy budgets of battery-powered embedded computing. Figure 3.8 compares the performance of power requirements of desktop processors with available battery power. Batteries can provide only about 75 Mw of power. 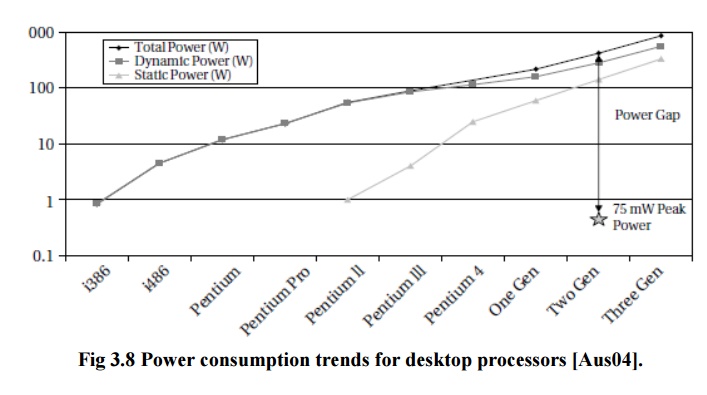 Desktop processors require close to 1000 times that amount of power to run. That huge gap cannot be solved by tweaking processor architectures or software. Multiprocessors provide a way to break through this power barrier and build substantially more efficient embedded computing platforms.