The word monopoly has been derived from the combination of two words i.e., ‘Mono’ and ‘Poly’. Mono refers to a single and “poly” to seller.

The word monopoly has been derived from the combination of two words i.e., ‘Mono’ and ‘Poly’. Mono refers to a single and “poly” to seller.

In this way, monopoly refers to a market situation in which there is only one seller of a commodity. Hence, there is no scope for competition. (Still some economists observe that there will always be potential threat to the monopolists).

Monopoly is a market structure characterized by a single seller, selling the unique product with the restriction for a new firm to enter the market. Monopoly is a form of market where there is a single seller selling a particular commodity for which there are no close substitutes. 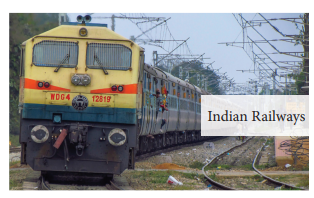 2.        The product of a monopolist is unique and has no close substitute;

Single supplier of some special services (Eg.Railways in India)

A monopoly firm can get its monopoly power by getting patent rights, trade mark from the government.

A monopoly is a one firm-industry. Therefore, a firm under monopoly faces a downward sloping demand curve (or AR curve). Since, under monopoly AR falls, as more units of output are sold, the MR lies below the AR curve (MR<AR). 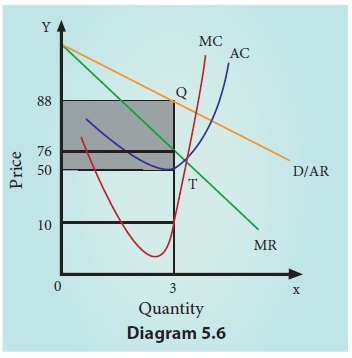 The monopolist will continue to sell his product as long as his MR>MC.

He attains equilibrium at the level of output when its MC is equal to MR. Beyond this point, the producer will experience loss and hence will stop selling.

From this diagram, till he sells 3 units output, MR is greater than MC, and when he exceeds this output level, MR is less than MC. The monopoly firm will be in equilibrium at the level of output where MR is equal to MC. The price is 88.

A discriminating monopoly is a single entity that charges different prices for different consumers. Higher price will be charged for price inelastic consumers and vice versa

There are three types of price discrimination.

Personal – Different prices are charged for different individuals (for example, the railways give tickets at concessional rate to the ‘senior citizens’ for the same journey).

Geographical - Different prices are charged at different places for the same product (for example, a book sold within India at a price is sold in a foreign country at lower price). On their basis, China drops its goods in Indian market. As a result, watch and toys industries closed down their business.

Price discrimination has become widespread in almost all monopoly markets.

According to A.C.Pigou, there are three degrees of price discrimination.

A monopolist charges the maximum price that a buyer is willing to pay. This is called as perfect price discrimination. This price wipes out the entire consumer’s surplus. This is maximum exploitation of consumers. Joan Robinson named it as “Perfect Discriminating Monopoly”

Under this degree, buyers are charged prices in such a way that a part of their consumer’s surplus is taken away by the sellers. This is called as imperfect price discrimination. Joan Robinson named it as “Imperfect Discriminating Monopoly”. Under this degree, buyers are divided into different groups and a different price is charged for each group. For example, in cinema theatres, prices are charged for same film show from viewers of different classes. In a theatre the difference between the

first row of first class and the last row in the second class is smaller as compared to the differences in charges.

The monopolist splits the entire market into a few sub-market and charges different price in each sub-market. The groups are divided on the basis of age, sex and location. For example, railways charge lower fares from senior citizens. Students get discounts in museums, and exhibitions.

Dumping refers to practice of the monopolist charging higher price for his product in the local market and lower price in the foreign market. Through dumping, a country expands its command over other countries for its product. This is also called as ‘International Price Discrimination”.

For example, India’s electronic market is flooded with the China’s products.