(i) The votes obtained by three candidates in an election are as follows: 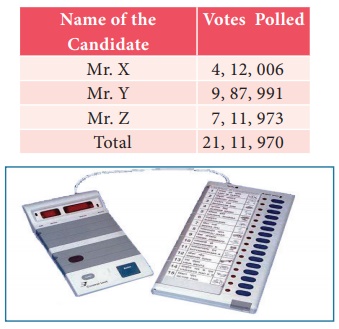 (ii) An Organisation wants to donate sports shoes of same size to maximum number of students of class IX in a School. The distribution of students with different shoe sizes is given below.

If it places order, shoes of only one size with the manufacturer, which size of the shoes will the organization prefer?

In the above two cases, we observe that mean or median does not fit into the situation.

We need another type of average, namely the Mode.

The mode is the number that occurs most frequently in the data.

When you search for some good video about Averages on You Tube, you look to watch the one with maximum views. Here you use the idea of a mode.

For an individual data mode is the value of the variable which occurs most frequently.

In this example, three values 20, 21, 22 occur two times each. There are three modes for the given data!

• A distribution having only one mode is called unimodal.

• A distribution having two modes is called bimodal.

• A distribution having Three modes is called trimodal.

• A distribution having more than three modes is called multimodal.

In a ungrouped frequency distribution, the value of the item having maximum frequency is taken as the mode.

6 has the maximum frequency 9. Therefore 6 is the mode.

In case of a grouped frequency distribution, the exact values of the variables are not known and as such it is very difficult to locate mode accurately. In such cases, if the class intervals are of equal width, an appropriate value of the mode may be determined by

The class interval with maximum frequency is called the modal class.

f − frequency of the modal class

f1 – frequency of the class just preceding the modal class

f2 − frequency of the class succeeding the modal class

c − width of the class interval

Find the mode for the following data. 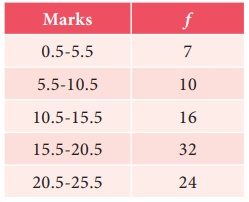 Modal class is 16 -20 since it has the maximum frequency.

4. An Empirical Relationship between Mean, Medan and Mode

We have seen that there is an approximate relation that holds among the three averages discussed earlier, when the frequencies are nearly symmetrically distributed.

In a distribution, the mean and mode are 66 and 60 respectively. Calculate the median.