The Arithmetic Mean of a data is the most commonly used of all averages and is found by adding together all the values and dividing by the number of items.

Then, the mean of his scores (that is the arithmetic average of the scores) is obtained by

In general, if we have n number of observations x1, x2, x3, …, xn then their arithmetic mean denoted by

(read as X bar) is given by

We express this as a formula:

Assumed Mean method: Sometimes we can make calculations easy by working from an entry that we guess to be the right answer. This guessed number is called the assumed mean.

It does not matter which number is chosen as the assumed mean; we need a number that would make our calculations simpler. Perhaps a choice of number that is closer to most of the entries would help; it need not even be in the list given.

We add this ‘mean difference’ to the assumed mean to get the correct mean.

This method will be very helpful when large numbers are involved.

Consider the following list of heights (in cm) of 12 students who are going to take part in an event in the school sports.

How will you find the Mean height?

There are several options.

(i) You can add all the items and divide by the number of items.

(ii) You can use Assumed mean method. Assume, 141 as the assumed mean.

Then the mean will be given by

These details can be neatly tabulated as follows: 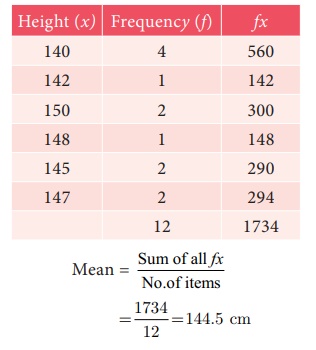 Looking at the procedure in general terms, you can obtain a formula for ready use. If x1, x2, x3, … xn are n observations whose corresponding  frequencies are f1 , f2 , f3 , … fn then the mean is given by

Can you adopt the above method combining with the assumed mean method? Here is an attempt in that direction:

Note: Study each step and understand  the meaning of  each symbol.

(iv) Let the assumed mean be 145. Then we can prepare the following table:

Arithmetic mean = Assumed mean + Average of the sum of deviations

When large numbers are involved, this method could be useful.

When data are grouped in class intervals and presented in the form of a frequency table, we get a frequency distribution like this one:

The above table shows the number of customers in the various age groups. For example, there are 120 customers in the age group 20 – 30, but does not say anything about the age of any individual. (When we form a grouped frequency table the identity of the individual observations is lost). Hence we need a value that represents the particular class interval. Such a value is called mid value (mid-point or class mark) The mid-point or class mark can be found using the formula given below.

In grouped frequency distribution, arithmetic mean may be computed by applying any one of the following methods.

When direct method is used, the formula for finding the arithmetic mean is

The following data gives the number of residents in an area based on their age. Find the average age of the residents. 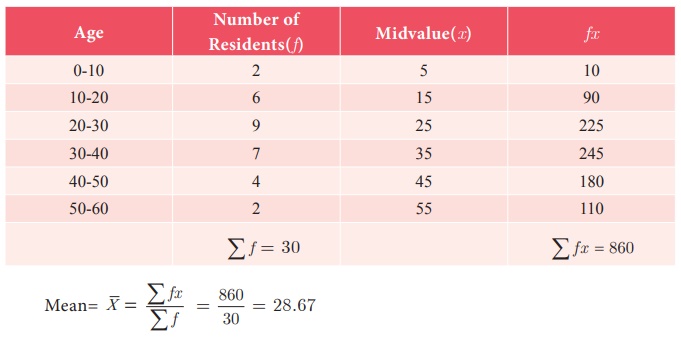 We have seen how to find the arithmetic mean of a grouped data quickly using the direct method formula. However, if the observations are large, finding the products of the observations and their corresponding frequencies, and then adding them is not only difficult and time consuming but also has chances of errors. In such cases, we can use the Assumed Mean Method to find the arithmetic mean of grouped data.

1. Assume any value of the observations as the Mean (A). Preferably, choose the middle value.

2. Calculate the deviation d = x − A for each class

3. Multiply each of the corresponding frequency ‘f ’ with ‘d’ and obtain ∑fd

Find the mean for the following frequency table: 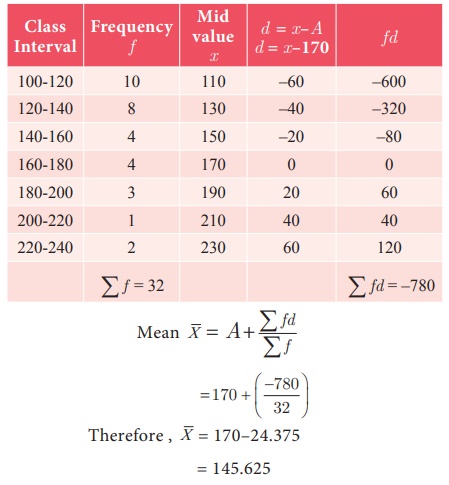 In order to simplify the calculation, we divide the deviation by the width of class intervals (i.e. calculate (x –A) / c) and then multiply by c in the formula for getting the mean of the data. The formula to calculate the Arithmetic Mean is 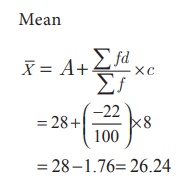 • When xi and fi are small, then Direct Method is the appropriate choice.

• When xi and fi are numerically large numbers, then Assumed Mean Method or Step Deviation Method can be used.

• When class sizes are unequal and d numerically large,we can still use Step Deviation Method.

4. A special property of the Arithmetic Mean

1. The sum of the deviations of the entries from the arithmetic mean is always zero.

Find the sum of the deviations from the arithmetic mean for the following observations:

Deviation of an entry xi from the arithmetic mean

Sum of the deviations

Hence, we conclude that sum of the deviations from the Arithmetic Mean is zero.

If each value is increased by 4, then the mean of new set of values is

If each value is divided by 3, then the mean of new set of values is

If Y is the set of values obtained by dividing each value of X by 3.

The average mark of 25 students was found to be 78.4. Later on, it was found that score of 96 was misread as 69. Find the correct mean of the marks.

Given that the total number of students n = 25,