In any settlement-village or town- change in population occurs due to birth, death and migration. Of these three components of population change, birth and death is clearly identifiable events while migration poses the maximum amount of problem with regards to its definition and measurement.

In any settlement-village or town- change in population occurs due to birth, death and migration. Of these three components of population change, birth and death is clearly identifiable events while migration poses the maximum amount of problem with regards to its definition and measurement. As almost everyone keeps moving most of the time, it is not easy to define which of these moves have to be classified as migratory moves.

In the Census of India, migration is enumerated on two bases

Extent of migration in India and Tamil Nadu

Now, why is there such a large percentage of migration among women? 70 percent in India and 51 percent in Tamil Nadu report marriage as the reason for migration of females in 2011. That is, marriage and the movement associated with marriage appear to be a major factor responsible for women’s mobility in India and Tamil Nadu. Movement related to work and employment appears to be the driving force for migration, among men. Of all the male migrants in India, 28 percent report ‘work’ as the major reason for their migration, in 2011. The corresponding percentage in Tamil Nadu is 26 percent. 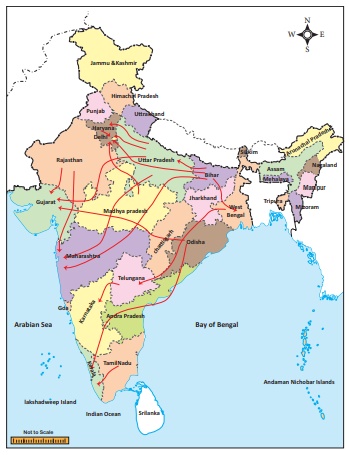 To sum up, in Tamil Nadu, two out of every five persons is reported to be a migrant in the year 2011. Incidence of migrants is higher in rural areas and larger among women. Tamil Nadu has a history of migration and people have moved for various reasons such as trade, business, employment etc, to various countries. During the colonial period, labourers had moved to other colonies seeking work and wages. In the more recent period workers from Tamil Nadu have been moving to countries in the Gulf, United States of America and Australia. In 2015, an independent research study was conducted to understand the level, nature and pattern of migration in Tamil Nadu.

This study has made some interesting findings, as discussed below:

•  Chennai district has recorded the maximum number of emigrants followed by Coimbatore, Ramanathapuram and Tiruchirapalli districts.

This study also provides information about the sex and destination of migrants Tamil Nadu.

•  Of the total migrants who go to foreign countries, nearly 20% have chosen to go to Singapore, while 18% to the United Arab Emirates, 16% to Saudi Arabia, 13 % to the United States of America; and Malaysia, Kuwait, Oman, Qatar, Australia and England are also refered as important destinations for migrants from Tamil Nadu in the year 2015.

On the question of educational qualifications of migrants from Tamil Nadu, the study reveals that in 2015 about 7 % were illiterates; 30 % have completed. Class X; 10 % have completed Class XII; 15 % had undergone vocational training; 11 % were graduates; 12% were professionally qualified and 11 % had Post Graduate degrees.

The extent and nature of migration in any society is basically determined by the nature of the development process experienced by that society. That is, the type and scale of development achieved by the agricultural and industrial sectors in an economy would determine the migratory patterns.

In India and Tamil Nadu, though the agricultural and industrial sectors have grown over the years, inequalities still exist in asset and income distribution. Endemic poverty continues to be a major problem. 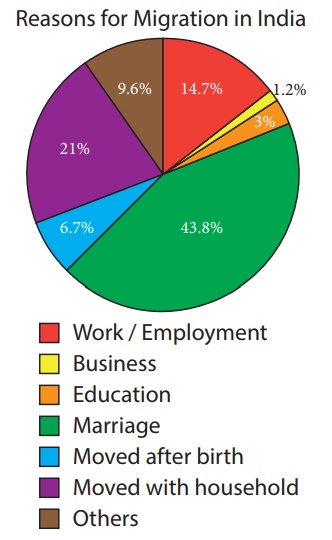 The growth processes have also created spatial inequalities, by leading to enclaves of growth. The migration patterns observed in a developing society such as ours correspond to these inequalities (economic, social, spatial etc) created by the development processes.

Therefore, any migrant stream would consist of heterogeneous sub-streams. For example, if we consider the rural-urban migrant stream, it would comprise of rural rich and the rural poor, each with its own reasons and motivation for migration, the mode of migration, the outcome or consequence of migration etc. Poorer sections of the population migrate as a survival strategy, in response to distressing conditions in rural areas. Migrants from better-off sections migrate to improve their living standards.

Further, spatially, there would be a tendency for migrants to converge on enclaves of growth-either in urban areas or in rural areas.

The pattern of migration is very complex, comprising of a number of streams:

Each of these streams would consist of different types of migrants, (from different social classes) each with its own reason for migration. The extent and nature of these migrant streams would essentially depend on.

• pressures and aspirations experienced by people at the origin of migration

• onstraints imposed on mobility at the origin of migration

• he cost of migration 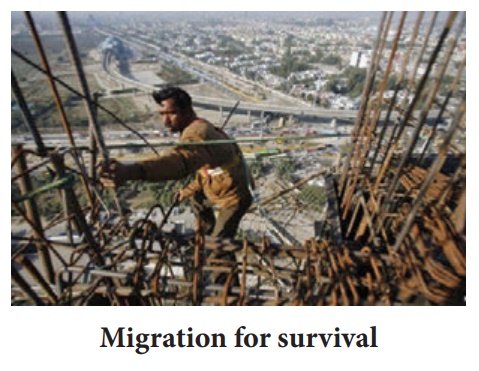 Policies to address the problem of migration in developing countries like India essentially aim at the following:

•  To redirect the migrant streams: Redirection of migrant streams, away from big metropolitan cities is a desirable policy option. This policy can help in reducing spatial inequalities by suitable strategies, such as developing a more dispersed pattern of urbanisation.