Microorganisms in soil interact with themselves and lead to beneficial and harmful relationships.

Microorganisms in soil interact with themselves and lead to beneficial and harmful relationships (Flowchart 10.1). Some of the interaction and interrelationship have been discussed in this connection in Table 10.2. 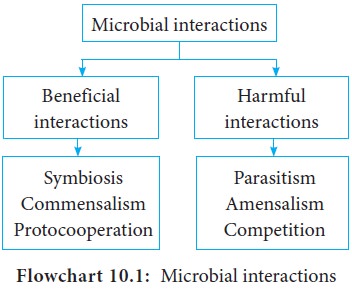 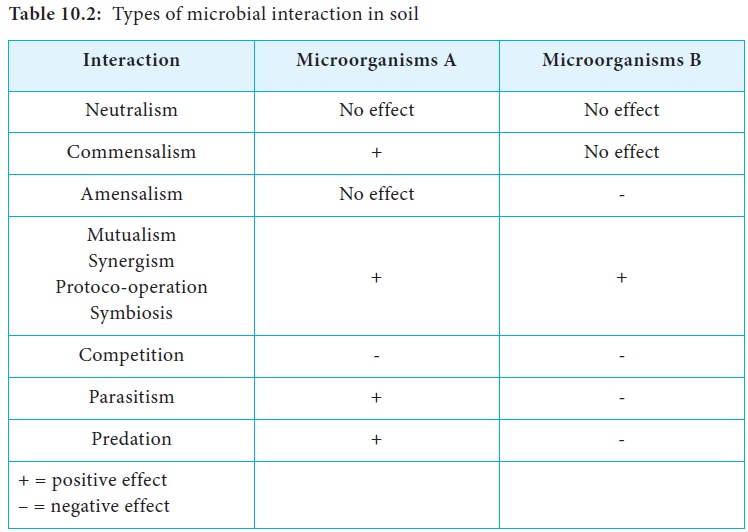 The beneficial interactions such as symbiosis (mutualism) and commensalism are  found  to  operate  among  the  soil inhabitants.

Mutualism is an example of symbiotic relationship in which each organisms benefits from the association. One type of mutualistic association is involving the exchange of nutrients, between two species, a phenomenon called syntrophism. Many microorganisms synthesise vitamins and amino acids in excess of their nutritional requirements. Other have a requirement for one or more of these nutrients. Symbiosis is an obligatory relationship between two populations that benefit both the population. Both populations live together for mutual benefit.

The relationship between algae and fungi that result in the formation of lichen is a classical example of mutualistic intermicrobial relationship (Figure 10.3).

Lichens are composed of primary producer, the phycosymbiont (algae) and a consumer the mycosymbiont (fungus) 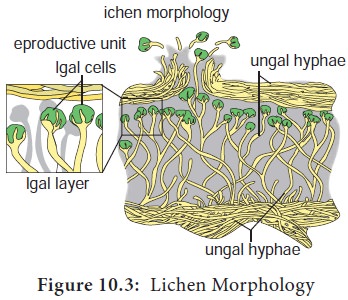 Ammensalism is the phenonmenon where one microbial species is affected by other species, where as other species is unaffected by first one. Ammensalism is accomplished by secretions of inhibitory substances such as antibiotics. Certain organisms may be of great practical importance, since they often produce antibiotics or other inhibitory substances, which affect the normal growth of other organisms. Antagonistic relationships are quite common in nature. For example: Pseudomonas aeruginosa is antagonistic towards Aspergillus terreus (Figure 10.4). 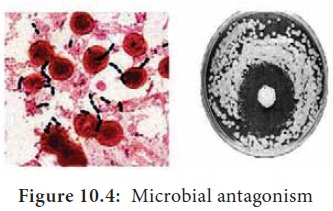 This is a relationship in which one of the population benefits from the other and the host is usually harmed. Parasitism is one of the most complex microbial interactions. The line between parasitism and predation is difficult to define. The parasites feed on the cells, tissues or fluids of another organisms the host, which is harmed in this process.

The parasites depends on the host and lives in intimate physical and metabolic contact with the host. All types of plants and animals are susceptible to attack by microbial parasites.

The rhizospere region can be divided into two zones.

However the root surface is termed as “rhizoplane”.