Microbes and their Types

Microorganisms differ from each other in size, morphology, habitat, metabolism and several other features. Microbes may be unicellular (Bacteria), multicellular (Fungi), acellular (not composed of cells-Virus). Types of microbes include bacteria, viruses, fungi, microscopic algae and protists.

Microbes and their Types

Microorganisms differ from each other in size, morphology, habitat, metabolism and several other features. Microbes may be unicellular (Bacteria), multicellular (Fungi), acellular (not composed of cells-Virus). Types of microbes include bacteria, viruses, fungi, microscopic algae and protists.

Bacteria are microscopic, single celled prokaryotic organisms without nucleus and other cell organelles. Although majority of bacterial species exist as single celled forms, some appear to be filaments of loosely joined cells. The size varies from less than 1 to 10 μm in length and 0.2 to 1 μm micrometer in width. Bacteria may be motile or non-motile. For motility they have special structures called flagella which are found on the cell surfaces. Location of flagella varies with bacterial species.

Based on the arrangement of flagella, there are four types of bacteria:

(iii) Amphitrichous: Either a single or cluster of flagella at both the cell poles. e.g. Aquaspirillum serpens.

(iv) Peritrichous: Flagella arranged along the sides of the bacteria. e.g. Salmonella typhi. 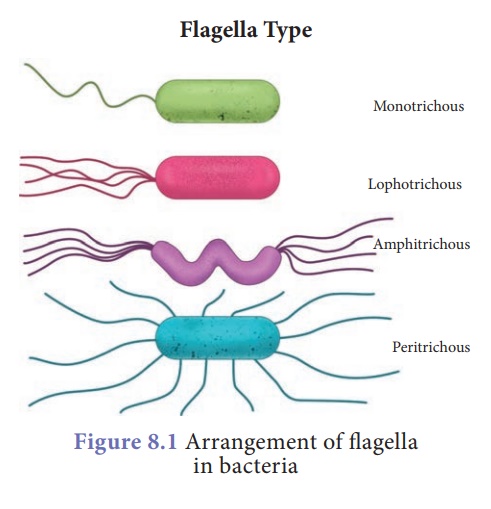 A. Shapes of bacteria

Based on the shapes, bacteria are grouped as:

1. Spherical shaped bacteria called as cocci (or coccus for a single cell).

2. Rod shaped bacteria called as bacilli (or bacillus for a single cell). 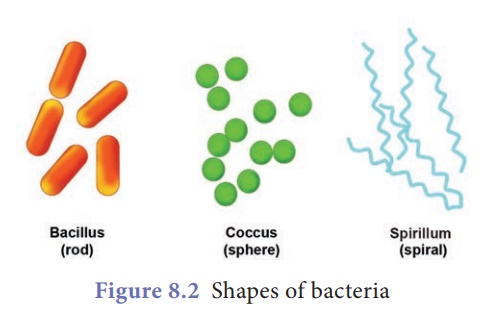 B. Structure of a bacterial cell

Bacterial cell has cell membrane, covered by strong rigid cell wall made up of peptidoglycan. In some bacteria, outside the cell wall there is an additional slimy protective layer called capsule made up of polysaccharides. The plasma membrane encloses the cytoplasm, incipient nucleus (nucleoid), ribosomes and DNA which serve as genetic material. Ribosomes are the site of protein synthesis. They lack membrane bound organelles. In addition to this, a small extra chromosomal circular DNA called plasmid is found in the cytoplasm. 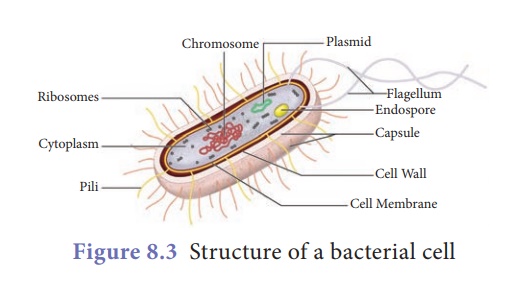 All living organisms require a source of energy. Bacteria have diversified energy requirements. Based on this they are categorized into autotrophic bacteria and heterotrophic bacteria.

They synthesize their own food from inorganic sources (CO2 and hydrogen donor). e.g. Nitrosomonas sp. Autotrophic bacteria are classified into two types based on their source of energy.

·           Chemotrophs that rely on chemical compounds for their energy.

b. Heterotrophic bacteria (Heterotrophs) They are most abundant in nature. They do not synthesize their own food but depend on other organisms or dead organic matter for food. They may be classified as:

·           Parasitic bacteria that live on live hosts like plants, animals and human. They can cause diseases to the living host.

·           Symbiotic bacteria may live inside a live host, where they obtain nutrition and benefit the host in digestion and nitrogen fixing (Rhizobium). 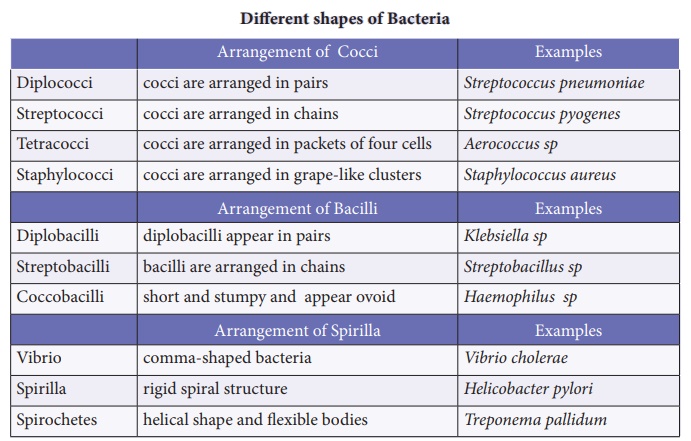 The term ‘virus’ in Latin means ‘venom’ or ‘poisonous fluid’. Viruses are non-cellular, self-replicating parasites. They are made up of a protein that covers a central nucleic acid molecule, either RNA or DNA. The amount of protein varies from 60% to 95% and the rest is nucleic acid. Nucleic acid is either DNA (T4 bacteriophage) or RNA (Tobacco mosaic virus, TMV).

A simple virus particle is often called a virion. They grow and multiply only in living cells. They are the smallest among the infective agents varying over a wide range from 18-400 nm (nanometre). They can live on plants, animals, human being and even bacteria. They can be easily transmitted from one host to another.

A. Living and Non-living characters

B. Types of Viruses

Viruses are categorised as: 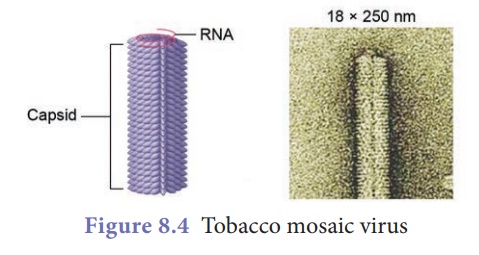 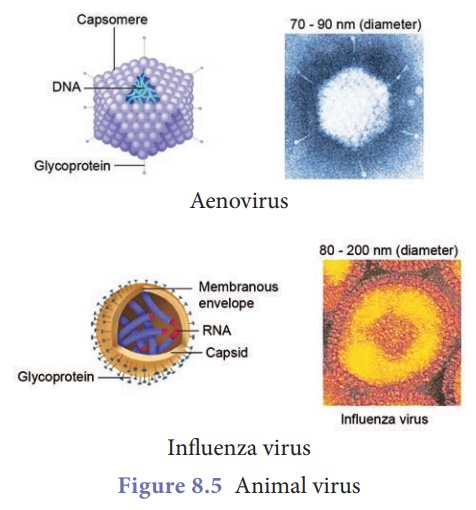 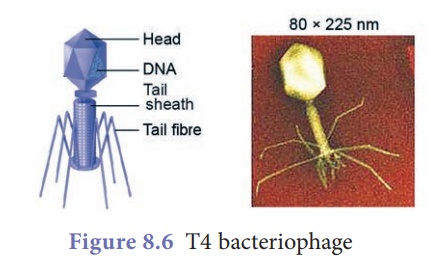 They lack chlorophyll, hence depend on living or dead host for their nutritional needs. Fungi living on living hosts are called parasites, and those living on dead organic matter are called saprophytes. The body of the fungus is called thallus.

In general, fungi are larger than bacteria. Single celled yeast ranges from 1-5 μm in width. They are spherical in shape. Flagella are absent and hence they are non-motile. In the case of multicellular forms, thallus is called mycelium. Mycelium is a complex of several thin filaments called hyphae (singular: Hypha).

Each hypha is 5 to 10 μm wide. They are tube like structures filled with protoplasm and cellular organelles. Hyphae may or may not be intersected with plasmalemma (cell wall). Cell wall is made up of cellulose and hemicellulose. 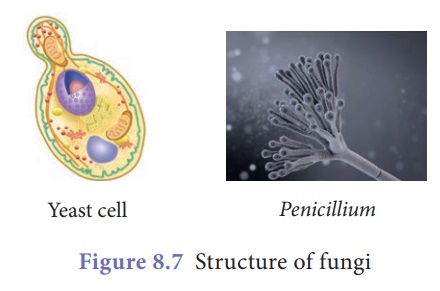 ‘Prion’ means proteinaceous infective particle (‘Protein gone bad’). The term 'prion' was coined by Stanley B. Prusiner in 1982. Prions are viral particles which contain only proteins. They do not contain nucleic acid. They are infectious and smaller than viruses. Prions are found in neurons and are rod shaped. Prions induce changes in normal folded proteins. Misfolded proteins aggregate and accumulate as plaques. This results in the degeneration of nervous tissue. 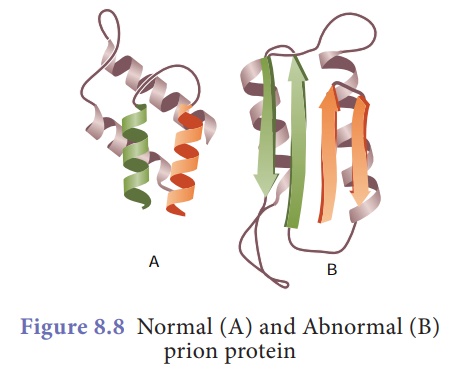