Microorganism s contribute to human welfare in many ways. In this section we will study about the diversified usefulness of microbes.

Microorganism s contribute to human welfare in many ways. In this section we will study about the diversified usefulness of microbes.

Microbes play an important role in agriculture as biocontrol agents and biofertilizers. Microbes play a vital role in the cycling of elements like carbon, nitrogen, oxygen, sulphur and phosphorus.

(i)  Microbes as biocontrol agents Microorganisms used for controlling harmful or pathogenic organisms and pests of plants are called as biocontrol agents (Biopesticides). Bacillus thuringiensis (Bt) is a species of bacteria that produces a protein called as ‘cry’ protein. This protein is toxic to the insect larva and kills them. Spores of B.thuringiensis are available in sachets, which are dissolved in water and sprayed on plants infected with insect larva.

Microorganisms which enrich the soil with nutrients are called as biofertilizers. Bacteria, cyanobacteria and fungi are the main sources of biofertilizers. Nitrogen is one of the main source of plant nutrients. Atmospheric nitrogen has to be converted to available form of nitrogen. This is done by microbes either in free living conditions or by having symbiotic relationship

Microorganisms play an important role in the production of wide variety of valuable products for the welfare of human beings.

·           Production of fermented beverages: Beverages like wine are produced by fermentation of malted cereals and fruits by Saccharomyces cerevisiae.

·           Curing of coffee beans, tea leaves and tobacco leaves: Beans of coffee and cocoa, leaves of tea and tobacco are fermented by the bacteria Bacillus megaterium. This gives the special aroma.

Antibiotics are metabolic products of microorganisms, which in very low concentration are inhibitory or detrimental to other microbes. In 1929, Alexander Fleming produced the first antibiotic pencillin. In human beings antibiotics are used to control infectious diseases like cholera, diptheria, pneumonia, typhoid, etc. 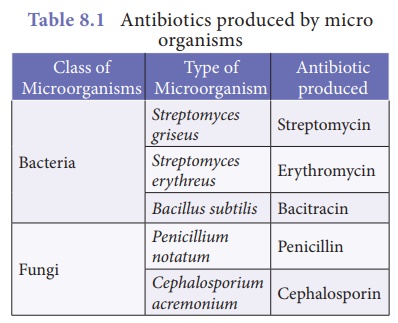 Vaccines are prepared by killing or making the microbes inactive (attenuated). These inactive microbes are unable to cause the disease, but stimulate the body to produce antibodies against the antigen in the microbes. 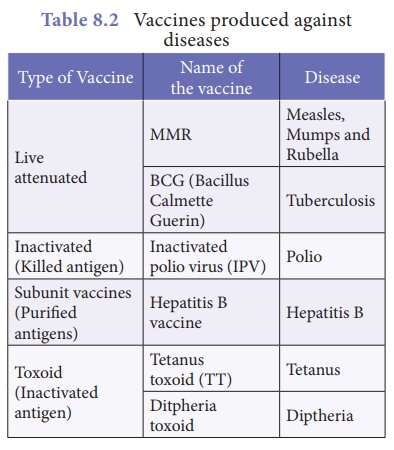