Iron is one of the most essential micro elements in the body. It plays a vital role in many oxidation-reduction reactions. Hemoglobin and cytochromes contain Iron in them.

·     Iron is involved in the transport of oxygen by hemoglobin.

·     Iron is essential for synthesis of cytochromes, a component of electron transport chain.

·     Myoglobin is an iron containing protein similar to hemoglobin and is present in muscle tissue. 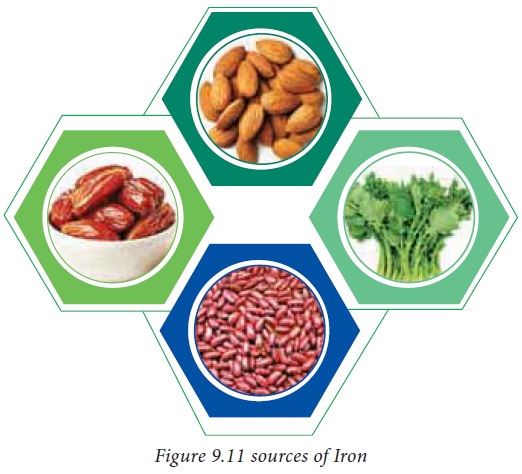 Normally, about 5 to 10% of dietary iron is absorbed by the active transport

process. Most absorption occurs in the duodenum. Infants and children absorb a

twice as much as that of normal children. Excess dietary iron is stored as ferritin.

Only lesser amounts are excreted in the urine, feces and sweat.

·     Impaired iron absorption takes place in patients who have total removal of stomach or a removal of the considerable amount of the intestine.

·     A diet high in phosphate causes decreased absorption due to the formation of insoluble ferric phosphate. 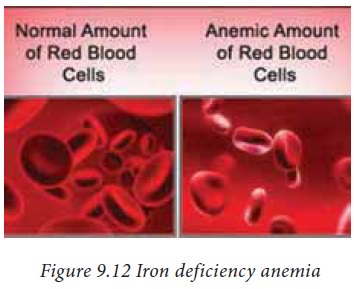 Deficiency of iron causes iron deficiency anemia. The deficiency may be due to dietary or lack of iron absorption due to gastro intestinal tract diseases like diarrhoea.

Copper is an essential micro element. Copper content in an adult human is about 100 mg. Copper in whole blood is almost evenly distributed between cell and plasma. The highest concentrations are found in liver and kidney.

·     Ceruloplasmin a copper containing protein is required for iron absorption.

·     It is also present in cytochrome C, which is involved in electron transport in mitochondria.

·     Copper is also needed for bone formation as well as for the maintenance of myelin within the nervous system. 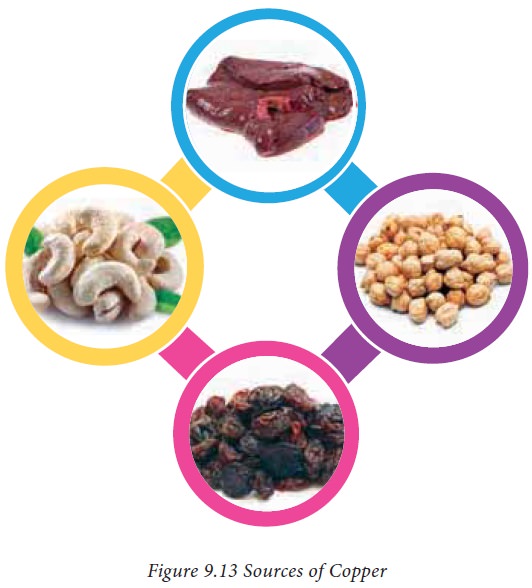 Copper is present in many foods and the best sources are meat, nuts, legumes and cereals.

Absorption of copper into the blood stream occurs via the villi of the small intestine. About 30 percent of the dietary copper is absorbed in the duodenum. Only 10 - 60 μg of copper is excreted in normal urine in 24 hours.

·     A diet deficient in copper causes loss of weight.

·     Copper deficiency turns hair grey, which however, can be controlled by administration of copper.

·     Deficiency of copper is sometimes associated with decrease in taste sensitivity, which is restored by oral administration of copper. 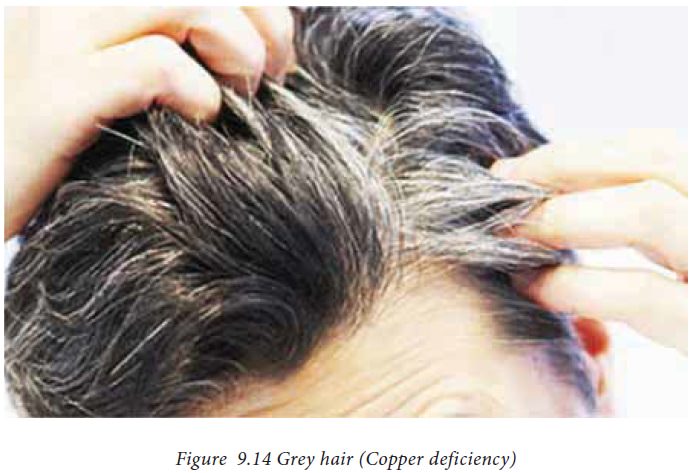 The adult human body contains about 50 mg of organically bound iodine. Nearly half of this is present in muscles. Most of the body iodine is present in the thyroid gland, but all cells contain traces of iodine.

The thyroid gland is chiefly concerned with the uptake of iodine for the synthesis of the thyroid hormones, tetra Iodothyronine(Thyroxin T4) and tri Iodothyronine(T3) which influence a large number of metabolic functions. These iodine containing hormones regulate energy metabolism, synthesis of proteins and cholesterol and also in the conversion of carotene to vitamin A. 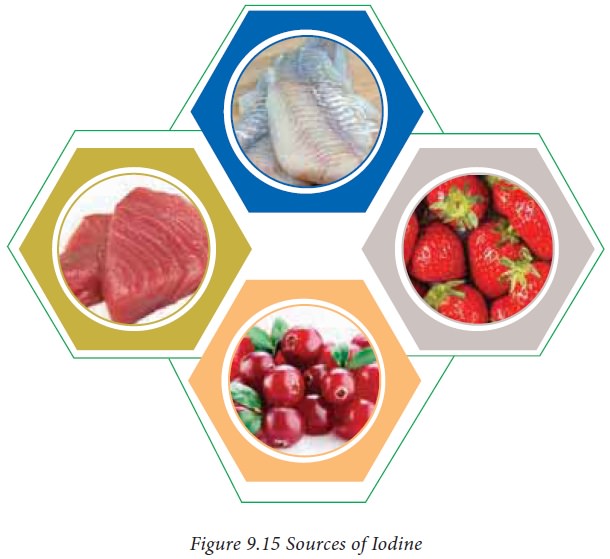 of the iodine of the thyroid gland is in organic combination and stored in the follicular colloids as thyroglobulin.

Inorganic Iodine is mostly excreted by the kidney. Milk of lactating women also contains some iodine.

A deficiency of iodine leads to a decreased production of thyroxine, and in turn a lowered rate of energy metabolism. In an attempt to produce more thyroid hormones the thyroid gland enlarges. This condition is called simple or endemic goiter. 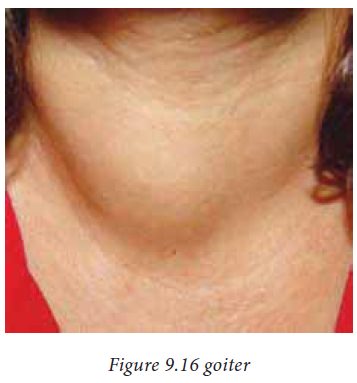 Fluorine exists in the body as compounds called fluorides.It is used as an anti-coagulant during collection of blood for the determination of blood sugar.

·     Fluorine is required in traces for the development of bones and teeth.

·     It is necessary for the prevention of dental caries.

·     It is used in combination with vitamin D for the treatment of osteoporosis.

The body receives fluorine mainly from drinking water, in which concentration varies with soil content. Some sea fish and tea also contain small amounts of fluorine.

Absorption of fluoride is via the  small intestine into the blood stream. Most of the fluorides that are not retained by the bones and teeth are excreted rapidly into the urine. It is also excreted through sweat and intestine.

The absence of fluorine in the diet causes dental caries. 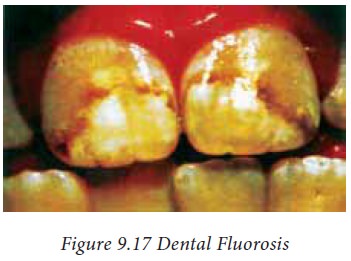 Adult human body contains approximately 1 to 2 grams of zinc. Like iron, zinc is absorbed according to the body needs. Prostate gland is very rich in zinc.

·     Zinc forms an integral part of several metallo- enzymes in the body.

·     Zinc is essential for growth and reproduction.

·     It has role in maintaining the plasma concentration of vitamin A.

·     Zinc is essential for the storage of insulin in the β-islet cells.

·     Zinc is necessary for wound healing.

Fish, meat, liver, egg and certain sea foods are high in zinc. Vegetable sources are cereals, pulses, yeast and wheat germ. Milk including breast milk also is a good source of zinc. The colostrum is an especially rich source. 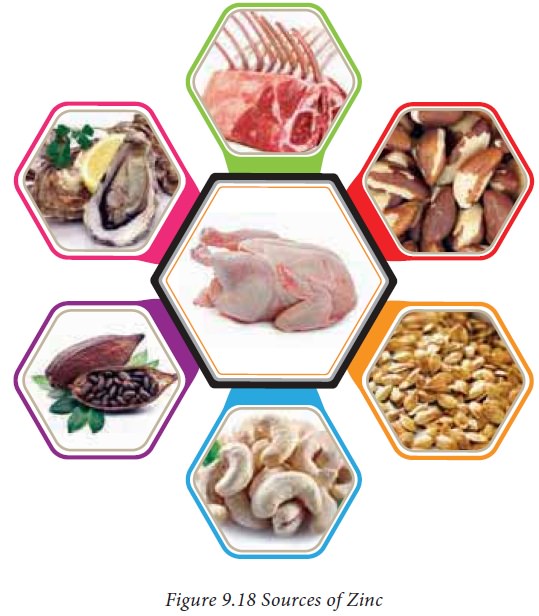 Zinc present in animal foods is well absorbed in the small intestine, especially from the duodenum. Zinc present in plant foods are poorly absorbed due to the presence of phytic acid which interferes with its absorption. Zinc is mostly excreted in urine.

·     In zinc deficiency, there is poor wound healing.

·     Zinc deficiency may result in impairment of sensitivity to taste.

·     Deficiency of zinc may interfere with storage and secretion of insulin. 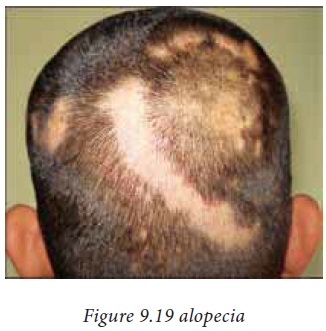 Cobalt is a component of vitamin B12. Elemental cobalt of the diet can be converted to Cobalamine by the intestinal bacteria. Cobalt occurs in small amount in all tissues, higher concentrations occur in liver and kidneys.

Most of the cobalt is present in vitamin B12, which is necessary for maturation of red blood cells.

Cobalt is an activator of the enzyme Phosphoglucomutase and glycyl - glycine peptidase.

Cobalt is absorbed from the small intestine. About 65% of ingested cobalt is excreted in the urine and the remaining in the feces.

Manganese is an essential trace element. It is present as Mn2+ ion and found in high concentrations in the mitochondria.

·     Manganese acts as a cofactor for number of enzymes including arginase, hexokinase and isocitrate dehydrogenase.

·     Manganese is essential for normal bone structure, reproduction and functioning of the central nervous system.

·     Manganese also functions with vitamin K in the formation of prothrombin.

·     It helps in Porphyrin synthesis.

·     Manganese is involved in fatty acid and cholesterol synthesis.

Manganese is universally distributed in plant and animal tissues, nuts, cereals and vegetables. The average diet can provide approximately 3 to 4 mg of manganese.Tea is exceptionally rich in manganese. 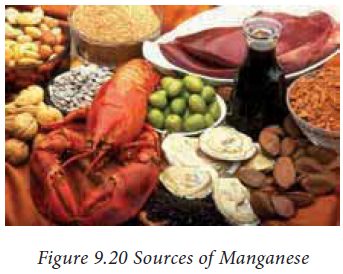 Manganese is readily absorbed in the small intestine. Normally 3 to 4 % of Manganese in diet is absorbed. Large quantity of Manganese is excreted mostly in the feces. Only very small quantities of manganese are excreted in the urine.

Manganese absorption is inhibited by iron.

A deficiency of Mn reduces appreciably the synthesis of oligosaccharides.

The deficiency of Manganese leads to impaired growth and skeletal abnormalities.

Chromium is widely distributed throughout the body. The adult human body contains only 6 mg of chromium.

·     Chromium accelerates the utilization of glucose.

·     Chromium is also said to be important in the metabolism of plasma lipoproteins.

Chromium is highly available in  average  diets. Significant  amount of chromium is obtained in the diet by cooking foods in steel containers.

It is absorbed in the small intestine.

Chromium is mainly excreted in urine.

·     Molybdenum is required for the function of metallo-enzyme xanthine oxidase.

·     Presence of small amount of molybdenum helps in the utilization of copper.

Molybdenum is available in normal diets. Liver and kidney are good animal sources. Whole grains and legumes are vegetable sources. 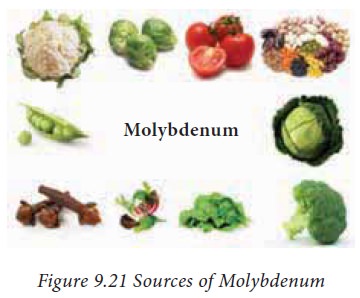 About 50 - 70 % of the ingested Molybdenum is readily absorbed in the small intestine. About half of the absorbed molybdenum is excreted in urine.

Selenium is an essential trace element for all species including humans.

·     Selenium is essential for normal growth and fertility.

·     Selenium is a component of the enzyme which reduces oxidized glutathione.

·     It is involved in immune mechanism and synthesis of ATP.

·     Vitamin E and Selenium prevent peroxidative damage to cellular and sub-cellular organelles and chiefly the membrane.

·     Selenium may be a cancer protective agent.

·     Supplements of selenium probably protect against toxic effects of heavy metals like mercury and silver.

Selenium is largely present in different foods. Selenium is present in foods of plant origin grown in selenium rich soils. Any normal diet can meet the daily requirement of selenium.

The   principal dietary forms of selenium, selenocysteine and selenomethionine are absorbed from  gastrointestinal tract. Selenium homeostasis is achieved by removal of excess selenium in urine. 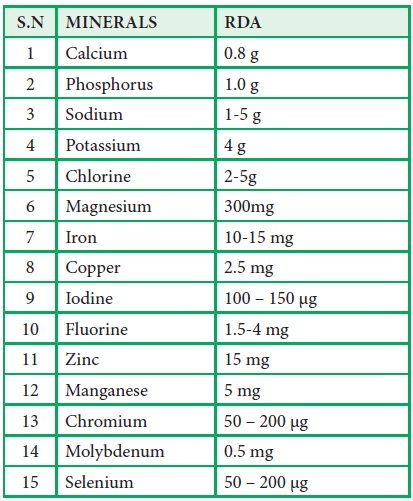 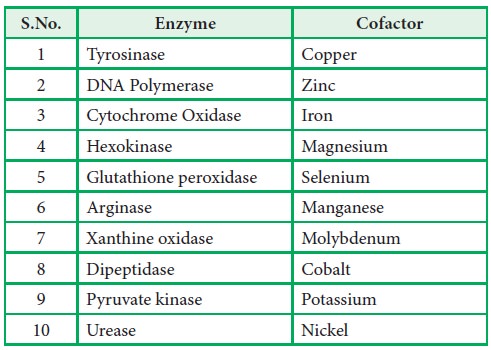