Some of the macro elements are calcium, phosphorus, sodium, potassium, chloride, magnesium and sulphur.

Some of the macro elements are calcium, phosphorus, sodium, potassium, chloride, magnesium and sulphur.

·     Calcium (Ca) is the most abundant inorganic mineral in the body. About 99% of it exists in the bone and teeth and 1% in soft tissues and extracellular fluid. Functions:

·     Calcium plays a role in blood coagulation by producing substances for thromboplastic activity of blood.

·     Calcium is essential for bone and teeth formation.

·     Calcium ions are necessary for nerve transmission and muscle contraction.

·     Calcium is involved in the process of mitosis.

·     It also acts as cofactor for certain enzymes like succinate dehydrogenase.

·     Calcium plays a role as secondary messenger in hormone action.

·     Calcium is involved in the process of membrane fusion in endocytosis and exocytosis.

·     It involves in maintenance of plasma membrane potential.

·     Calcium binds trypsin near its active site to prevent autodigestion of trypsin. 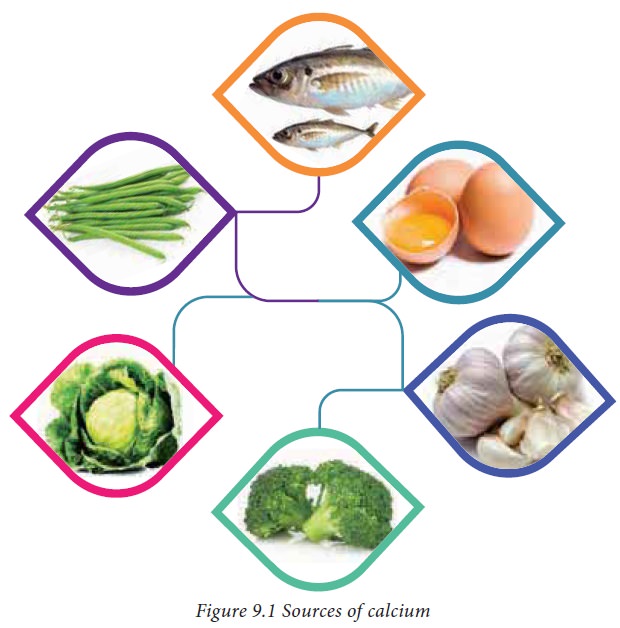 Dairy products remain one of the most important dietary sources of calcium. Other sources include egg-yolk, beans and cabbage.

Calcium is taken in the diet as calcium salts of phosphate, carbonate, tartrate and oxalate. Calcium is actively absorbed in the upper small intestine.

Many factors are said to influence the absorption of the calcium in the intestine.

2.  Protein: A high protein diet favours the absorption of calcium.

5.  Lactic acid: Lactic acid produced by microbial fermentation of sugars in the gut,increases the solubility of calcium salts, and increases their absorption.

8.  Phosphates: Excess of phosphate in diet lowers the calcium absorption. The ratio of calcium and phosphorus in the diet should be 1:1 for optimal absorption of calcium.

The excretion of calcium is partly through the kidneys but mostly via small intestine.

Small amount of calcium may also be lost in sweat.

Osteoporosis is characterized by demineralization of bones (bone resorption) resulting in progressive loss of bone density.

Tetany is a condition characterized by neuromuscular irritability and convulsion, which is associated with a state of hypocalcaemia. 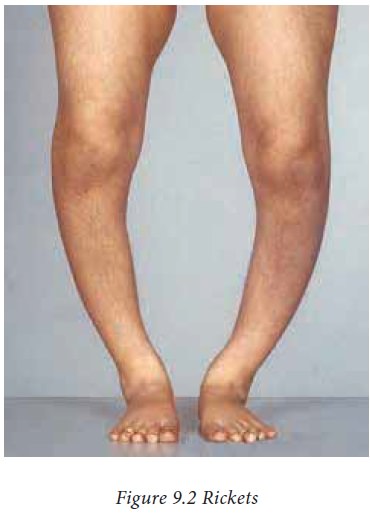 Phosphorus is the principal anion of the cell. It is widely present as phosphates in proteins, nucleic acids and other various cellular components.Phosphorus and calcium are related in sources and metabolism.

·     Phosphorus is essential for formation of bones and teeth.

·     High-energy phosphate compounds like ATP (Adenosine Tri Phosphate) and Creatine Phosphate play a role in storage and transport of energy.

·     Acid-base balance is maintained by phosphate buffer in the kidneys.

·     Several co-enzymes such as NADP+ and TPP involved in enzymatic reactions contain phosphate. 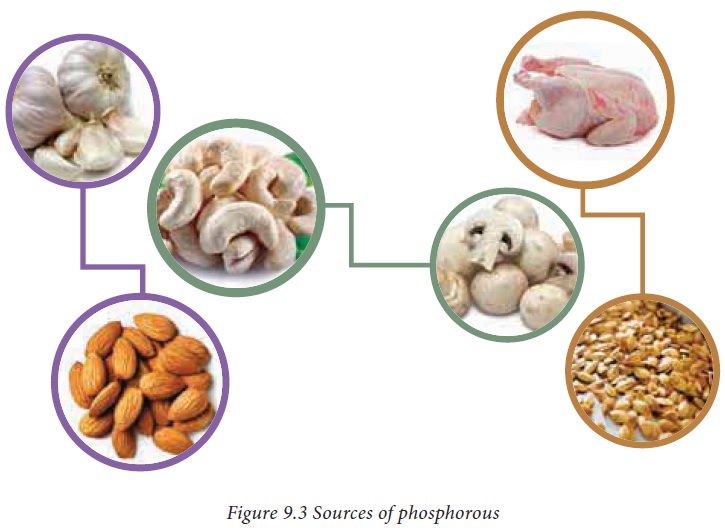 Phosphates are mainly excreted by the kidneys as sodium dihydrogen phosphate through urine.

Deficiency states for phosphorus are rare. Rickets, osteomalacia and osteoporosis are important dietary deficiency disorders of calcium and phosphorus. Low level of blood phosphorus is characterized by defective bone and teeth formation. 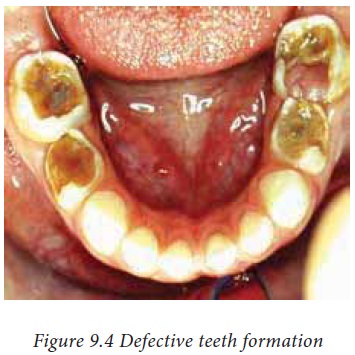 Sodium is the predominant cation of the extra cellular fluid. It is taken in the diet as sodium chloride.

·     Sodium ion is mainly associated with chloride and bicarbonate in the regulation of acid-base equilibrium.

·     It maintains osmotic pressure of the body fluids and thus protects the body against excessive fluid loss.

·     Sodium ions are involved in the transmission of nerve impulses.

·     It plays an important role in the absorption of glucose and nutrients from small intestine by active transport. 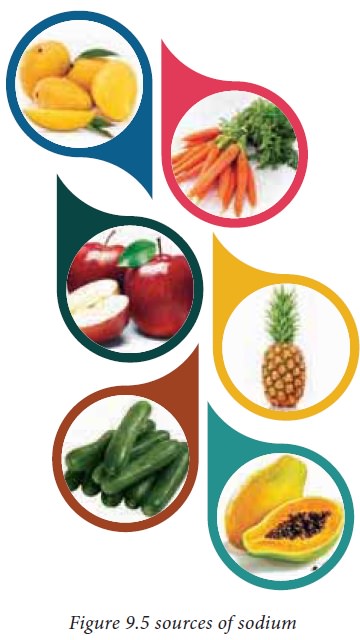 Sodium is widely distributed in animal sources than plants. However, major source is common salt used in cooking. Cauliflowers, carrot and milk are also good sources of sodium.

Sodium is completely absorbed from the gastro intestinal tract by active transport. Normal diet contains about 5-10 grams of sodium as sodium chloride. The same amount of sodium is excreted daily through urine and sweat.

Mineralocorticosteroids secreted by adrenal glands, regulate the metabolism of sodium. Decreased level of plasma sodium(hyponatremia) may be due to lack of aldosterone and loss from gastro-intestinal tract associated with conditions like diarrhoea.

Potassium is the main intracellular cation, about 98% of potassium is present inside the cell.

Many functions of potassium and sodium are carried out in co-ordination with each other.

·     Potassium, along with sodium influences neuromuscular activity of cardiac and skeletal muscles.

·     It maintains the alkalinity of the bile and blood.

·     Protein synthesis is dependent on potassium levels inside the cells. 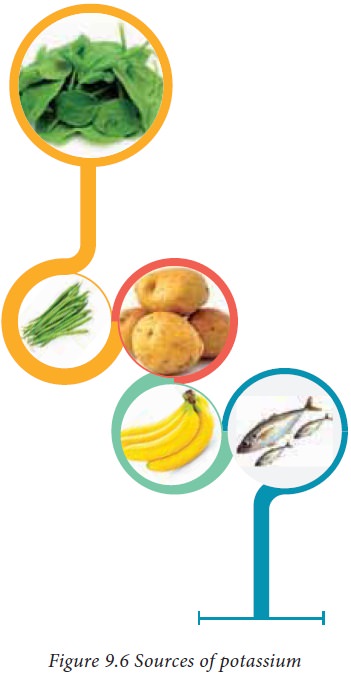 Potassium is absorbed readily by passive diffusion from gastro intestinal tract and it is mainly excreted in the urine.

Deficiency of potassium leads to depression in cardiac and nervous system. Severe vomiting, diarrhoea, loss of appetite, fasting or starvation over a long period of time may lead to deficiency of potassium. It also occurs during renal failure and shock. Fatigue, growth retardation, muscular weakness, heart and respiratory dysfunction are common signs of potassium deficiency. 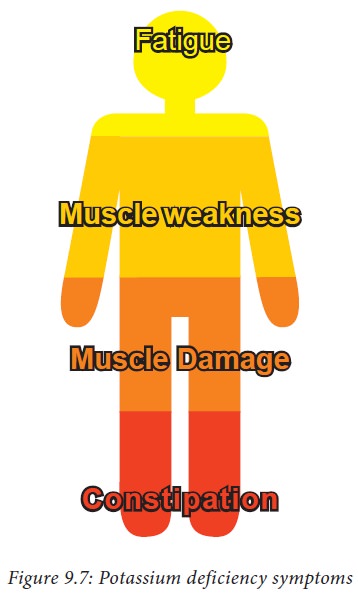 Chlorine is taken in diet as sodium chloride. Chloride is the major anion in the extracellular fluid.

·     Chloride ion is important as an activator of salivary amylase.

·     Chloride mainly acts as a counter ion against cations in maintaining the electrical neutrality in body fluids.

Table salt (Sodium chloride) is the main source of chloride.

Chloride is completely absorbed from the gastro intestinal tract. Chloride is mainly eliminated in the urine and also in the sweat.

Deficiency states of chloride are rare. Most often, sodium and chloride are associated with each other in their functions. Any clinical condition like dehydration, affecting sodium concentration has an identical effect on chloride concentration.

Magnesium is the second most abundant intracellular cation after potassium. Adult human body contains about 25g of magnesium. Bones contain nearly 70% of the body magnesium contributing as magnesium phosphate, which is about 1.5% of bone matter.

·     Magnesium, along with sodium, potassium and calcium controls the neuro muscular irritability.

·     Magnesium is involved in the synthesis of proteins and nucleic acids.

·     Magnesium is essential for the activity of peptidases and ribonucleases.

·     It is an activator of many glycolytic enzymes, particularly in muscle.

·     It plays an important role in oxidative phosphorylation.

Magnesium is widely distributed in vegetables and also found in all animal tissues.

As magnesium is an essential part of chlorophyll, green vegetables are important sources.

·     Excess of calcium decreases the absorption of magnesium. 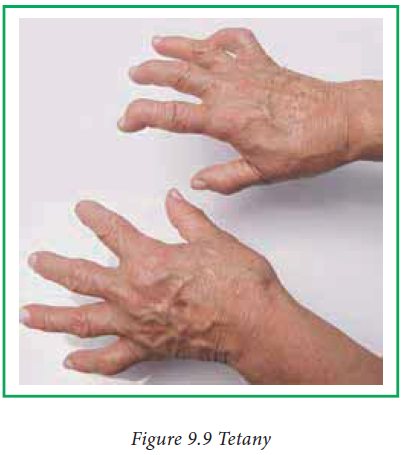 Sulphur is present in our body as sulphur containing amino acids such as methionine and cysteine and also as sulphate. B-complex vitamins like Thiamine and biotin contain sulphur.

·     S-Adenosylmethionine(SAM) acts as a methyl group donor for certain enzymes.

·     Sulphur containing amino acids are responsible for structural maintenance of proteins like insulin and keratin.

·     It is present in compounds like acetyl CoA and succinyl CoA which are needed for various reactions.

·     Glutathione is a valuable sulphur containing Tripeptide needed for the detoxification of H2O2.

·     Sulphur is present in heteropolysaccharides like heparin, a natural anti-coagulant.

Sulphur intake is mainly in the form of cysteine and methionine present in protein. 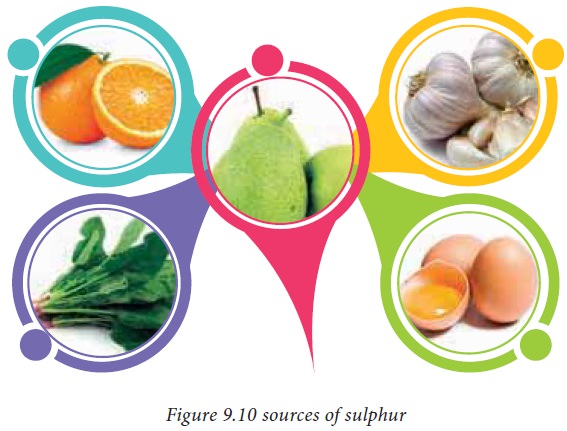 Inorganic sulphate (SO42–) is absorbed as such from the intestine into the portal circulation. Sulphur is excreted in the urine.

Specific sulphur deficiency state has not been reported in human beings.