Mechanisms in Pathogenesis of Autoimmunity

The following mechanisms have been proposed for pathogen-esis of autoimmunity:

The following mechanisms have been proposed for pathogen-esis of autoimmunity:

Certain tissues, such as sperm, central nervous system, and the lens and uveal system of the eye, are sequestrated or hid-den. These sites are normally never exposed to the immune system for various reasons. These are called immunologically privileged sites. When these hidden or sequestrated antigens are released, exposed to as a result of injury, the host immune system—both cellular and humoral—does not consider them as self but as foreign, and hence attacks them. For example, lens protein is enclosed within its capsule and has no contact with circulation. Therefore, immunological tolerance against lens protein is not developed during fetal life. Following injury or cataract surgery, when this antigen is leaked into circulation, it elicits an immune response, which results in damage to the lens of other eye.

Similarly, developing sperms are found within the lumen of the testicular tubules, which are sealed off early in embryonic development, prior to the development of the immune sys-tem. These developing sperms are enclosed within a sheath of tightly joined Sertoli cells, hence are never accessed to immune cells. If these are exposed by surgery or vasectomy and injury, an immune response occurs against the sperm, producing aspermatogenesis that may lead to male sterility.

DNA, histones, and mitochondrial enzymes are the intra-cellular antigens that are normally sequestrated from the immune system. However, certain viral or bacterial infections and exposure to radiation and chemicals can damage these cells and release sequestrated intracellular antigens into circu-lation. These antigens then elicit a strong immune response. The autoantibodies are produced against these antigens, which combine with subsequently released sequestrated antigens. This results in the formation of immune complexes, which causes damage to tissues. For example, following an infection by mumps, the virus causes damage to the basement mem-brane of seminiferous tubules, thereby eliciting an immune response and resulting in orchitis.

Certain physical, chemical, or biological factors may alter tis-sue antigens, resulting in formation of new cell surface anti-gens called neoantigens. These neoantigens are no longer recognized as self, therefore, appear foreign to immune system, thereby eliciting an immune response. Procainamide-induced SLE is an example of an autoimmune disease caused by this mechanism.

Epitope spreading is the term used to describe the new expo-sure of sequestrated autoantigens as a result of damage to cells caused by viral infections. It is another process that is believed to contribute to pathogenesis of autoimmunity. These newly exposed autoantigens or epitopes stimulate autoreactive 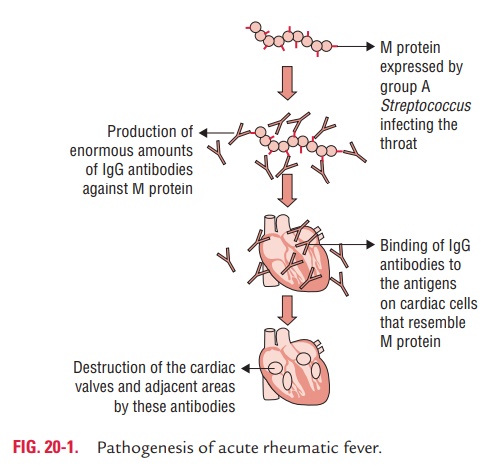 T cells, resulting in autoimmune diseases. For example, in experimental animal infection, a multiple sclerosis-like disease is caused by an infection with an encephalomyelitis virus. In this condition, the self-reactive T cells are directed against cel-lular antigens but not against the virus that cause the sclerosis-like disease.

Molecular mimicry is a process in which infection by particular microbial pathogen is associated with the subsequent develop-ment of specific autoimmune diseases.