These are diseases in which autoantibodies are produced tar-geting only the tissue of a single organ, thus affecting it solely. A few examples of such disorders are Addison’s disease, auto-immune hemolytic anemia, Goodpasture’s syndrome, Graves’ disease, Hashimoto’s thyroiditis, idiopathic thrombocytopenic purpura, insulin-dependent diabetes mellitus, myasthenia gra-vis, pernicious anemia, poststreptococcal glomerulonephritis, etc. These diseases can be further subgrouped on the basis of tissue damage as: (a) diseases mediated by the action of cell-mediated immunity and (b) diseases mediated by the action of autoantibodies.

◗ Diseases mediated by the action of cell-mediated immunity

Some of the diseases where the main mechanism of cell damage is directly mediated by lymphocytes are listed below:

Hashimoto’s thyroiditis: Hashimoto’s thyroiditis primarilyis a subclinical disease in which no thyroid dysfunction is evi-dent and no therapy is needed until the later stages of disease. A cell-mediated autoimmune reaction triggered by unknown factors is believed to be responsible for the development of this disease. The disease occurs most often in middle-aged women producing both autoantibodies and TH1 cells specific for thy-roid antigens. It is the most common form of thyroiditis, and it usually has a chronic evolution. It occurs most commonly during the third to fifth decades, with a female to male ratio of 10:1. The disease is functionally characterized by a slow pro-gression to hypothyroidism with an insidious onset of symp-toms. Most patients become hypothyroid with symptoms of malaise, fatigue, cold intolerance, and constipation. The diag-nosis is usually confirmed by the detection of antithyroglobu-lin antibodies.

Addison’s disease (chronic primary hypoadrenalism): Thisdisease can either be caused by exogenous agents (e.g., infec-tion of the adrenals by Mycobacterium tuberculosis) or may be idiopathic. The idiopathic form is believed to have an immune basis, since 50% of patients have been found to have autoanti-bodies to the microsomes of adrenal cells (as compared to 5% in the general population). The autoantibodies directed against the adrenals are believed to play the main role in pathogenesis of the disease.

Symptoms of Addison’s disease include weakness, fatigabil-ity, anorexia, nausea, vomiting, weight loss, and diarrhea. Signs include increased skin pigmentation, vascular collapse, and hypotension. The disease finally ends in atrophy and loss of function of the adrenal cortex. The diagnosis is confirmed by demonstration of antiadrenal antibodies by indirect immuno-fluorescence test. Addison’s disease is found frequently in asso-ciation with other autoimmune diseases, such as thyroiditis, pernicious anemia, and diabetes mellitus.

◗ Diseases mediated by the action of autoantibodies

In some autoimmune diseases, antibodies act as agonists, binding to hormone receptors in lieu of the normal ligand and stimulating inappropriate activity. This usually leads to an overproduction of mediators or an increase in cell growth. Conversely, autoantibodies may act as antagonists, binding hormone receptors but blocking receptor function. This gen-erally causes impaired secretion of mediators and gradual atrophy of the affected organ. Some important representative disorders in this group are mentioned below:

Myasthenia gravis: Myasthenia gravis is the prototype auto-immune disease mediated by blocking antibodies. It is a disor-der of neuromuscular transmission. A patient with this disease produces autoantibodies that bind the acetylcholine receptors on the motor end-plates of muscles. These antibodies block the normal binding of acetylcholine and also induce comple-ment-mediated lysis of the cells. Increased muscular fatigue and weakness, especially becoming more pronounced follow-ing exercise, are the usual symptoms of myasthenia gravis. Weakness is usually first detected in extraocular muscles result-ing in diplopia or ptosis. The face, tongue, and upper extremi-ties are also frequently involved. Skeletal muscle involvement is usually proximal. The disease is usually marked by spontane-ous remission periods. Thymic abnormalities are frequent in myasthenia gravis. About 10% of the patients develop malig-nant tumors of the thymus (thymomas). The diagnosis is con-firmed by the finding of antiacetylcholine receptor antibodies.

The TSH receptor antibodies (also known as long-acting thyroid stimulator, thyroid-stimulating immunoglobulin, and thyroid-stimulating antibodies) stimulate the activity of thyroid gland in Graves’ disease. These antibodies have the capacity to stimulate the production of thyroid hormones by activating the adenylate cyclase system after binding to the TSH receptor. These antibodies are detected in 80–90% of patients with Graves’ disease and are usually of the IgG isotype.

Protruding eyeballs, also known as exophthalmos, is the classical presentation of the condition. Other symptoms of hyperthyroidism include increased metabolic rate with weight loss, nervousness, weakness, sweating, heat intol-erance, and loose stools. This disease is more prevalent in women in their 30s.

The autoantibodies are produced against a wide range of host tissues in systemic autoimmune diseases. These diseases reflect a general defect in immune regulation that results in hyperac-tive T cells and B cells. Tissue damage is widespread, much more generalized and usually leads to multisystem disorders. Tissue damage is caused by cell-mediated immune responses, by auto-antibodies, or by accumulation of immune complexes. A few of the representative systemic diseases are discussed below:

Systemic lupus erythematosus (SLE) is a generalized autoim-mune disorder associated with multiple cellular and humoral immune abnormalities and protean clinical manifestations. It is most common in females of childbearing age. It is 10 times more common in females than males. The clinical manifesta-tions of SLE vary among different patients. The kind of organ (vital versus nonvital) that becomes involved determines the seriousness and the overall prognosis of the disease. A wide range of autoantibodies to a vast range of tissue antigens, such as DNA, histones, RBCs, platelets, leukocytes, and clotting fac-tors are produced in patients with SLE. Combination of these autoantibodies with their specific antigens produces a variety of symptoms.

Demonstration of lupus erythematosus (LE) cell on incuba-tion of normal neutrophils with damaged leukocytes preincu-bated with sera obtained from SLE patients is typical of SLE. The cell is a peculiar-looking polymorphonuclear leukocyte that has ingested nuclear material.

Laboratory diagnosis of SLE is made by demonstration of antinuclear antibodies (ANAs) in a variety of tissues and cell lines as substrates by an indirect immunofluorescence test. Demonstration of nuclear fluorescence after incubating the cells with the patient’s serum indicates a positive test. Four pat-terns of fluorescence can be seen, indicating different types of ANAs. The test for ANAs is not very specific but is very sensi-tive. A negative result virtually excludes the diagnosis of SLE (95% of patients with SLE are ANA positive), while high titers are strongly suggestive of SLE but not confirmatory. False positives can occur in other systemic autoimmune/collagen diseases and chronic infections.

Anti-dsDNA antibodies are found almost exclusively in SLE (60–70% of the patients). Levels of serum anti-DNA anti-bodies may vary with disease activity, but they are poor pre-dictors of disease activity. Marked elevations in the levels of circulating immune complexes can be detected in patients with SLE sera during acute episodes of the disease by a variety of techniques.

Sunlight exposure is the first environmental factor to be identified that influences the clinical evolution of SLE in a patient. Exposure to sunlight may precede the clinical expression of the disease or disease relapse. This is due to the Langerhans cells of the skin and keratinocytes that release sig-nificant amounts of interleukin-1 upon exposure to UV light. Infections and also drugs are responsible for setting off the disease process in certain susceptible individuals. Treatment of the condition is carried out by administration of corticoste-roids and other anti-inflammatory drugs. Other examples of systemic autoimmune diseases include multiple sclerosis and rheumatoid arthritis.

The risk for many autoimmune diseases appears to be associ-ated with the presence of particular human leukocyte antigen (HLA) genes. Some autoimmune diseases have increased fre-quencies in persons carrying certain HLA genes. Table 20-2 summarizes MHC association with some important autoim-mune diseases. 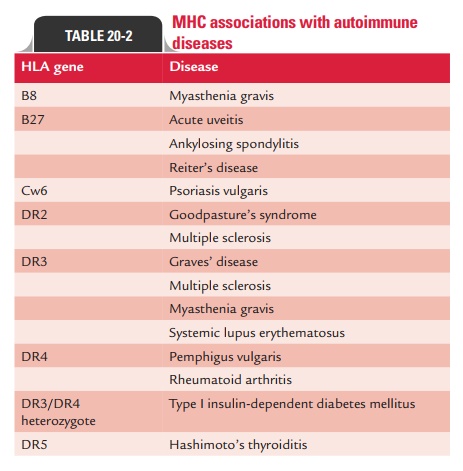