Measures for Promotion of Sustainable Development

Which countries are achieving the UN Sustainable Development Goals fastest?

Measures for Promotion of Sustainable Development

As discussed earlier, the United Nations 17 Sustainable Development Goals and 169 targets are part of the 2030 Agenda for Sustainable Development adopted by 193 Member States at the UN General Assembly Summit in September 2015, and which came into effect on 1 January 2016. These goals are the result of international consultations that brought national governments and millions of citizens from across the globe together to negotiate and adopt the global path to sustainable development for the next 15 year.

The SDGs and targets will stimulate action in the following critically important areas: poverty, hunger, education, health and well-being, education, gender equality, water and sanitation, energy, economic growth and decent work, infrastructure, industry and innovation, reducing inequalities, sustainable cities, consumption and production, climate action, ecosystems, peace and justice, and partnership. This agenda recognises that it is not enough to focus on economic growth alone but in creating more equal societies, and a safer and more prosperous planet. 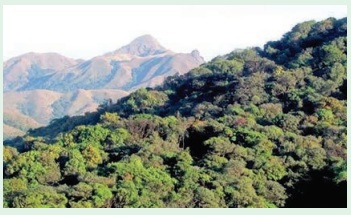 Baripada, a small hamlet straddling the Maharashtra-Gujarat border, is a collective tribal wisdom which has taken it to the next level. With a population of barely 1,000, the village has not only helped conserve their forest but also meet the United Nations’ sustainable development goals, benefiting everyone in the process.

The villagers conserved the forest. And, forest helped in conservation of water. Water enabled agriculture and farming. Farming brought prosperity, which in turn helped improve literacy. And, literacy broadened horizons and led us to total transformation.

Having developed dairy and poultry over the years, the villagers have also evolved a system for marketing their products. This ensured a steady flow of revenue and kept poverty at bay. The villagers share their common land with landless families to ensure ‘zero hunger’ and ‘reduction of inequality’.

Besides, the villagers are game for any experiments involving water, land, forest conservations, biodiversity registration, biogas, solar power, building basic infrastructure through public participation. “Decisions on prohibition, tree plantation were made at the village meeting and immediately implemented. But, to restrict entry of humans and animals in the 445 hectares of village forest was a major task”.

Which countries are achieving the UN Sustainable Development Goals fastest?

The ultimate aim of the Sustainable Development Goals is to end poverty, protect the planet and ensure prosperity for everyone. Each goal has specific targets that need to be met by 2030.

So how close are countries to meeting them? To find out, non- profit organization Bertelsmann Stiftung and the UN Sustainable Development Solutions Network have created a prototype index that measures their performance.

Sweden leads the list, followed by Denmark and Finland. Among the G7 countries, only Germany and France can be found among the top ten performers. The United States ranks 42nd on the Index, while Russia and China rank 62nd and 71st respectively. Also in the top 20 were Canada (13th), the Czech Republic (15th) and Slovenia (17th). Asia-Pacific’s top performers Japan, Singapore and Australia rounded off the list at 18th, 19th and 20th, respectively. The SDG Index underlines that despite achieving high percentages, all countries still have their work cut out to close the remaining gap.

India ranks 116 out of 157 nations on a global index that assesses the performance of countries towards achieving the ambitious sustainable development goals (SDGs).