Contemporary accounts by Greek historians show that Chandragupta was a youth living in Taxila when Alexander invaded India. 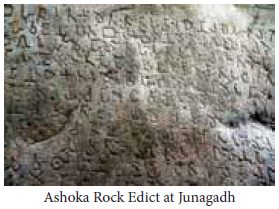 We know from the Junagadh rock inscription (referred to earlier) that Chandragupta had expanded his empire westward as far as Gujarat. One of his great achievements, according to local accounts, was that he waged war against the Greek prefects (military officials) left behind by Alexander and destroyed them, so that the way was cleared to carry out his ambitious plan of expanding the territories. Another major event of his reign was the war against Seleucus, who was one of Alexander’s generals. After the death of Alexander, Seleucus had established his kingdom extending up to Punjab. Chandragupta defeated him in a battle some time before 301 BCE and drove him out of the Punjab region. The final agreement between the two was probably not too acrimonious, since Chandragupta gave Seleucus 500 war elephants, and Seleucus sent an ambassador to Chandragupta’s court. This ambassador was Megasthenes, and we owe much of the information that we have about Chandragupta to Indica, the account written by Megasthenes. The original of this work is lost, but many Greek historians had reproduced parts of his account describing the court of Chandragupta and his administration.

Chandragupta was obviously a great ruler who had to reinvent a strong administrative apparatus to govern his extensive kingdom. (The system of governance and polity is discussed in the next section.) Chandragupta was ably advised and aided by Chanakya, known for political manoeuvring, in governing his empire. Contemporary Jain and Buddhist texts hardly have any mention of Chanakya. But popular oral tradition ascribes the greatness of Chandragupta and his reign to the wisdom and genius of Chanakya. Chanakya, also known as Kautilya and Vishnugupta, was a Brahmin and a sworn adversary of the Nandas. He is credited with having devised the strategy for overthrowing the Nandas and helping Chandragupta to become the emperor of Magadha. He is celebrated as the author of the Arthasastra, a treatise on political strategy and governance. His intrigues and brilliant strategy to subvert the intended invasion of Magadha is the theme of the play, Mudrarakshasa. 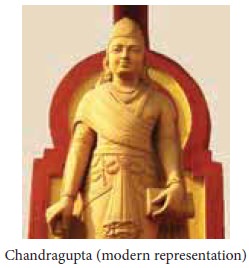 Chandragupta’s son Bindusara succeeded him as emperor in 297 BCE in a peaceful and natural transition. We do not know what happened to Chandragupta. He probably renounced the world. According to the Jain tradition, Chandragupta spent his last years as an ascetic in Chandragiri, near Sravanabelagola, in Karnataka. Bindusara was clearly a capable ruler and continued his father’s tradition of close interaction with the Greek states of West Asia. He continued to be advised by Chanakya and other capable ministers. His sons were appointed as viceroys of the different provinces of the empire. We do not know much about his military exploits, but the empire passed intact to his son, Ashoka.

Bindusara ruled for 25 years, and he must have died in 272 BCE. Ashoka was not his chosen successor, and the fact that he came to the throne only four years later in 268 BCE would indicate that there was a struggle between the sons of Bindusara for the succession. Ashoka had been the viceroy of Taxila when he put down a revolt against the local officials by the people of Taxila, and was later the viceroy of Ujjain, the capital of Avanti and a major city and commercial centre. As emperor, he is credited with building the monumental structures that have been excavated in the site of Pataliputra. He continued the tradition of close interaction with the Greek states in West Asia, and there was mutual exchange of emissaries from both sides.

The defining event of Ashoka’s rule was his campaign against Kalinga (present-day Odisha) in the eighth year of his reign. This is the only recorded military expedition of the Mauryas. The number of those killed in battle, those who died subsequently, and those deported ran into tens of thousands. The campaign had probably been more ferocious and brutal than usual because this was a punitive war against Kalinga, which had broken away from the Magadha Empire (the Hathigumpha inscription speaks of Kalinga as a part of the Nanda Empire). Ashoka was devastated by the carnage and moved by the suffering that he converted to humanistic values.

He became a Buddhist and his new-found values and beliefs were recorded in a series of edicts, which confirm his passion for peace and moral righteousness or dhamma (dharma in Sanskrit).

The edicts of Ashoka thus constitute the most concrete source of information about the Mauryan Empire. There are 33 edicts comprising 14 Major Rock Edicts, 2 known as Kalinga edicts, 7 Pillar Edicts, some Minor Rock Edicts and a few Minor Pillar Inscriptions. The Major Rock Edicts extend from Kandahar in Afghanistan, Shahbazgarhi and Mansehra in north-west Pakistan to Uttarakhand district in the north, Gujarat and Maharashtra in the west, Odisha in the east and as far south as Karnataka and Kurnool district in Andhra Pradesh. Minor Pillar Inscriptions have been found as far north as Nepal (near Lumbini). The edicts were written mostly in the Brahmi script and in Magadhi and Prakrit. The Kandahar inscriptions are in Greek and Aramaic, while the two inscriptions in north-west Pakistan are in Kharosthi script.

The geographical spread of the edicts essentially defines the extent of the vast empire over which Ashoka ruled. The second inscription mentions lands beyond his borders: “the Chodas (Cholas), the Pandyas, the Satiyaputa, the Keralaputa (Chera), even Tamraparni, the Yona king Antiyoka (Antiochus), and the kings who are the neighbours of this Antioka”. The edicts stress Ashoka’s belief in peace, righteousness and justice and his concern for the welfare of his people. By rejecting violence and war, advocating peace and the pursuit of dhamma, Ashoka negated the prevailing philosophy of statecraft that stressed that an emperor had to strive to extend and consolidate his empire through warfare and military conquests.

One of the major events of Ashoka’s reign was the convening of the Third Buddhist sangha (council) in 250 BCE in the capital Pataliputra. Ashoka’s deepening commitment to Buddhism meant that royal patronage was extended to the Buddhist establishment. An important outcome of this sangha was the decision to expand the reach of Buddhism to other parts of the region and to send missions to convert people to the religion. Buddhism thus became a proselytizing religion and missionaries were sent to regions outlying the empire such as Kashmir and South India. According to popular belief, Ashoka sent his two children, Mahinda and Sanghamitta, to Sri Lanka to propagate Buddhism. It is believed that they took a branch of the original bodhi tree to Sri Lanka.

Ashoka died in 231 BCE. Sadly, though his revolutionary view of governance and non-violence find a resonance in our contemporary sensibilities, they were not in consonance with the realities of the times. After his death, the Mauryan Empire slowly disintegrated and died out within fifty years. But the two centuries prior to Ashoka’s death and the disintegration of the Mauryan Empire were truly momentous in Indian history. This was a period of great change. 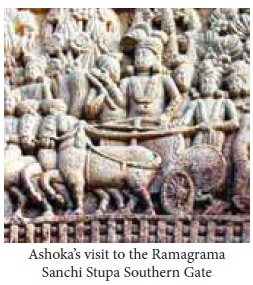 The consolidation of a state extending over nearly two-thirds of the sub-continent had taken place with formalised administration, development of bureaucratic institutions and economic expansion, in addition to the rise of new heterodox religions and philosophies that questioned the established orthodoxy.