Economy and Society - Emergence of State and Empire

Agriculture formed the backbone of the economy.

Agriculture formed the backbone of the economy. It was the largest sector in terms of its share in total revenue to the state and employment. The Greeks noted with wonder that two crops could be raised annually in India because of the fertility of the soil. Besides food grains, India also grew commercial crops such as sugarcane and cotton, described by Megasthenes as a reed that produced honey and trees on which wool grew. These were important commercial crops. The fact that the agrarian sector could produce a substantial surplus was a major factor in the diversification of the economy beyond subsistence to commercial production.

Many crafts producing a variety of manufactures flourished in the economy. We can categorise the products as utilitarian or functional, and luxurious and ornamental. Spinning and weaving, especially of cotton fabrics, relying on the universal availability of cotton throughout India, were the most widespread occupations outside of agriculture. A great varietyofclothwasproducedinthecountry, ranging from the coarse fabrics used by the ordinary people for everyday use, to the very fine textures worn by the upper classes and the royalty. The Arthasastra refers to the regions producing specialised textiles – Kasi (Benares), Vanga (Bengal), Kamarupa (Assam), Madurai and many others. Each region produced many distinctive and specialised varieties of fabrics. Cloth embroidered with gold and silver was worn by the King and members of the royal court. Silk was known and was generally referred to as Chinese silk, which also indicates that extensive trade was carried on in the Mauryan Empire.

Metal and metal works were of great importance, and the local metal workers worked with iron, copper and other metals to produce tools, implements, vessels and other utility items. Iron smelting had been known for many centuries, but there was a great improvement in technology after about 500 BCE, which made it possible to smelt iron in furnaces at very high temperatures. Archaeological finds show a great qualitative and quantitative improvement in iron production after this date. Improvement in iron technology had widespread implications for the rest of the economy. Better tools like axes made more extensive clearing of forests possible for agriculture; better ploughs could improve agricultural processes; better nails and tools improved woodwork and carpentry as well as other crafts. Woodwork was another important craft for ship-building, making carts and chariots, house construction and so on. Stone work–stone carving and polishing– had evolved as a highly skilled craft. This expertise is seen in the stone sculptures in the stupa at Sanchi and the highly polished Chunar stone used for Ashoka’s pillars. 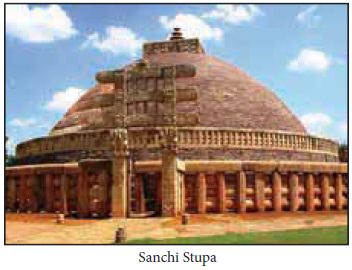 A whole range of luxury goods was produced, including gold and silver articles, jewellery, perfumes and carved ivory. There is evidence that many other products like drugs and medicines, pottery, dyes and gums were produced in the Mauryan Empire. The economy had thus developed far beyond subsistence production to a very sophisticated level of commercial craft production.

Crafts were predominantly urban-based hereditary occupations and sons usually followed their fathers in the practice of various crafts. Craftsmen worked primarily as individuals, though royal workshops for producing cloth and other products also existed. Each craft had a head called pamukha (pramukha or leader) and a jettha (jyeshtha or elder) and was organised in a seni (srenior a guild), so that the institutional identity superseded the individual in craft production. Disputes between srenis were resolved by a mahasetthi, and this ensured the smooth functioning of craft production in the cities.

Trade or exchange becomes a natural concomitant of economic diversification and growth. Production of a surplus beyond subsistence is futile unless the surplus has exchange value, since the surplus has no use value when subsistence needs have been met. Thus, as the economy diversified and expanded, exchange becomes an important part of realising the benefits of such expansion. Trade takes place in a hierarchy of markets, ranging from the exchange of goods in a village market, between villages and towns within a district, across cities in long-distance overland trade and across borders to other countries. Trade also needs a conducive political climate as was provided by the Mauryan Empire, which ensured peace and stability over a very large area. The rivers in the Gangetic plains were major means for transporting goods throughout northern India. Goods were transported further west overland by road. Roads connected the north of the country to cities and markets in the south-east, and in the south-west, passing through towns like Vidisha and Ujjain. The north-west route linked the empire to central and western Asia. Overseas trade by ships was also known, and Buddhist Jataka tales refer to the long voyages undertaken by merchants. Sea-borne trade was carried on with Burma and the Malay Archipelago, and with Sri Lanka. The ships, however, were probably quite small and might have hugged the coastline. 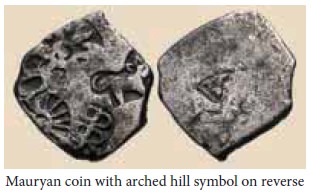 We do not have much information about the merchant communities. In general, long-distance overland trade was undertaken by merchant groups travelling together as a caravan for security, led by a caravan leader known as the maha-sarthavaha. Roads through forests and unfavourable environments like deserts were always dangerous. The Arthasastra, however, stresses the importance of trade and ensuring its smooth functioning. Trade has to be facilitated through the construction of roads and maintaining them in good condition. Since tolls and octroi were collected on goods when they were transported, toll booths must have been set up and manned on all the trade routes. Urban markets and craftsmen were generally closely monitored and controlled to prevent fraud. The Arthasastra has a long list of the goods – agricultural and manufactured – which were traded in internal and foreign trade. These include textiles, woollens, silks, aromatic woods, animal skins and gems from various parts of India, China and Sri Lanka. Greek sources confirm the trade links with the west through the Greek states to Egypt. Indigo, ivory, tortoiseshell, pearls and perfumes and rare woods were all exported to Egypt.

Though coinage was known, barter was the medium of exchange in pre-modern economies. In the Mauryan Empire, the silver coin known as pana and its sub-divisions were the most commonly used currency. 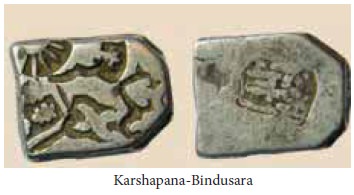 Hordes of punch-marked coins have been found in many parts of north India, though some of these coins may have been from earlier periods. Thus while coins were in use, it is difficult to estimate the extent to which the economy was monetised.

Urbanisation is the process of the establishment of towns and cities in an agrarian landscape. Towns can come up for various reasons – as the headquarters of administration, as pilgrim centres, as commercial market centres and because of their locational advantages on major trade routes. In what way do urban settlements differ from villages or rural settlements? To begin with, towns and cities do not produce their own food and depend on the efficient transfer of agricultural surplus for their basic consumption needs. A larger number of people reside in towns and cities and the density of population is much higher in cities. Cities attract a variety of non-agricultural workers and craftsmen, who seek employment, thereby forming the workforce for the production of manufactured goods and services of various kinds. These goods, in addition to the agricultural products brought in from the rural countryside, are traded in markets. Cities also tend to house a variety of persons in service-related activities. The sangam poetry in Tamil and the Tamil epics provide vivid pictures of cities like Madurai, Kanchipuram and Poompuhar as teeming with people, with vibrant markets and merchants selling a variety of goods, as well as vendors selling various goods including food door to door. Though these literary works relate to a slightly later period, it is not different in terms of the prevailing levels of technology, and these descriptions may be taken as an accurate depiction of urban living. The only contemporary pictorial representation of cities is found in the sculptures in Sanchi, which portray royal processions, and cities are seen to have roads, a multitude of people and multi-storeyed buildings crowded together.

One of the first pre-requisites for urbanisation is the development of an agricultural base. This had evolved in the Indo-Gangetic plain and from very early on there are references to cities like Hastinapura and Ayodhya. By about sixth century BCE, urbanization had spread to the doab and many new city centres like Kaushambi, Bhita, Vaishali and Rajagriha, among others, are mentioned in the region. Buddhist texts about Buddha’s preaching were always located in urban centres. Cities developed primarily because of the spread of agriculture and wet rice cultivation, in particular in the doab region, after the marshy land was drained and reclaimed for cultivation. The fertile soil and plentiful availability of water from the perennial rivers made it possible to raise even two crops of rice, and the production of a large agricultural surplus to feed the cities. The improvements in iron technology also had an impact on economic life both in rural and urban areas. As Magadha grew, many regional centres like Ujjain were also incorporated into the empire.

Towns were often located along the rivers, presumably for ease of access to transportation. They were surrounded by moats and a rampart to provide defensive protection. They were always open to attacks since treasuries holding government revenue were housed in them, in addition to the fact that as trading centres, the local people and merchants were also wealthy. As the towns became more prosperous, the quality of the houses, which were built of mud brick and even of fired brick, improved. Towns also had other facilities like drains, ring wells and mud pits, testifying to the development of civic amenities and sanitation. Excavations from the Mauryan period show that the standard of living had improved as compared to the earlier period. The houses were built of brick, and the cities had ring wells and soak pits. There was a quantitative increase in the use of iron and the variety of iron artefacts.

Pataliputra was the great capital city in the Mauryan Empire. It was described as a large and wealthy city, situated at the confluence of the Ganga and Son rivers, stretching in the form of a parallelogram. It was more than 14 kilometres in length and about 2

kilometres wide. It was protected by an outer wall made of wood, with loopholes for shooting arrows at enemies. There were 64 gates to the city and 570 watch towers. There was a wide and deep moat outside the wall, which was fed by water from the river, which served both as a defence and an outlet for sewage. There were many grand palaces in the city, which had a large population. The city was administered by a corporation of 30 members. Ashoka added to the magnificence of the city with the monumental architecture that he added to the capital, like the many-pillared hall.

Most of the literature and art of the period have not survived. Sanskrit language and literature were enriched by the work of the grammarian Panini (c. 500 BCE), and Katyayana, who was a contemporary of the Nandas and had written a commentary on Panini’s work. Buddhist and Jain texts were primarily written in Pali. Evidently many literary works in Sanskrit were produced during this period and find mention in later works, but they are not available to us.

The Athasastra notes the perform-ing arts of the period, including music, instrumental music, bards, dance and the-atre. The extensive production of crafted luxury products like jewellery, ivory carv-ing and wood work, and especially stone carving should all be included as products of Mauryan art.

Many religions, castes and communities lived together in harmony in the Mauryan society. There is little mention of any overt dissension or disputes among them. As in many regions of that era (including ancient Tamil Nadu), courtesans were accorded a special place in the social hierarchy and their contributions were highly valued.