During Dana Nanda’s reign, Alexander invaded north-west India (327–325 BCE). In many ways, the invasion by Alexander is a watershed in Indian history. It marked the beginning of the interaction between India and the West, which spanned many centuries to follow. Greek historians began to write about India, and Greek governors and kings ruled in the north-western region of India, which introduced new styles of art and governance. After his conquests in the Punjab region, Alexander expressed his desire to march further east to attack the Magadha Empire. However, his already tired troops had heard about the great emperor in the east (Nanda) and his formidable army and refused to be engaged in a war against such a powerful adversary. 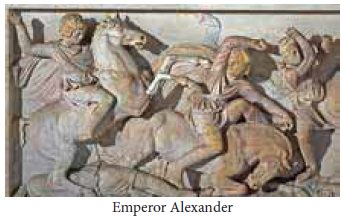 In 326 BCE when Alexander entered the Indian subcontinent after defeating the Persians, Ambhi, the ruler of Taxila, surrendered and accepted the suzerainty of Alexander. The most famous of Alexander’s encounters was with Porus, ruler of the region between Jhelum and Beas. The two armies met in the battle of Hydaspes in which Porus was imprisoned. Later, impressed by the Porus’s dignity, Alexander restored his throne on the condition of accepting his suzerainty. His battle-weary soldiers refused to march further. Alexander did not want to proceed against the reluctance of his army. During his return, Alexander died of typhoid in Babylon. 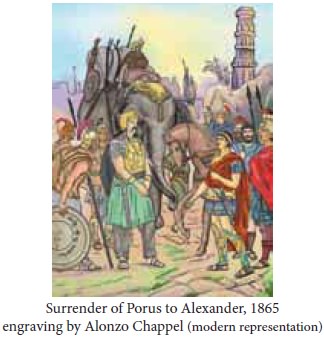 The Impact of Alexander’s Invasion

Alexander’s invasion led to the establishment of Greek satrapies in the north-western region of the Indian subcontinent. Trade routes opened up with the West. There were four different trade routes in use, which facilitated the movement of Greek merchants and craftsmen to India, establishing direct contact between India and Greece. As trade contact increased, many Greek settlements were established in the northwest of India. Alexandria near Kabul, Boukephala near Peshawar in Pakistan and Alexandria in Sindh were some of the prominent Greek settlements.

The Greek accounts of India provide valuable information but with a bit of exaggeration. Alexander’s death created void in the north-west, facilitating the accession of Chandragupta Maurya to the throne of Magadha. It also helped him to conquer the numerous small chiefdoms in the north-west and bring the region under his empire.