Mass selection, or individual selection, is based on characteristics of the individuals under selection as opposed to selection based on the performance of their relatives.

Mass selection, or individual selection, is based on characteristics of the individuals under selection as opposed to selection based on the performance of their relatives. It is one of the simplest and most common methods employed in breeding programmes, where the character-istic to be improved is easy to measure. It can be used efficiently in selection for growth rate and to some extent for age at maturity. As stated above, response in mass selection

(R) is determined by the general equation

S = selective differential (the difference in a certain trait between the individuals selected and the population as a whole),

h2 = heritability of the differences (the share of additive genetic variation in the general variation of the character), and

i = intensity of selection.

The high fecundity of cultivated fish causes high selective potential and intensity of selection compared to domestic animals and poultry. In performing mass selection in fish breeding, the selection severity coefficient or the rejection rigidity factor (V) is calculated by the equation:

n =the number of individuals selected and 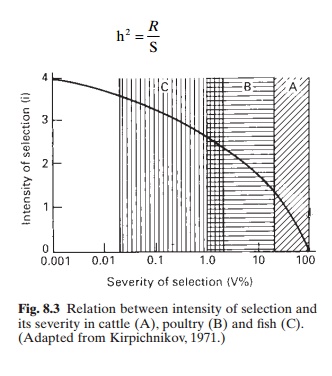 To obtain the estimate, selection has to be conducted in several successive generations.

For increasing response in mass selection, the values of i, s and h2 have to be increased. The value of i can be raised in fecund fish by increasing the number of individuals and, through this, increasing the severity of selection. Variability should relate only to genetic and not environmental variation, as the latter is conditioned by the non-additive genetic variation. To increase h2 values, non-related individuals have to be crossed. Outbreeding increases the degree of heterozygosity, i.e. increase in genetic variation, but inbreeding results in higher homozygosity. A sufficient number of fish should be available every year for crossing, to enable selection of fish from different crossings for breeding purposes. Another method of increasing genetic variation is by speeding up the process of mutation through irradiation and chemical mutagens.

Non-hereditary variation can be depressed by following special rearing methods such as growing spawners under favourable conditions for maturation, simultaneous crossings, incubation of all eggs under identical physico-chemical conditions, growing larvae and young ones under conditions that do not promote food competition, avoiding the mixing of stocks grown in different ponds or enclosures, and by selection at the age when the animal is more susceptible to improvement by selection.

It is necessary to point out here that a long period of one-way selection for certain characteristics may bring about changes in other morphogenetically or genetically correlated characters. There are many observed examples of correlated responses in selection of non-selected characters, such as physiological and biochemical factors (Steffens, 1964), growth rate (Moav and Wohlfarth, 1967), fecundity, etc.