Genetic selection and hybridization in Aquaculture

The use of genetically selected strains and hybrids has contributed very substantially to modern agriculture and animal husbandry.

The use of genetically selected strains and hybrids has contributed very substantially to modern agriculture and animal husbandry. But aquaculture is yet to gain much from efficient breeding and selection programmes. Among the many reasons for this are the delays in the development of suitable techniques for controlled reproduction of many farmed species and the paucity of genetic expertise among aquaculturists. Genetic improvements usually require long-term experimentation with a large number of individuals and generations, and so considerable time may elapse before useful results become available. Moreover research on farming technologies has not reached that level in most cases, when the only way to improve production is by genetic improvement of the stocks. Except in a few cases, the present technologies are too inefficient to benefit from the use of selected stocks.

In traditional aquaculture, certain strains have evolved as a result of environmental or farming conditions without much conscious effort by the aquaculturist, as in the case of the common carp, or as a result of rule-of-thumb selection. These more or less accidental strains can seldom be used with confidence for commercial farming.

There is no doubt that effective selective breeding programmes are expensive and require more facilities than are presently available in most aquaculture farms or even institutions that can function as central stations for breeding and distribution of aquaculture species. Though the economic benefits of selection programmes have been worked out for domestic animals, comparable evaluations are few in aquaculture.

As pointed out earlier, the number of domesticated species used in aquaculture for food islimited (unlike culture of ornamental species), but the number is steadily growing. Opportunities to increase the production properties and adaptation to a new environment of species through selection can therefore be expected to expand in the future. Kirpichnikov (1966) gives some of the main aims of fish selection as follows:

1.        to increase the growth rate by better utilization of food (physiological decrease of food expenditure per unit of growth increment);

2.     to increase the growth rate by fuller utilization of natural food in ponds and higher consumption of feed mixtures;

3.     to increase resistance to oxygen deficiency, to high or low temperature, to higher salinity or to other deviations from the normal environmental conditions;

4.     to improve resistance to infectious diseases and to infestation of parasites (to develop new breeds resistant to particular diseases);

Other aims may include speeding up of sexual maturation, the ability to reproduce at relatively low temperatures and the slowing down of maturation to prevent early switching over of metabolism to develop sex products, affecting growth and resulting in prolific reproduction.

The main disadvantages of fish for genetic breeding are the rather long generation interval of many species, particularly in cold climates, and the hierarchies that may develop in fish populations and that may contribute to size variations.

Genetic gains through selection, as in the case of salmonids, are dependent on selection differentials and genetic variance of the relevant traits, which are inversely related to the length of the generation interval. Gjedrem (1983) presents average estimates of heritability and a coefficient of variation (CV = (sp/x) x 100) of several species, as shown in Table 8.1. 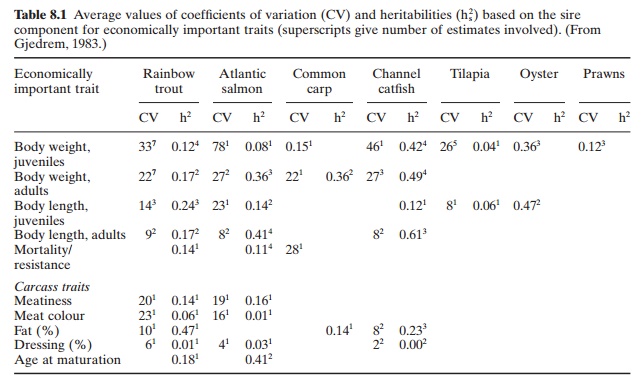 The relative advantages of a fish in genetic breeding schemes are brought out by Skjervold (1976), using salmonids as an example. Among the most important of these are:

·           External fertilization, which makes it possible to have several combinations of matings and the production of many ‘litters’ of large numbers of half-siblings.

a)        some types of family selection, even when the heritability of the selected trait is low, as large family groups will in practice result in rather accurate estimation of the breeding value;

b)       progeny testing among females, which can be carried out by using mixed sample of semen, or semen from sires of known breeding value;

c)        the improved possibility of estimating non-additive genetic components, because of the combination of high female fertility and external fertilization;

d)       artificial manipulation of chromosome content, which is facilitated by external fertilization; and

e)        easier hybrid production due to high female fertility and the remarkable ability for crossing as observed in nature.

The high phenotypic variance of the body weight of adults, together with the medium heritability as seen in Table 8.1, show that there is a large genetic variance for this trait for these species. Though mortality shows low heritability, resistance to specific diseases shows medium to high heritability. Similarly, the meat quality traits show some genetic variation, though it is low in the dressing percentage. Age at sexual maturation shows medium heritability in rainbow trout but a high one in the Atlantic salmon. The conclusion is that the possibility of genetic gains from selection programmes in aquatic animals is high and compares favourably with terrestrial animals and plants.