The. common examples of mass transfer in our everyday life and in many

-  diffusion of smoke discharged by tall chimney into the atmosphere,

-  a drop of ink diffusing in a glass of still water,

-  evaporation of a drop of perfume in a room,

-  humidification of air flowing over a spray pond or cooling tower,

-  mixing of diesel or petrol with air inside an internal combustion engine,

-  diffusion of neutron in a nuclear reactor.

There are basically two modes of mass transfer:

(i)  Mass Transfer by Diffusion - the transport of mass by random molecular motion in quiescent or laminar flowing fluids is known as mass transfer by 'diffusion' and is analogous to heat transfer by conduction. Mass transfer by diffusion occurs due to (a) concentration gradient,

(ii)    Convective Mass Transfer - the rate of molecular diffusion of mass can be accelerated by the bulk motion of the fluid. Mass can be transported between the boundary of a surface and a moving fluid (drying of clothes, molecular diffusion of a sugar cube in a cup of coffee by stirring, moist air flowing over the surface of an ocean and precipitation on a dry land etc.), or between two moving fluids which are relatively immiscible (formation of clouds, vapourisation of water in a tea kettle). This mechanism of mass transfer is called 'convectIve mass transfer' and is analogous to heat transfer by convection (free or forced).

For a mixture of ideal gases, we have

where PA is the partial pressure of the species A and so on.

Dalton's law was reformulated by Gibbs to include a second statement on the properties of mixtures. The combined statement is Gibbs-Dalton law:

There are a number of ways by which the concentration for a species in a multicomponent mixture can be defined:

(i) Molar Density or Molar Concentration, CA = number of moles of the species A per unit volume of mixture, kg-mol/m3

A = mass of the species A per unit volume of the mixture, kg/m3.

Since the number of moles = mass of species/molecular weight, we have

For a perfect gas, we have:

PA V =n A R oT , where Ro is the universal gas constant,

Fluxes: The mass flux of species A can be expressed relative to either a fixed observer or an observer moving with the bulk velocity. For a stationary observer, the absolute flux of any species A will be equal to the sum of the flux due to the molecular diffusion and that due to the bulk motion.

The fundamental equation (one-dimensional) of molecular diffusion is known as Fick's law. It has been derived from the kinetic theory of gases, and can be written for a binary mixture as

JA = molar flux in the X-direction relative to the molar average velocity, 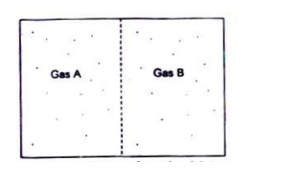 Fig. 5.1 Diffusion of species A in to species B 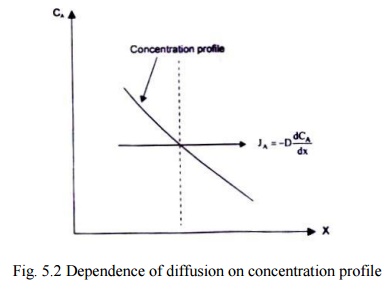 * This law assumes that fluxes are measured relative to the coordinates that move with the average velocity of the mixture.

Diffusion coefficients for gases depend upon pressure, temperature and other molecular properties of diffusing gases. At two different pressure and temperature, we have 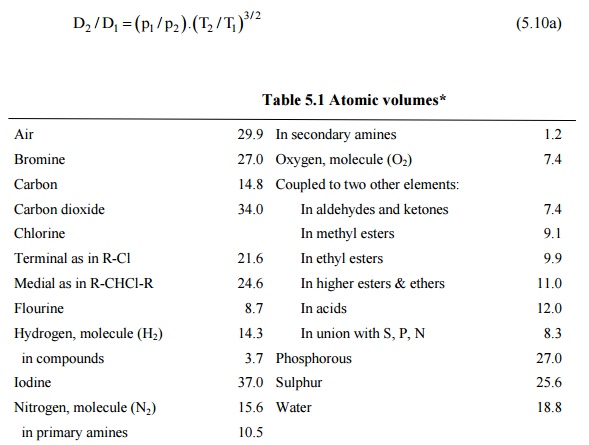 (ii) Diffusion in Liquids and Solids - Diffusion in liquids occurs at much slower rate than in gases. Since kinetic theory of liquids is not as much developed as that of gases, it is usually assumed as a first approximation that equations of the same general form are applicable to the diffusion of a solute in a solvel1t as to the diffusion in gases, i.e., Fick's law is assumed valid for liquids.

Diffusion in solids is much slower than in liquids. Diffusion of solids in solid has limited engineering applications but diffusion of fluids in solids have extensive applications. Fick's law is sometimes used, with an empirically determined effective diffusivity which takes care of the structure of solid. A typical problem of liquid transfer in a solid, of interest, is drying of solids.

Since the characteristic gas constant of a gas is: RA = Ro/MA

When we have equimolal counter diffusion, shown in Fig. 12.3 (a, b), the steady state molal diffusion rates of the species A and B, represented by NA and NB will be given by

The total pressure of the system remains constant at steady state,

Since each molecule of A is replaced by a molecule of B, the molal diffusion rates must be equal. Thus: NA = –NB, and

This fact is known as the equivalence of diffusion coefficients or diffusivities in binary mixtures, and is a property of the binary mixture.

corresponding to the nomenclature used in Fig. 5.3 (a, b). Table 5.2 gives the values of the binary diffusion coefficients. 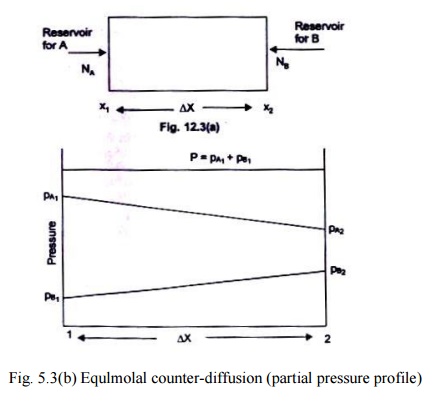 (iv) It does not tell about diffusion due to temperature or pressure gradient or due to external forces.

Let us consider a tank containing water which is exposed to air in the tank as shown in Fig. 5.4. We assume that:

(i) the system is isothermal,

(iii) the system is in steady state. Since there has to be a little movement of air over the top of the tank to remove the water vapour that diffuses to that point, the air movement does not create any turbulence to alter the concentration profile in the tank, and

air and water vapour both behave like ideal gases. 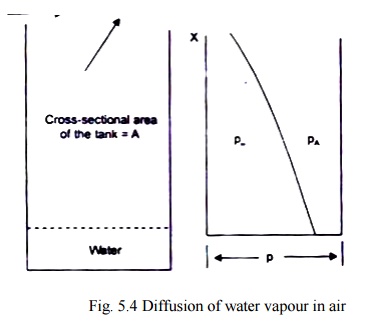 From Eq. (5.10), the downward diffusion of air can be written as

and this has to be balanced by the bulk mass transfer upward. Therefore, 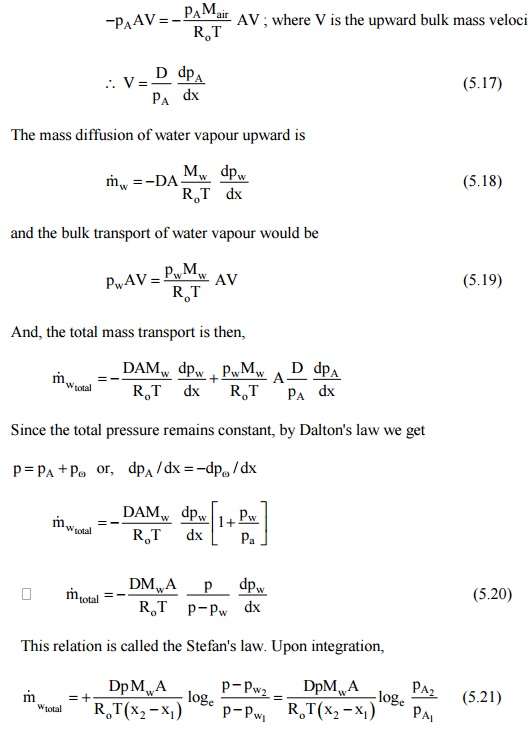